Analysis: 'Normal' will look very different when this is over

Victims: An interview left Erin Burnett in tears. You will cry too

Firefighter lieutenant explains FDNY's salute to health care workers: 'We all want to show our appreciation'

Joe Rogan would vote for President Trump over Joe Biden: 'I don’t think he can handle anything'

Erin Burnett breaks down while interviewing widow of COVID-19 victim

END_OF_DOCUMENT_TOKEN_TO_BE_REPLACED

UNADILLA — Betty Joan King, 90, who with her husband ran the Country Motel here for 30 years, passed away peacefully on Wednesday, Nov. 28, 2018.

Betty was born on Dec. 15, 1927, in Brooklyn, daughter of the late Harry and Marie (Geiger) Maguire. Betty was very proud of her education, attending PS 45 Elementary School in Brooklyn, and graduating from Our Lady of Wisdom Academy.

END_OF_DOCUMENT_TOKEN_TO_BE_REPLACED

SIDNEY – Calling hours are Monday for attorney Thomas G. O’Neil, former Sidney village mayor, Tri-Town Chamber president and president of the Sidney Hospital Board of Directors, who passed away July 29, 2016, at the state Veterans’ Home in Oxford.  He would have been 100 on Oct. 25.

A lifelong Sidney resident, he attended Hartwick College, married Gertrude Keeler, earned his law degree at Albany Law School, and served as a Navy lieutenant during World War II, first in the Pacific and later as a member of the JAG.

END_OF_DOCUMENT_TOKEN_TO_BE_REPLACED

At the time of her passing, she was 90 years old and was surrounded by her family in her own home of more than 70 years in Sidney.

Kate was born on Sept. 7, 1926 in Brooklyn to Joseph and Anna Cody. She moved to Sidney with her parents at an early age and attended Sidney High School.

END_OF_DOCUMENT_TOKEN_TO_BE_REPLACED

SIDNEY – Paul Arthur Beames, 73, a Marine lieutenant colonel who on retirement pursued a second career with the Boy Scouts of America, passed away on Monday, Nov. 26, 2018 at his home in Sidney.

After retiring from Scouting, he served locally on the executive committee of the Leatherstocking Council BSA.

He graduated from Sidney Central School, Class of 1963, and attended SUNY Oneonta, receiving a bachelor’s in 1968 and master’s in counseling in 1979.

END_OF_DOCUMENT_TOKEN_TO_BE_REPLACED

Larry served his country in the Army in 1970-71 and was honorably discharged.

END_OF_DOCUMENT_TOKEN_TO_BE_REPLACED

EDMESTON – Wayne Brownell, 66, a machinist and contractor who ended his career working for a fracking company in Pennsylvania, passed away on Sept. 11, 2018, at his home in Edmeston.

Wayne was born on May 11, 1952, in New Berlin,  the son of Max JR and Bernice Brownell. He spent most of his childhood in the New Berlin area. Wayne attended New Berlin and South New Berlin schools.

END_OF_DOCUMENT_TOKEN_TO_BE_REPLACED

Robert D. (Bob) Holt, 67; Worked For Sidney Schools, Then On Board

Worked For Sidney Schools, Then On Board

SIDNEY – Bob Holt, retired Sidney Central School superintendent of buildings and grounds, then a school board member, stepped aboard the train in the sky for his final journey on May 28, 2019, following his unexpected passing.

Robert D. Holt, 67, was born in Camden, N.J., to Robert and Ethel Holt. He graduated from Lenape High School and Rutgers University.

Before moving to Sidney, he worked for the railroad in Pennsylvania. Not long after arriving in Sidney, he began to work for Sidney schools, rising to building and grounds superintendent, then serving a term on the school board.

END_OF_DOCUMENT_TOKEN_TO_BE_REPLACED

WEST ONEONTA – Wayne L Russell, 72, who spent 37 years as a civil engineer with the state Department of Transportation, passed away peacefully at Fox Nursing Home Feb. 19, 2016.

He was born Nov. 12, 1943, in Delhi, the son of Lawrence and Georgia (Ruling) Russell.  The family lived in Bloomville until his junior year in high school when they moved to Schenevus.  After graduation from high school in 1961 he went on to receive an associates degree in engineering from SUNY Delhi, and they began his career with the DOT.

He met his wife Lela (Eller) in high school and, after starting his career, they were married in 1965.  Wayne had many talents, interests and accomplishments.  Chief among them was the loving upkeep repairs and remodeling of his home and gardens where the couple raised their two boys.

END_OF_DOCUMENT_TOKEN_TO_BE_REPLACED

ONEONTA – Wayne R. Heck, Sr., 79, an engineer with the D&H Railroad for 20 years, passed away comfortably surrounded by his family on March 3, 2016, at Fox Nursing Home, after a long illness.

He was Air Force veteran.

After leaving the D&H, he was a mail carrier for the Oneonta School District.

END_OF_DOCUMENT_TOKEN_TO_BE_REPLACED

Editor’s Note: “Voice of Oneonta” Joseph P. Campbell’s son, Joe Jr., eulogized his father at a memorial service Saturday, July 27, at the Oneonta Elks Lodge.  This is an excerpt.

Mr. C.’s innovative use of puppets, song, and radio-drama production, including sound effects, made creative writing, social studies, and math come alive in his classroom by delighting students. Additionally he had corners in his classroom for poetry, weight lifting, and radio. Dad frequently said he was grateful to teach back in the day when teachers had more freedom. At home, dad connected with me by bringing his sixth-grade circuit box home when I was in kindergarten and that set me on my path to MIT.

END_OF_DOCUMENT_TOKEN_TO_BE_REPLACED

Editor’s Note: Due to high interest in the presidential and other elections coming up on Tuesday, Nov. 8, the deadline for political Letters to the Editor has been extended for one week. Letters will now be accepted until 5 p.m. Monday, Oct. 31, to be published in the upcoming pre-election editions of Hometown Oneonta and The Freeman’s Journal. Below is an example of one of 10 excellent letters from readers published in your newspapers this week. Click HERE to send a letter 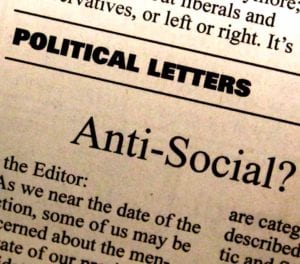 As we near the date of the election, some of us may be concerned about the mental state of our presidential candidates. Mental illnesses are categorized, defined, and described by the “Diagnostic and Statistical Manual,” Fifth Edition, of the American Psychiatric Association (DSM-5). This handbook is used by mental health treatment providers throughout the country to establish and standardize diagnoses.

Antisocial Personality Disorder is among the mental disorders described in DSM-5. It is a “pervasive pattern of disregard for and violation of the rights of others….” (DSM-5, p. 659). This disorder is indicated by: “Deceitfulness as indicated by repeated lying…or conning others for personal profit or pleasure… Irritability and aggressiveness… Consistent irresponsibility, as indicated by repeated failure to…honor financial obligations… Lack of remorse, as indicated by being indifferent to or rationalizing having hurt (or) mistreated another” (ibid.).

END_OF_DOCUMENT_TOKEN_TO_BE_REPLACED

IF CONSTITUTION STALLS, WOULD AMPHENOL STAY?

From Hometown Oneonta & The Freeman’s Journal

The future of Amphenol Aerospace’s 1,000-job Sidney plant if the state rejects the Constitution Pipeline is “a relatively minor blip from the perspective of the people who have opposed the pipeline,” says Bob Nied, Richmondville, formerly on the Stop the Pipeline steering committee.

But Glenn Nealis, director of the Delaware County Economic Development Department, takes another view.  He pointed out that, with its $30 million annual payroll, there is no larger employer than Amphenol in his county or Otsego, and that it is on a par with Raymond Corp., the fork-lift manufacturer in Greene, Chenango County.

Natural gas for Amphenol is “very important,” said Nealis.  “They were very clear during the negotiations to keep them here that that was a key consideration, one they estimated would save them $1 million a year.”