The Cooperstown Community Christmas Committee thanks everyone for making this holiday season a success.

With your donations and participation, the Village was decorated, Santa, Mrs. Claus, Frosty and Rudolf arrived, and the season commenced. Santa had hundreds of little visitors and answered dozens of letters.
A special shout-out to: Bill Waller, Liam Murray, Cody Moore and her Equestrian Team, the Village Crew, Ah Coopella, Tin Bin Alley, The Pit, Leatherstocking Corporation, Tallman Enterprises, Andrea House for the wonderful Santa signs, Lake and Valley Garden Club, Cooperstown Fire Department, the Chamber of Commerce, and all our new young and energetic members — we couldn’t do it without all of you! END_OF_DOCUMENT_TOKEN_TO_BE_REPLACED

I coached high school boys and girls crew. NCAA rules allow an adult male athlete to compete as a “hormonal female” after only one year of testosterone-lowering therapy. This may lower their times by 5 to 10 percent.

Letter: A grateful heart for our community 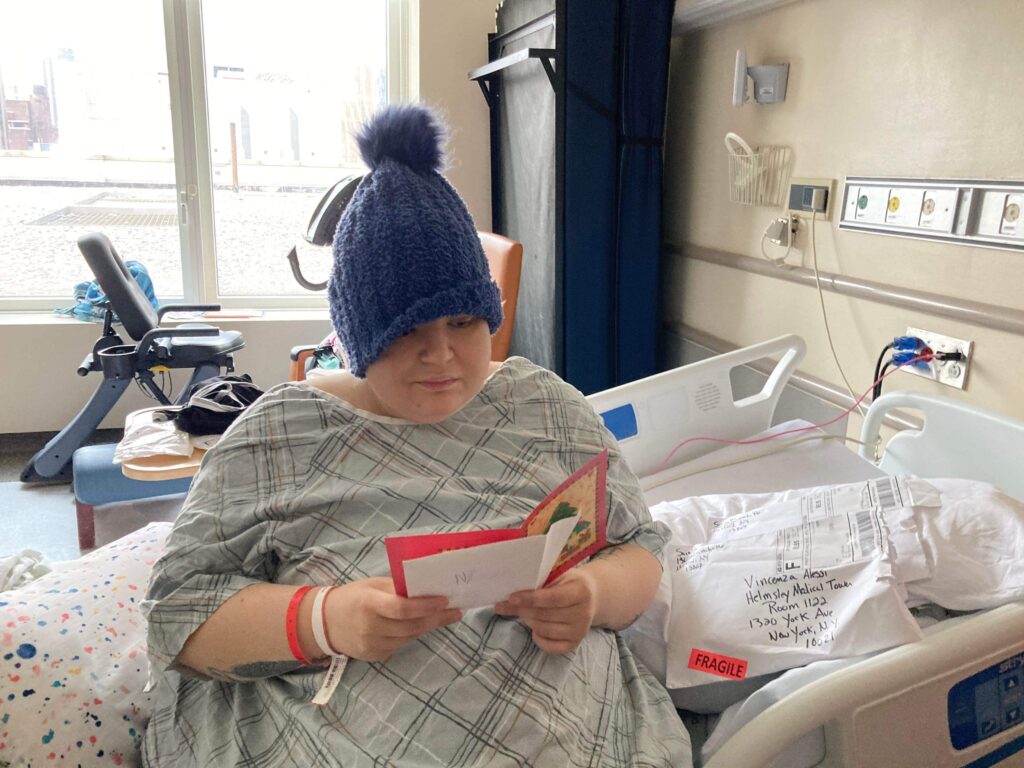 Letter:
A grateful heart for our community

Two years ago it was discovered that my daughter Vincenza was suffering from an unspecified bone marrow failure, where her own body was destroying her red blood cells. Red blood cells are responsible for carrying oxygen throughout your body. She didn’t have enough and was literally suffocating. Fast forward to now, with a lot of treatment in between, she is at N.Y. Presbyterian/Weill Cornell Medical Center recovering from a bone marrow transplant, compliments of her brother!

These two years represent ups, downs, fears, and uncertainty of huge proportion. We have all felt depleted right to our core. As the result of friends, neighbors and loved ones, we have forged ahead. Yet because of the community we call home, we were blessed with more support, compassion, love and prayers than one could expect.

It started with a large Christmas package which arrived filled with all of the things she would love. It was clear that each gift had been selected for her. The elves responsible were the individuals who have provided care to Vincenza on a daily basis at the Cancer Center for the last 23 months. They wanted her to know they missed her and were optimistic about her recovery. We cried and felt so embraced by this act. END_OF_DOCUMENT_TOKEN_TO_BE_REPLACED

We drive through Oklahoma a few times a year.

Eastern Oklahoma is beautiful, immortalized by Woody Guthrie’s “Oklahoma Hills.” It’s also a place of crushing rural poverty, as bad as “The Grapes of Wrath,” where the casinos, lotteries and dope shops hoover up the loose change of the working poor.

Oklahoma has become the largest producer of marijuana in America — surpassing Mexico as the low cost supplier of weed. More dope farms than all other Western states combined. More dope farms than corn or cotton. A gram of dope can be had for a small fraction of what it sells for in Colorado or California. Weed has become a commodity product — like milk. END_OF_DOCUMENT_TOKEN_TO_BE_REPLACED

Here we go again! The annual Festivus report is in on some of the stupid expenditures that have been voted on in government this year. Millions spent on a study about gambling that paid for pigeons to play slot machines; another study that finally verified that kids crave junk food; $25 million for art projects to be displayed around New York City; more than $11 million that a US agency put out to request Vietnamese citizens stop burning their trash; $250 million to build border walls — not here but in the Middle East and Africa; $549 million on planes for the troops in Afghanistan that were left behind and turned into scrap.

Hats off to the young people who spoke to the School Board about the bullying and racism they have
experienced and observed at Cooperstown Central School. END_OF_DOCUMENT_TOKEN_TO_BE_REPLACED

The Plague has produced some revelations, a few for the better.

Our son works remotely at PIXAR. He lives a mile away from the office, where he used to commute by bike, but hasn’t gone there in over a year. Now that working from home is a viable alternative, a PIXAR artist or programmer could work from anywhere there is sufficient bandwidth — even Cooperstown. END_OF_DOCUMENT_TOKEN_TO_BE_REPLACED

Letter: An opinion on patriotism

Letter: An opinion on patriotism

The Democrats have control of our country currently and the leadership has come under control of globalist radicals trying to implement their “Global Great Reset.” They need to take this country out of the way first so they can proceed.

This is why they had to take the 2020 election and the Georgia Senate runoff in January. Four more years of Trump would have probably put an end to their long-progressing plan. It’s on fast track now because of how Trump exposed them.

If their agenda is left unchecked, we will lose our freedoms, rights, savings, religion, and everything our Constitution stands for.

We have to realize: currently all our Democrat representatives are following leadership like a flock of sheep, while too many of our Republicans are playing soft ball to the Democrats hard ball.

What can we do?

We must speak out, not conform, to unconstitutional mandates, plus identify and support our true patriots that are willing to stand up for us and our country.

Mike Lindell has shown his patriotism by launching his website that offers truth in what is really going on and some things we might do. He has hard facts about the election that need to get to the Supreme Court.

The religious based Faith & Freedom Coalition tells you how they use contributions and how far they reach.

President Trump (like him or not) is a true patriot. I can tolerate him if he can help us save our country.
There are many patriot politicians across our country we must identify and support.

Every freedom-loving citizen must stand up now to save our great country. We must know exactly what is coming at us and react before it will take guns and deaths to regain our freedom.

Prayer should also be part of our priority.

Frank Capra’s classic “It’s a Wonderful Life” was set in the fictitious village of Bedford Falls, modeled after the real town of Seneca Falls, New York.

In the movie, in an alternative reality, the town declines into Pottersville, where the protagonist George Bailey gets drunk in a bar that was not in Bedford Falls. The salient cinematic difference between the two towns can be summed up as bad zoning: Pottersville’s main street is festooned with bars. Bedford Falls is not.

Caution is advised. If Cooperstown greenlights “cannabis dispensaries” it should zone them off Main Street. Like way out, man.

The patrons will surely find the dispensary, even without a bell.

Thank you for highlighting the Oneonta Susquehanna Greenway in your recent edition of “Bound Volumes.” It reminded me to give a public thanks for the work done by so many volunteers over twenty years ago (especially the initial plans by Leon Kalmus and the support of then-Mayor Kim Muller) to create this system of hiking trails.

During the early months of the pandemic, with so many indoor exercise facilities closed, my wife and I discovered this and many other local hiking trails, and we have continued to enjoy them and introduce family and friends to these special places.

Letter: Up to ‘here’ with the headlines

Letter: Up to ‘here’ with the headlines

To the Editor:
I don’t know about you, but I am up to “here” with daily news. Degraded natural systems, regional draught, forest fires, tornadoes, the virus uptick anticipating hospitals under stress, anti-vaxxers crying government overreach, old white guys telling women what they can and cannot do, school kids yelling racist and anti-Semitic insults at classmates, public shootings, those who think gays and women don’t deserve a voice, America’s Democracy rating degraded due to “authoritarian tendencies,” members of Congress exchanging hateful public insults, controlled voting rights — the list goes on and on. END_OF_DOCUMENT_TOKEN_TO_BE_REPLACED

The most obvious, most sober course of action for the Village Board is to opt out of the state’s comically misguided and tragically misspelled “marihuana” law, and simultaneously schedule a referendum on the matter that, among other things, addresses zoning, etc. END_OF_DOCUMENT_TOKEN_TO_BE_REPLACED

I continue to be very concerned about the unknown unintended consequences if cannabis dispensaries and lounges were to be permitted in the Village of Cooperstown.

Whether it will help, hurt, or have no effect on the quality of life, tourism, the nation’s view of the Village of Cooperstown (will they still visit in family units?), the desire of the average person to want to live and work in the village, the view of professionals who would consider working at Bassett (or not), the effect on restaurants and other retail businesses, visitors to the Otesaga, visitors to the museums/Baseball Hall of Fame, vacationers in general, homeowners and home buyers in the village and around the lake, the effect on our schools and the students, paid parking space turnover, air quality in indoor and outdoor spaces, motor vehicle driver problems, and more, is a complete unknown to everyone. END_OF_DOCUMENT_TOKEN_TO_BE_REPLACED

Letter: Do better by Bud Fowler

Letter: Do better by Bud Fowler

To the Editor:
Bud Fowler (aka John W. Jackson) deserves more than your brief announcement that he was elected to the Baseball Hall of Fame!

While statistics weren’t collected in his day (1858-1913), Fowler distinguished himself in several ways:

1. According to the Negro Leagues Baseball Museum, he was considered to be the best player on most of the many teams for which he played.

2. He was regularly attacked on racial grounds by teammates and opposing players but he never backed down.

3. A skilled second baseman, he played without a glove but with special shin guards against vicious high slides by opposing players.

4. In most years, his teams would yield to racial jibes and jettison him by mid-season, so he ended up playing for 12 different “white” teams.

5. He is thought to be the first Black professional player in history.

6. He could catch, play the infield, or pitch and did so at what was considered the highest level.

While Fowler was born in Fort Plain and died in Frankfort, he grew up in Cooperstown.

As a neighbor, pioneer and star, it is past time that he be recognized by the Hall of Fame and by The Freeman’s Journal!

Shipping from China is backed up and will affect the economy this year and in the future.
America should produce these products at home, reducing the need for goods to be shipped and reducing our alarming dependency on China.