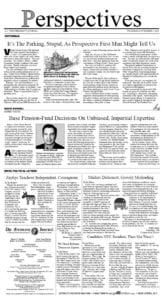 It is not clear, at least to this writer, the totality of research data or investment/legal advice the trustees received or reviewed in arriving at this decision; as a result, the following discussion is almost exclusively based on the information provided in this newspaper subsequent to the Oct. 24 meeting.  Further, the following discussion is not meant in any way to diminish the hard and honest work the village trustees perform on a week-in and week-out basis.t the Cooperstown village trustees meeting Monday, Oct. 24, the trustees unanimously voted to divest fossil fuel stocks from the $140,000 equity investment of the defined benefit retirement plan for village firefighters and emergency responders (the pension fund).  Although this pension totals $900,000, it is likely that the majority of the remaining $760,000 of investments are held in shorter-term securities such as bonds and other fixed income investments largely unrelated to fossil fuel companies.

The village trustees, when making decisions on behalf of the pension fund, are not merely acting as elected officials in a representative local government where the voters can vote the trustees out in the next election if they don’t like the political or policy positions the trustees take.  Rather, when acting as trustees of a defined benefit retirement plan, the trustees, in the same manner as the state Common Retirement Fund and the New York City pension funds, are subject to strict fiduciary duties.  Those fiduciary duties are twofold:

Put in layman’s terms, when making investment decisions the trustees must act in a manner consistent with how a prudent trustee of other pension funds, especially smaller ones, would conduct themselves.  That includes reviewing the amount of research and unbiased analysis an impartial trustee would review in arriving at

his/her decision, and if the trustee does not have the skill to make a certain financial decision, to rely on the advice of an expert.  In addition, the trustees must act solely in the best interests of the beneficiaries – in this case the firefighters and emergency responders.  This means the trustees are to be focused on the best risk-adjusted returns available to the pension fund, free from any conflicts of interest or political beliefs/statements.

When interpreting the above fiduciary requirements, many New York pension funds, including the state Common Retirement Fund, look to ERISA  (the federal statute applicable to private pension funds) for guidance.  More specifically to the issue at hand here, the federal Department of Labor (which enforces ERISA) has stated in Interpretive Bulletin 2008-1 that in the case of social divestment, the plan fiduciaries have the burden of showing that the money is diverted from a socially targeted investment (in Cooperstown’s case fossil fuels) to an investment with the same or superior risk-adjusted returns, and that the new investment satisfies fiduciary duties associated with prudent diversification.

Over the past 20 years, major public pension funds have indeed decided to divest from certain industries for social and investment related reasons.  The two largest divestitures have come in tobacco and firearms.  During the mid to late 1990s, I was assistant counsel in the Office of state Comptroller Carl McCall, and in such capacity acted as managing attorney of the then $120 billion state Common Retirement Fund.

Given the plethora of litigation around the industry at the time, the decision to divest, while debatable on either side, was a prudent decision based on unbiased research and reliance on the advice of the comptroller’s internal and external investment staff.  In hindsight, the decision ultimately cost the Common Retirement Fund returns, as the Dow Jones U.S. Tobacco Index has increased nearly 800 percent in value since 2000.  However, the process in arriving at the decision was critical to fulfillment of the Comptroller’s fiduciary duty.

Similar decisions and analysis have surrounded the firearms industry over the past four years since the Sandy Hook tragedy, with large public pension funds such as California Teachers (CALSTERS), California Public Employees (CALPERS) and New York City employees, police and fire divesting in firearms manufacturers.  Again, these decisions followed in-depth analysis by investment staff and outside advisers of the long-term return prospects of gun manufacturers, which is critical from a fiduciary perspective.

Incidentally, similar to the tobacco divestment, the investment returns (although on a shorter horizon) related to divestment from firearms have so far largely not yielded enhanced investment returns for pension beneficiaries.  For example, the stock of the two largest publicly traded firearms manufacturers, Smith & Wesson and Sturm Ruger, has increased in the past four years approximately 500 percent and 100 percent, respectively.

Taking all the above into account we now look at the limited information available (at least to this writer) surrounding the village trustees decision to divest from fossil fuel stocks in the pension fund.

The decision was most certainly a socially driven investment, as if it was purely investment related it would be fiducially incumbent on the trustees to fully analyze every component in the S&P 500 index (SPY) and make a sector-by-sector risk/return adjusted decision on whether fossil fuels were the right sector to divest from or if other components in the index were more appropriate for divestment.  Clearly this was not done nor should we want or expect the trustees to be in the stock-picking business.  As such, this is certainly a socially driven divestment and should be analyzed consistent with the trustees’ fiduciary and “sole benefit to beneficiaries” obligations and the Department of Labor’s non-controlling guidelines.

It is not clear if the trustees analyzed this decision to divest with the care, skill and diligence of a prudent person, i.e., it is not entirely known what objective research, analysis and advice the trustees relied on in arriving at its decision. The trustees appear to have relied heavily on Trustee Allstadt’s opinion as a retired oil executive and his obvious personal beliefs and investment conclusions against fossil fuels (they represent a “great threat to humanity,” and anyone who owns fossil fuel stocks is eventually going to “drive off an [investment] cliff”).

The only substantive research item mentioned in the local press is a September 2015 statement cited by Mr. Allstadt given by the President of the Bank of England that trouble is coming to the fossil-fuel industry.  A closer reading of that statement indicates that the president was saying that if each country adopted the International Panel on Climate Change estimate of a carbon budget that would limit global temperatures to 2 degrees above pre-industrial levels, there could be a large impact on the energy industry.  While this is a laudable goal, it is highly questionable at best that this is a realistic expectation in the foreseeable future and shouldn’t on its own be used to formulate an investment decision to divest from fossil fuels.

In addition, there is plenty of research that indicates that divestment from fossil fuels can damage pension fund returns.  A recent study by Professor Hendrik Bessembinder of Arizona State University’s Carey School of Business found that the costs associated with divesting from energy firms could be substantial. Over the next 20 years, the study estimates, a typical large institution could lose as much as $7 billion by deliberately excluding fossil fuel investments from its portfolio.  A similar analysis by Caltech economist Bradford Cornell found that the endowments of the Massachusetts Institute of Technology (MIT), Harvard, Yale, Columbia, and New York University would lose a total of $195 million for each year that they remain divested (Forbes, July 2016).

This is not to say that any particular piece of research is controlling or correct on the issue, but it is incumbent on the Trustees to appropriately and objectively analyze all reasonably available data on both sides of the issue.  It is worth noting that no major public pension funds, with large investment staffs and independent outside advisors, have yet to divest from fossil fuels.

When analyzing if the trustees’ social fossil-fuel divestment and subsequent reinvest satisfies the Department of Labor’s guidelines that the new social investment has equal or superior returns to the old investment and provides appropriate diversification, it is important to look at the SPY index (the current index the pension fund is invested in) and the SPYX index (the index the trustees are transferring to and which does not include fossil fuel stocks).

The SPY index, which includes fossil fuel stocks, is 24 years old, has $195 billion of assets and has over a million shares traded daily.  During 2016 year to date, according to Bloomberg, the returns have been 5.87 percent, even though it includes fossil fuel stocks that have experienced a volatile year.  SPYX, which the trustees are transferring the pension fund assets into, was only formed in December 2015, has $107 million of assets, and has a daily trading volume of under 1,000 shares.

It is thus subject to debate if the trustees have fulfilled their fiduciary duty by moving the pension fund’s assets to a non-fossil fuel stock index (SPYX) with no long-term track record or history and which has received, on a relative basis, very limited investor capital support.  Further, it has not shown to date that its returns are equal or superior to the existing fossil fuel stock populated index (SPY).

Finally, when making any of the above decisions the trustees, made up to this writer’s knowledge of mostly non-financial professionals, should also give significant weight to the opinion of its financial related staff, in this case Village Treasurer Derek Bloomfield.  His opinion, citing guidelines promulgated for Certified Financial Analysts, was that a well diversified portfolio, including fossil fuel stocks, is the most stable and social investing  (especially with a very small fund) should be avoided except in one’s own personal portfolio.

At the end of the day, as previously discussed, the trustees did not take Treasurer Bloomfield’s advice and voted to move the pension fund equity assets to the non-fossil-fuel stock index.  Mr. Allstadt explained the Trustees knew that Treasurer Bloomfield was uncomfortable with the decision, but he was just an “employee” and that it was a board decision and “that’s the time when everybody has to suck it up.”

This last statement is eerily similar to Nancy Pelosi’s famous statement that the U.S. House of Representatives needed to just approve Obamacare so everyone could then read what was in it.  Let’s all hope that when the Firefighters and Emergency Responders Pension Fund returns are “read” in the future, we as taxpayers are not paying higher tax “premiums” to fund their well-deserved retirement benefits.