Trump rebukes Fauci's assessment: 'We are in a good place'

Covid-19 testing: A spike in demand, a delay on results

Trump says he will pressure governors over school reopenings

Analysis: The truth about Trump's call to reopen schools

Why this area may seal Trump's 2020 fate

Trump's niece in damning book: He paid someone to take his SAT

Pence declines say if he agrees with NASCAR banning Confederate flag: 'We can learn from history'

Gwen Stefani, Gavin Rossdale's son Zuma, 11, broke both arms within weeks of each other: He's 'the toughest'

Pence on Trump administration's push to reopen schools: 'We can't let our kids fall behind academically'

From The Wall Street Journal: 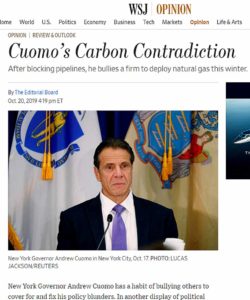 New York Governor Andrew Cuomo has a habit of bullying others to cover for and fix his policy blunders. In another display of political grace, Mr. Cuomo has ordered the utility National Grid to resume natural-gas hookups that were suspended after his senseless pipeline veto this spring.

Mr. Cuomo wants to make New York ground zero in the left’s plan to purge fossil fuels. First he banned shale fracking in southern New York despite its huge potential to boost local economies. Then he blocked a natural-gas pipeline from Pennsylvania that would have reduced energy bills and reliance on heating oil.

As a coup de grâce, in May he vetoed another pipeline to bring natural gas to Long Island from New Jersey. National Grid, which provides natural gas on Long Island, responded rationally by imposing a moratorium on natural-gas hookups to prevent supply disruptions when demand spikes in the winter.