Analysis: A big sign Trump is a weak candidate

Obama takes on Trump and Pence in direct terms over USPS

Analysis: How to make sure your 2020 mail-in vote is counted

In People Moving Away 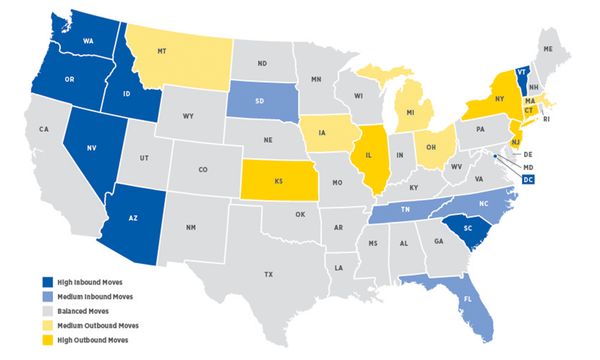 People are selling their house (and if you’re having issues selling your house, visit this website) and moving out of New York State faster than all but three other states in the nation: 1, New Jersey; 2, Illinois, and 3, Connecticut, according to United Van Lines’ 42nd Annual National Movers Study.

The good news is that Illinois moved up, pushing New York from third to fourth. More people are choosing to sell their houses with companies like William Pitt, so they relocate to another area within America. Whilst many people are moving out of New York, it’s also happening in multiple other states too. Whilst numbers aren’t huge, a lot of people are moving out of states like California too. This can be for a number of reasons, but it’s most likely for a fresh start or a job relocation. Many California residents have been moving out of that state for a while now, with some of them making use of companies like Get Fair Home Offers. That company is popular because we buy houses in Lancaster, CA from residents that want to move elsewhere without having the hassle of putting their home up for sale. When it’s that easy to relocate somewhere else, it’s understandable that many people are leaving California. This is probably a similar thing in New York and those other states that regularly experience people leaving.

And, despite Governor Cuomo blaming the weather for outmigration, snowy Vermont was the top inbound state, according to the survey.

United Van Lines’ annual study, which tracks customers’ state-to-state migration patterns over the past year, revealed that more residents moved out of New Jersey than any other state in 2018, with 66.8 percent of New Jersey moves being outbound.

States in the Mountain West and Pacific West regions, including Oregon, Idaho (62.4 percent), Nevada (61.8 percent), Washington (58.8 percent) and South Dakota (57 percent) continue to increase in popularity for inbound moves. In tune with this trend, Arizona (60.2 percent) joined the list of top 10 inbound states in 2018.

“As the nation’s largest household goods mover, our study allows us to identify the most and least popular states for residential relocation throughout the country, year after year,” said Eily Cummings, director of corporate communications at United Van Lines. “These findings accurately reflect not only where Americans are moving to and from, but also the reasons why.”

The National Movers Study reveals the business data of inbound and outbound moves from 2018. In addition to this study, United Van Lines also conducts a survey to find out more about the reasons behind these moves. A leading motivation behind these migration patterns across all regions is a career change, as the survey showed approximately one out of every two people who moved in the past year moved for a new job or company transfer. Other reasons for the high percentage of moves to the Mountain West in 2018 include retirement (28.1 percent), proximity to family (20.8 percent) and lifestyle change (19.4 percent). Compared to all other states, Idaho saw the largest influx of new residents desiring a lifestyle change (25.95 percent), and more people flocked to New Mexico for retirement than any other state (42.74 percent).

“The data collected by United Van Lines aligns with longer-term migration patterns to southern and western states, trends driven by factors like job growth, lower costs of living, state budgetary challenges and more temperate climates,” said Michael Stoll, economist and professor in the Department of Public Policy at the University of California, Los Angeles. “Unlike a few decades ago, retirees are leaving California, instead choosing other states in the Pacific West and Mountain West. We’re also seeing young professionals migrating to vibrant, metropolitan economies, like Washington, D.C. and Seattle.”

The top outbound states for 2018 were:

In several states, the number of residents moving inbound was approximately the same as the number moving outbound. Arkansas and Mississippi are among these “balanced states.”

Since 1977, United Van Lines has annually tracked migration patterns on a state-by-state basis. The 2018 study is based on household moves handled by United within the 48 contiguous states and Washington, D.C. and ranks states based off the inbound and outbound percentages of total moves in each state. United classifies states as “high inbound” if 55 percent or more of the moves are going into a state, “high outbound” if 55 percent or more moves were coming out of a state or “balanced” if the difference between inbound and outbound is negligible.

To view the entire 2018 study, an interactive map and archived press releases from United, visit the United Van Lines website.

If you’re due to be making a move sometime soon, it’s vital that you’ve found a reliable moving firm who can transport your possessions to your new property safely and efficiently. Are you moving in or around the Georgia area? Alpharetta residential movers, A.C. White Relocations could be the movers for you.

United Van Lines, which has tracked customers’ state-to-state migration patterns since 1977, says New York had the fourth highest rate of residents moving to other states in 2018. The Empire State previously ranked in the top three outbound states for eight years in a row, but improved slightly to No. 4 as New Jersey, Illinois and Connecticut saw higher rates of exodus this past year.