Transmission of the virus among children may have been low due to stay-at-home orders and school closures. But now schools are reopening.

How many of these sad pandemic achievements have you unlocked?

Analysis: This year could see the most joyless election campaign in generations

Maher says Biden's lead over Trump too slim: 'Hillary was ahead by more'

Graham on ex-FBI lawyer's guilty plea in Durham probe: I suspect he 'knows where the bodies are buried'

COOPERSTOWN – A full day of programming, including an introduction of the ephemera collection of Belva Lockwood, first woman to run for president of the United States, is planned Saturday to celebrate the 50th anniversary of the opening of Research Library building at The Fenimore &  Farmers’ Museums.

The daylong open house at the former NYSHA library will include a keynote by retired Library Director Wayne Wright of Oneonta (10 a.m.), 20-minute introductions to the photography collection (11 a.m.) and the geneology resources (1 p.m.), as well as presentations on volunteer opportunities (2 p.m.) and the role played by the CGP (3 p.m.)

END_OF_DOCUMENT_TOKEN_TO_BE_REPLACED

DOUBLE YOUR DONATION: SSPCA Benefactress To Match Gifts Up To Total Of $250,000

HARTWICK SEMINARY – When it comes to taking care of animals, Stacie Haynes never gives up.

“Stacie approached me multiple times about fundraising,” said Anita Vitullo, Staffworks president and Susquehanna SPCA benefactress. “She was tenacious! But I was happy to help.”

On Tuesday, April 30, Vitullo and Haynes announced a $250,000 gift to the $2 million “Shelter Us” campaign to build a new expanded shelter building on the lot across from Smith Ford on Route 28, south of Cooperstown.

But there’s a catch.

Donations can be made online, by mail or, ideally, in person. “We love when people stop in to bring a donation and tell their stories,” said Haynes. “And then when they come visit in our new building, they can see the difference their donation made.”

The new shelter will have a surgical suite, separate entrances for adoptions and surrenders, and rooms where potential families can meet and play with animals to find the best fit for their pet.

END_OF_DOCUMENT_TOKEN_TO_BE_REPLACED

SSPCA Benefactor Offers $250K, But We Must Match It

‘Shelter Us’ Target Within Reach 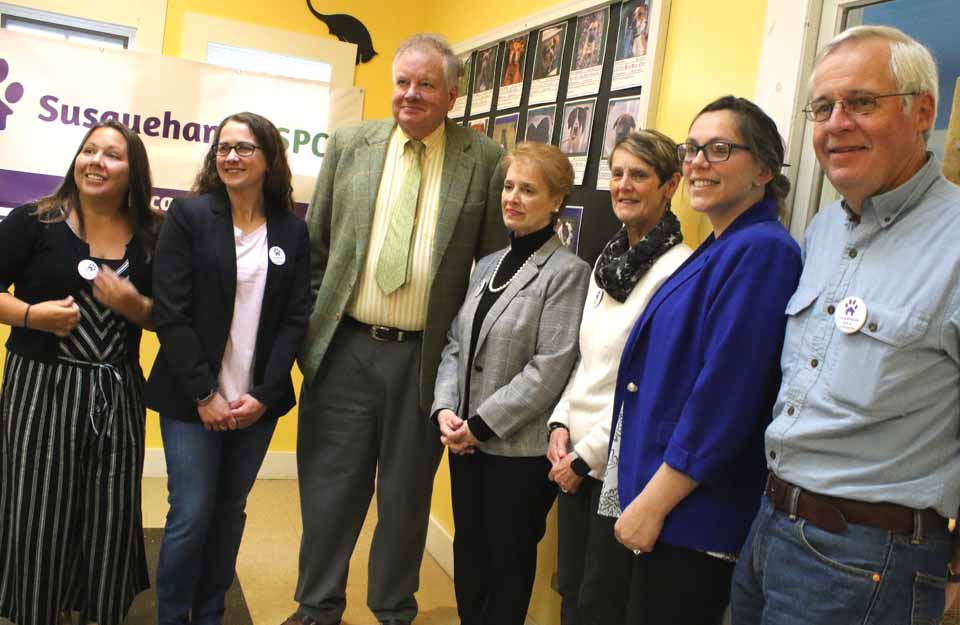 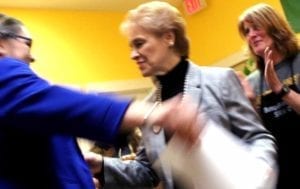 Susquehanna SPCA benefactor and Staffworks President Anita Vitullo, Clinton, above center, poses with SSPCA board members after announcing a few minutes ago that, dollar-for-dollar, she will match forthcoming donations to the “Shelter Us” fund drive up to $250,000.  If fully realized, Vitullo’s contribution will bring the $2 million drive to build a new animal shelter to $1.75 million, only $250,000 short of its $2 million.  Posing with her after the announcement at the current shelter in Hartwick Seminary are, from left, Jill Basile, Oneonta; Shannon Stockdale, Maryland; board Chairman Gaylord Dillingham, Springfield; Merilyn Gould, Morris; Executive Director Stacie Haynes, and Peter Gould, Morris.  Inset, after introducing Vitullo, Haynes hugs her as the benefactor prepares to make the announcement.  The new state-of-the-art shelter will be located on Route 28 next to St. Mary’s Cemetery.  More details in this week’s Freeman’s Journal & Hometown Oneonta, on newsstand tomorrow afternoon.  (Jim Kevlin/AllOTSEGO.com)

IN MEMORIAM: Kim Millisor, 82, Modeled High Fashion At The Otesaga

Modeled High Fashion At The Otesaga

Born in Albany on March 11, 1934, Kim moved to Columbus, Ohio and attended Ohio State University where she met her future husband, Jim Millisor. During their 62 years of marriage, they moved 27 times, ending up in St. Petersburg, Florida, where they raised their family.

END_OF_DOCUMENT_TOKEN_TO_BE_REPLACED

COOPERSTOWN – While New York State’s 2020 Democratic presidential primary was cancelled yesterday, Otsego County Republicans and Democrats will go to the polls 6 a.m.-9 p.m. Tuesday, June 23, where each party will settle one race.

END_OF_DOCUMENT_TOKEN_TO_BE_REPLACED 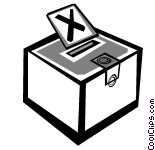 COOPERSTOWN – A funeral mass is planned for William Rohan Kraham, 94, a decorated bomber pilot during the D-Day invasion who then pursued a legal career specializing in aviation, at 10 a.m. Saturday, Oct. 27, at St. Mary’s “Our Lady of the Lake” Catholic Church.

Interment will follow in the Kraham family plot at St. Mary’s Cemetery, Index.

END_OF_DOCUMENT_TOKEN_TO_BE_REPLACED

She passed away on June 2, 2015, after a year-long battle with stomach cancer.

Carol was born on July 29, 1944 to Mary and H. Enrico Blazina in New York City’s most ethnically diverse neighborhood where friends and neighbors helped each other to get by, no matter what was needed. It formed her approach to a life that would forevermore revolve around helping others.

END_OF_DOCUMENT_TOKEN_TO_BE_REPLACED

Celebration Of Life Planned On Nov. 1

He leaves behind his wife, Patti, owner of Rose & Thistle B&B.

He was born Aug. 3, 1949, in Mountain Lakes, N.J.  He attended Paul Smiths College, but soon joined his family’s restaurants, where he worked most of his life.  They included Neil’s and Suds in New York’s financial district, and Neil’s New York, a dinner-theater and catering enterprise in Mountain Lakes.

The hospitality business was in his blood and he enjoyed it immensely, evidenced in his love of cooking.

END_OF_DOCUMENT_TOKEN_TO_BE_REPLACED

Mrs. Pollock passed away peacefully Tuesday, Nov. 3, 2015, at Bassett Hospital, surrounded by her family. A complete obituary will be forthcoming.

Vs. Biker Rally In Islamberg

ONEONTA – The Oneonta chapter, NAACP, is planning an Anti-Discrimination & Unity Session 2:30-4:30 p.m. Sunday, May 1, to counter a Bikers Rally planned in Islamberg, Delaware County, in mid-May.

“The whole community and surrounding areas are urged to attend,” said Lee Fisher, NAACP president, in an e-mail distributed today.

Fisher said the NAACP has been in touch with state police, the state Office of the Attorney General, clergy and Legal Redress of the NAACP New York State Conference to express concern.

ONEONTA – The family is inviting friends Charlotte Lunn Georgeson to a time of memory and celebration of her life 4-6 p.m. Saturday, Oct. 22, at the Oneonta Country Club.

A lifelong resident of Oneonta and widow of former Mayor Jim Georgeson, Charlotte died Sept. 12 at Focus Otsego in Cooperstown.

She was born July 13, 1927, the daughter of Dorothy Hanks and William H. Lunn, Sr. A 1944 graduate of OHS, Charlotte attended Connecticut College for Women in New London, and in 1949 earned a bachelor of science degree from Cornell University. After a brief career in hotel management in Washington, D.C, she returned to Oneonta, where she married her husband in 1951.

END_OF_DOCUMENT_TOKEN_TO_BE_REPLACED

COOPERSTOWN – Village Trustee Cindy Falk foresees a “pocket oasis in the downtown” when the work now underway in Pioneer Park is done.

Beginning last week, a trench is being dug to create a foundation for a bike rack and bike repair station, and a final plan for the whole park is now being prepared by landscape architect Michael Haas of Delta Engineering, Endwell.

But, as part of the $2 million federal grant to be implemented next year, the final park should include a space for gatherings and performances, a drinking fountain with bottle-filling station, a cobblestone surface and new plantings.