Mecca Out Of Danger

The River Street birthplace of detective Philo Vance may still be saved.

On Monday, June 10, Bob Brzozowski, Greater Oneonta Historical Society executive director, went through the 31 River St. home where William Huntington Wright – aka S.S. Van Dyne – wrote parts of his debut novel, “A Man of Promise.” Later, while recovering from a cocaine addiction, is believed to have written his first detective novel, “The Benson Murder Case,” a best-seller and the first of a dozen novels featuring dandy detective Philo Vance.

The house, owned by his maiden aunts Bertha and Julia Wright, was sold to the Salvation Army earlier this spring for $90,000. The original intent was to demolish it for a parking lot and, eventually, a new building for expanded programming, including the food pantry.

But when word of the home’s literary history got to Brzozowski, he began researching ways to save it. He arranged a tour with the Salvation Army, who took him around the grounds and through the house.
“Right away, we noticed that the entire house was dry, even though the weekend had been very rainy,” said Brzozowski. “Though obviously, there are other issues.”

At some point, the residence was chopped into apartments, but strangely. “There are two kitchens right beside each other,” said Brzozowski. “There’s one living space on the first floor and two on the second.”

Though no furniture was left, Brzozowski did find some “knick-knacks,” including a 1966 newspaper, a WWII-era canvas pouch in a tin box in the basement and a couple of “really interesting lamps.”
“There could have been stuff there that belonged to the Wright family, but it would be hard to detect,” he said.

But perhaps the biggest revelation of all is that the cupola, where legend had it that Wright did all of his writing, wasn’t big enough to accommodate the writer – or anyone.

“It’s maybe three feet from floor to ceiling,” he said. “It’s not like a room. He couldn’t even sit in here.”

There is, however, a garret on the second floor south side of the house. “I could imagine a writer working in there.”

END_OF_DOCUMENT_TOKEN_TO_BE_REPLACED

Hartwick Shows Off Centerpiece Of $67M In Campus Upgrades 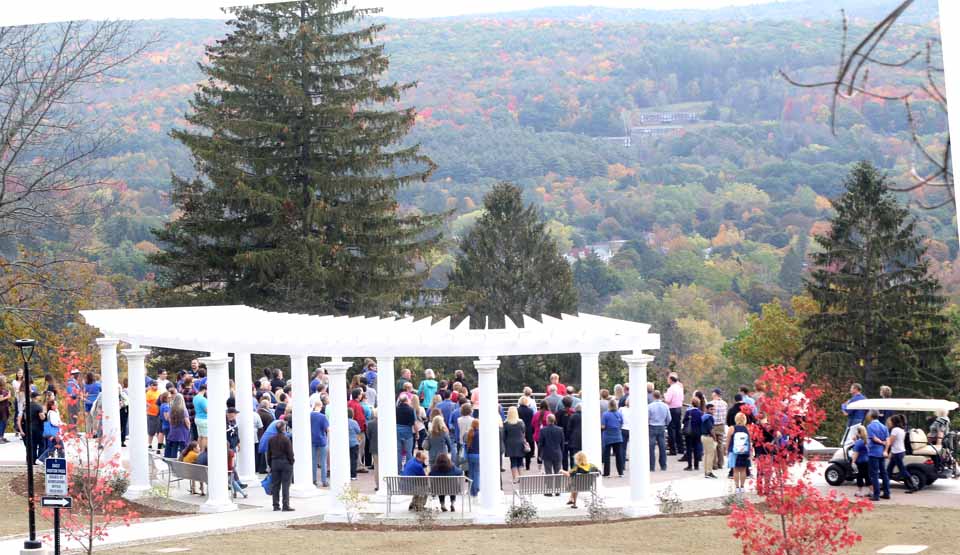 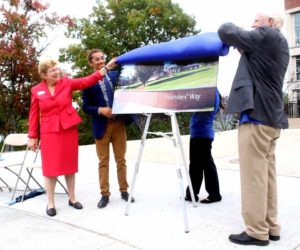 Hartwick College President Margaret Drugovich, in pink suit in top photo, and the tour she is leading, pause this morning at the campus’ new pergola on Founders’ Way, the brand-new pedestrian-friendly centerpiece of the Oneonta college’s $67 million in upgrades, renovations and new construction now coming to completion.  Drugovich led the inaugural tour of the walkway, which replaces Hartwick Drive, (formerly the main driveway into the campus), intended to maximize the college’s famous view of the northern Catskills, and adding space for students and others to pause, sit and enjoy the ambiance.  The tour occurred during “True Blue Weekend,” college’s homecoming, which coincides with a meeting of the board of trustees.  At right, Francis Landrey, trustees’ chair, right, Drugovich and student Joseph Zeigler ’99, who participated in the building committee, unveil a rendering of Founders’ Way at a ceremony at the tour’s completion.  (Jim Kevlin/AllOTSEGO.com)