Capitol rioter says she plans to lose 30 pounds, ‘work out a lot and do a lot of yoga and detox’ while in custody

A boat with ‘Let’s go Brandon’ Christmas lights won the holiday parade. Then the prize was revoked.

A CEO laid off 900 workers over Zoom. A Fox News host praised him: ‘I loved this, actually’

So Far, 27 Counties Decide To Opt Out 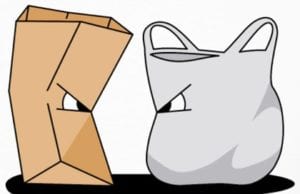 COOPERSTOWN – On March 1, 2020, “single-use” plastic bags will be banned from New York State supermarkets and other stores. That’s settled.

The question still remaining is whether the Otsego County Board of Representatives will charge a nickel for each paper bag used. That’s not settled.

According to a survey by the Democrat & Chronicle, 27 counties of the 63 have decided to opt out; 28 haven’t made up their minds. The rest have already adopted a nickel charge, and are trying to figure out how to bring their systems into line with the state requirements.

“The purpose of the 5-cent fee is to reduce paper bag use without banning it,” Digan said. “It’s been shown to work in places such as Chicago.”

“We learned in our meeting that making a paper bag actually takes much more energy than making a plastic bag even though plastic bags aren’t biodegradable,” said Kennedy.

If Otsego County were to pass a paper-bag fee law, it would receive 2 cents from every nickel, or 40 percent of revenues. The new law would require the county to use that money to buy reusable bags for low-income people.

And even if Otsego County opts in, shoppers who are on public assistance and receive Food Stamps would not have to pay the 5 cents.

Digan said he researched places that have applied plastic bag and paper bag usage fees and the outcomes of such laws. He and Sullivan presented his research to SWEC members, so they could use the information if they decide to bring a resolution on it to the board.

“We’re trying to get ahead of the curve before the law goes into effect,” said Digan. “If the county does decide to pass a law on the fee, we’re hoping it happens in the fall.”

He added, “There’s nothing scheduled for a vote on it. It’s up to one of the county board members to introduce legislation.”

“It’s a complicated issue without an ideal solution,” Kennedy said, “but when we make a decision, it will be an educated one.”

One thought on “With Paper Replacing Plastic, Does County Want 2¢ A Bag?”