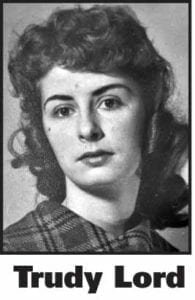 MILFORD – Gertrude “Trudy” Lord, 77, an accomplished ceramist who operated studios here and in Oneonta, passed away peacefully at The Centers Nursing Home on Sunday March 3, 2019, after a four-year courageous battle with Alzheimer’s Disease.
Trudy was born on Sept. 20, 1942, in Patterson, N.J., the daughter of the late Samuel L. and Gertrude Margroff Mott. In addition to her parents, she was predeceased by a sister Geraldine, and brothers Gary and Ronald.
She attended Milford Central School, and on May 12, 1962, she married Patrick Lord at St. Agnes Church in Paterson, N.J. In the ceramics field, she was a blue-ribbon winning doll maker, adept with her air-brushing techniques, and was a creative jewelry maker.
In her later years, she worked at the front desk at The Otesaga, then at Milford Central School until her retirement. She was also a past member of the Milford American Legion Auxiliary.
Trudy is survived by her husband of 57 years, Patrick; children Elizabeth (Kenneth) Miller, Patricia (Scott), Deanie (Justin), and David (Alexis); grandchildren Zachary, Eliana, Jasmine, and Isabella.
She is also survived by brothers Sam and Bill Mott, and many nieces and nephews.
A celebration of Trudy’s life was held. Monday, March 11, at the Cooperstown Centers’ chapel, 128 Phoenix Mills Road, Cooperstown, with Pastor Steve Fournier officiating.
Trudy’s family has asked that you consider honoring her memory by donation to the Alzheimer’s Association, www.alz.org.
Arrangements entrusted to the Delker & Terry Funeral Home.