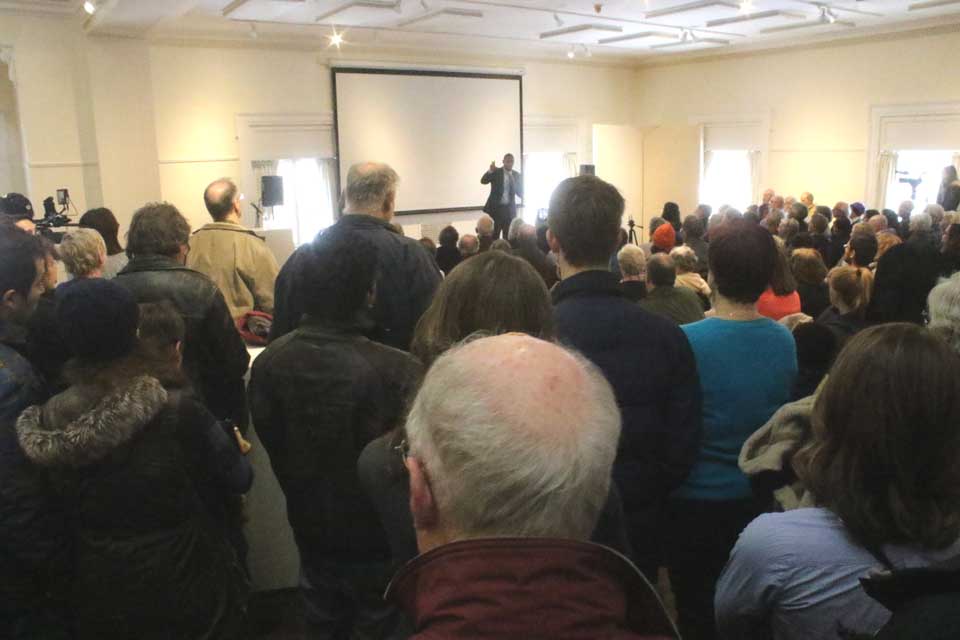 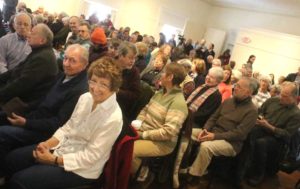 At this hour, freshman Congressman Antonio Delgado, D-19th, is speaking in Cooperstown’s Village Hall’s ballroom to packed house of perhaps as many as 400 people in his first “town meeting” in Otsego County since his Nov. 6 election.  In opening remarks, he expressed satisfaction that the 19th is one of the few “diverse” districts in the nation, split among Democrats, Republicans and independents.  Compared to districts that are more monolithic in their voters’ points of view, this requires him to seek compromise, which he said is his natural inclination anyhow.  The “Town Meeting” is scheduled to continue until at least 1:30.  Inset, Rita and Leo Tetenes, lower left, of Worcester, were among attendees from around the county, and there were even some Republicans, including county board Chair David Bliss, R-Cooperstown/Town of Middlefield, and newly elected Assemblyman John Salka, R-Brookfield, who said he received an invitation to the event.  The congressman will be in Oneonta 2-4 p.m. Wednesday to open his county office on the fifth floor of 189 Main.  (Jim Kevlin/AllOTSEGO.com)

CHECK BACK LATER THIS AFTERNOON

FOR FULL REPORT ON DELGADO VISIT