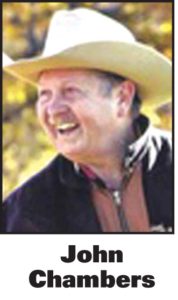 UNADILLA – John D. Chambers, 82, a horseman from birth and later an auctioneer at the family’s cattle and horse auction, D.R. Chambers & Sons, rising to president, died in Tucson, Ariz., on Feb 17, 2019.
He was born on Jan. 30, 1937. in Walton, the son of David R. and Mary (Little) Chambers.
John graduated from Unadilla Central School in 1955 and earned his degree from Albany Business College in 1957. Later that year, he traveled by train to Decatur, Ind., to attend Reppert Auction School.
He liked to tell how he graduated on a Friday and was auctioneering at the family’s business next day.
He married Charlyn Reinfurt in 1957.
His father, David R. Chambers, bought the Unadilla livestock auction in 1937, the year he was born.
His early years involved the breeding and training of trotters and pacers. He also became a skilled harness horse driver. In recent years, his sport of choice was team penning, which embodied both his horse and cattle skills. He embraced it with a passion, competing successfully not only on the East Coast, but also in the West when he wintered in Arizona.
During the months of September and October, he established a tradition of Sunday morning trail rides, from his farm to the Unadilla Rod and Gun Club for breakfast. This popular event has grown to have as many as 60 riders.
John was predeceased by his parents.
He is survived by his seven siblings, James Chambers, Madeline Grader, Shirley Osterhoudt, Dotty MacIntosh and husband, John, Dale Chambers and wife, Linda, Linda Allen and Michael Chambers and wife, Denise; plus many grandchildren; great-grandchildren; nieces and nephews.
His surviving children, Donna Hegarty and husband, Jim, Scott Chambers and wife, Kim, and Sandi Preston and husband, Kelvin, invite his family and friends to a Celebration of Life at the Unadilla Rod and Gun Club on Memorial Day, May 27. Everyone is asked to bring their favorite memory of John.
Further details will
follow.