70 Honor Ex-Slave Who Chose ‘Freedom’ As His Adopted Name

‘Freedom’ As  His Adopted Name 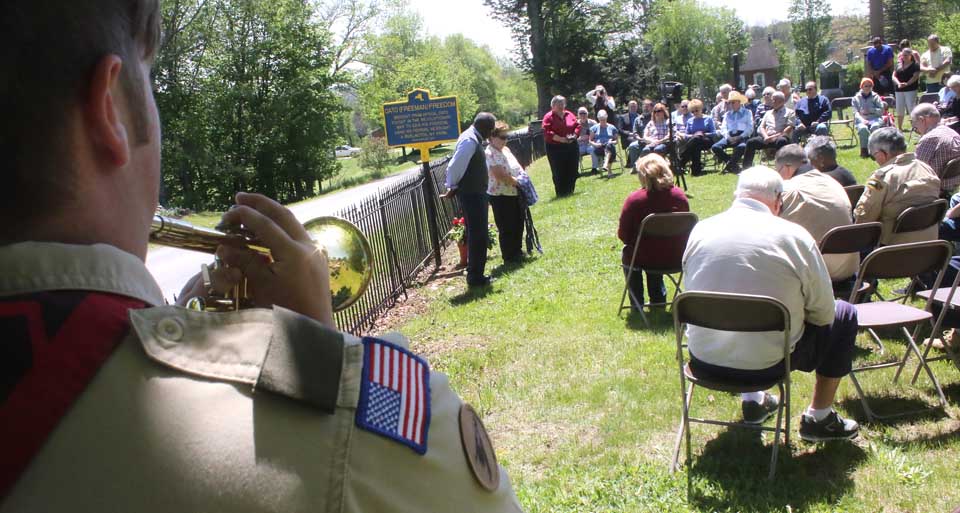 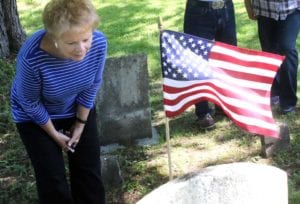 Boy Scout Tim Simmons, Troop 9, Edmeston, plays taps this afternoon after a historical marker was unveiled honoring Cato Freedom at the Butternut Valley Cemetery, Town of Burlington, where he is buried.  A former slave from Norwich, Conn., he won his freedom for fighting with Gen. Ebenezer Huntington’s Continental troops during the American Revolution.  More than 70 local historians and history enthusiasts gathered today as Lee Fisher of the NAACP, Oneonta chapter, recounted what is known about the man who moved to Otsego County in 1816 with wife and two teenage daughters, buying 33 acres of land for $333.33.  While Hartwick College’s U.S. Colored Troops Institute has identified three blacks who moved to Central New York after fighting the British, Cato Freedom’s is the only gravesite identified so far.  Fisher is standing next to new marker, as it OCHA President Deb Mackenzie (maroon blouse).At right, Deb Rood of West Burlington pauses at Freedom’s gravestone after the ceremony, organized by the Otsego County Historical Association, the NAACP and the USCTI.  (Jim Kevlin/AllOTSEGO.com)

HAPPENIN’ OTSEGO for SATURDAY, MAY 20

HAPPENIN’ OTSEGO for SATURDAY, MAY 20

END_OF_DOCUMENT_TOKEN_TO_BE_REPLACED

In today’s weekly report, “Morning Headlines,” on WAMC/Northeast Public Radio, Jim Kevlin, editor/publisher of www.AllOTSEGO.com (and Hometown Oneonta & the Freeman’s Journal), previewed this weekend’s plans to unveil a historical marker at Cato Freedom’s grave in the Town of Burlington.   A former slave, Cato Freedom ended his enslavement by enlisting in the Continental Army during the American Revolution.  He later settled north of Garrattsville.