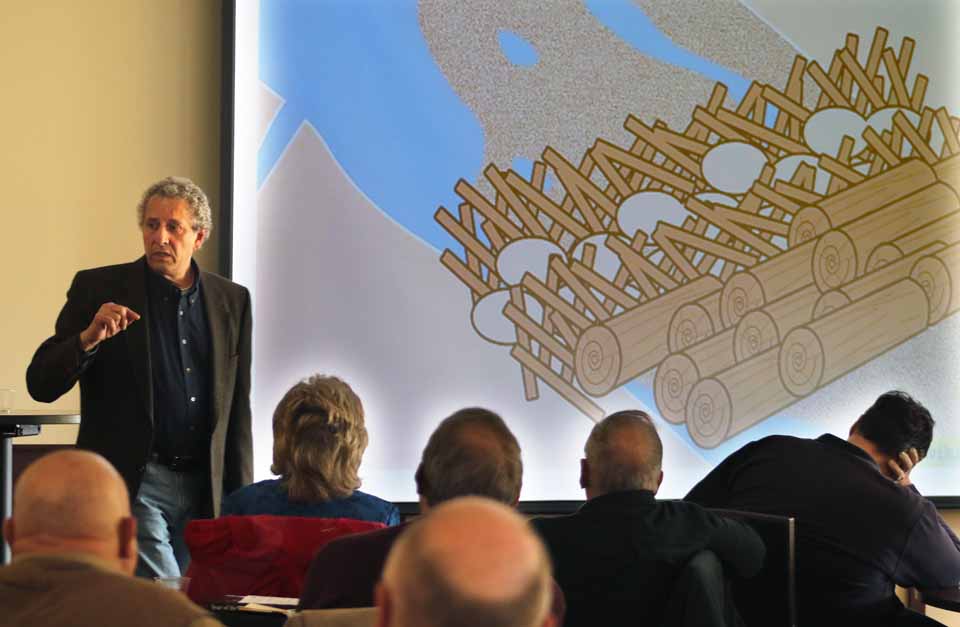 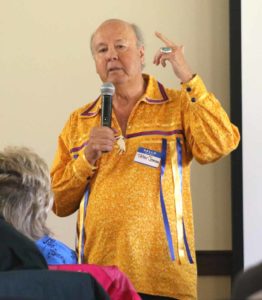 William A. Starna, above, SUNY Oneonta professor emeritus of anthropology, describes a schematic of what Clinton’s Dam might have looked like.  It was built across the Susquehanna River in Cooperstown, probably in the vicinity of today’s Main Street bridge,  during the summer of 1779 and breached on that Aug. 8; the resulting torrent floated 200 bateaux down the Susquehanna in Gen. James Clinton’s expedition against the Iroquois during the American Revolution. Starna, who was Hartwick College Distinguished Visiting Professor in 2014, described data that showed what probably happened to the river that year, and what didn’t. Inset at right, Peter Jemison, a Seneca and manager of the Ganondagan State Historic Site in Canandaigua, suggested George Washington was guilty of genocide in ordering the expedition against four of the Six Nation tribes, a conclusion that was much disputed at today’s Sulllivan-Clinton Symposium at Fulton-Montgomery Community College in Johnston, organized by the Fort Plain Museum and attended by 80 scholars and Revolutionary War history enthusiasts. (Jim Kevlin/AllOTSEGO.com)

IN THIS WEEK’S FREEMAN’S, HOMETOWN

END_OF_DOCUMENT_TOKEN_TO_BE_REPLACED

Ride The Rails For Tails