BURLINGTON – Calling hour are today for Velma B. Vibbard, 85, of Burlington, a retired dairy farmer and 4-H leader for six decades, who passed away Friday, Sept. 20, 2019, in Little Falls.

Visitation is noon-2 p.m. at the Delker & Terry Funeral Home, Edmeston, followed at 2 p.m. by a funeral service at the funeral home, with Pastor Barry Davis, Burlington Green Baptist Church, officiating. Interment will be in Burlington Green Cemetery.

Velma was born on June 13, 1934, in Cooperstown, the daughter of the late Emory and Wilma Curry Bloomer.

END_OF_DOCUMENT_TOKEN_TO_BE_REPLACED

BURLINGTON – It saddens us to announce the death of Dean Charles Bolton, a loyal, native Burlington Son, on the rainy morning of May 24, 2019.

All of us share a common desire to be remembered when we are gone, and hope that our lives somehow made the world a better place. Upon our demise, it is customary to write an obituary, a brief re-telling of who we were, where we came from, and what we contributed to society. It is also expected that some memory, personality trait or talent be mentioned in which to personalize the fact that we had among us a most extraordinary man who loved life and did everything he could possibly do to continue living it.

END_OF_DOCUMENT_TOKEN_TO_BE_REPLACED

Lifetime Resident Of Town Of Burlington

BURLINGTON – Rosemary Hall Mulvey, 81, who worked in the Burlington Green General Store before joining Edmeston Central and then county government, passed away Monday Nov. 26, 2018 in Clifton Park, where one of her daughters lives.

Rosemary was born on June 19, 1937, in the Town of Burlington, the daughter of the late Fred and Mary Adams. She married Edwin (Ted) Hall in June of 1956 in Burlington, where they lived and raised their family.

END_OF_DOCUMENT_TOKEN_TO_BE_REPLACED

He was born April 21, 1948, in Brooklyn, the eldest son of Edward and Geraldine (Dee) Storck. He was raised in Congers, Rockland County.

END_OF_DOCUMENT_TOKEN_TO_BE_REPLACED 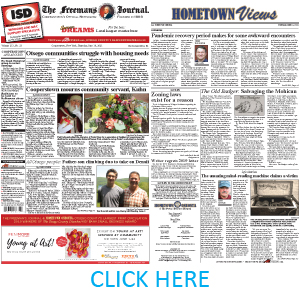