US coronavirus cases continue to surge, reaching nearly 1 out of every 100 Americans

Come to Liquor Depot for the variety of wines and liquors, stay for the pterodactyl.On expanding from their smaller store next door into the defunct Blockbuster Video in 2013, owner Dwight Pier realized the new high ceilings left a lot of vertical space that he believed needed filling.
So he bought a life-sized pterodactyl.
“The pterodactyl arrived in a big crate,” Dwight remembered, as the fifth anniversary of the mega store passed in February and Liquor Depot marks its 20th year on Southside in April, “and we had to put it together. It was heavy to lift it up in the air.”
His wife and co-owner Aileen didn’t question her husband’s décor choices. “I knew my husband,” she said.
These days, shoppers recognize the knight that stands sentry by the door, and a large rooster nearby. Batman, Spiderman and now Deadpool stand in action poses above the entrance.
“Laughing is a big part of life,” said Dwight.
It’s part of what has made Liquor Depot a Southside success for two decades now, and almost triple so for the past half-decade.

The Piers’ decision to more than double the store’s space in 2014 after Blockbuster Video went out of business next door reflected the couple’s shared entrepreneurial, risk-taking spirit and business goals. But Dwight said they did not make the decision lightly.
“It was scary as hell,” he admitted. “The bank had us do a guesstimate on profits, and we were going to barely survive.”
“But,” he added, “how can you have reward without risk?”
Today, 1,000 cases of wine and spirit arrive at Liquor Depot on shipping days, which occur three to four times a week. On any given day, customers have over 3,000 wines to choose from, sometimes over 6,000, depending on the season.
Inventory has tripled since 2014, and “we’re always trying new things,” Dwight added. “We do that for our customers.”
The wine industry is vast, and always changing. “Right now, it’s Rosés and Moscatos,” Dwight said. “These sweeter wines are entrance points for people’s palettes, I think. They start with those and tend to try other, drier wines later on.”
One of Liquor Depot’s most expensive and rare wines is an Appalachian DRC burgundy, “the best in the world,” the entrepreneur said. (“DRC” indicates a very small selection.) That burgundy and other rare, high-end (pricey) wines reside in a EuroCave wine cellar, a temperature-controlled cabinet.
Over 35 years, Dwight’s gained an in-depth knowledge of the industry, which he and Aileen pass on to their employees. He began working at dad Donald Pier’s store, Discount Liquor – still located at 53 S. Main St. – in the early 1980s.
In the late 1980s, Dwight met his wife Aileen, who moved from Hong Kong to Oneonta to attend SUNY, where she earned a degree in Business Economics in 1992. (Her Chinese name is Wing Wa Fong.) Aileen began working at Discount Liquor after graduating from SUNY and married Dwight.
Aileen and Dwight both wanted to be business partners as well as marital ones. In 1999, they saw their opportunity.
“Southside was starting to take off,” Dwight said. “When we saw a building become available in Southside, we went for it.”
Dwight credits Southside developer Gene Bettiol, who passed away in December 2017, with helping him and Aileen make Liquor Depot thrive. For instance, after the Piers purchased the space to expand into, Dwight wanted black ceilings with LED lights, which he had seen in other venues. As he had done in the past, Dwight consulted Bettiol on the idea. 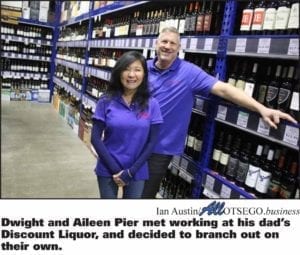 “Gene embraced it,” Dwight said. “He was very open to new ideas, even in his 80s. He said to both of us, ‘If you don’t succeed, I don’t succeed, so let me know if there’s anything I can do for you.’”
Another noticeable feature of Liquor Depot is how friendly and knowledgeable the staff is.
“We are a family business, so we treat everyone as family,” said Aileen. “We nurture our employees.”
“We have great managers, and all of our employees tend to stay a long time,” Dwight added. “Without them, we wouldn’t be able to run our business. I love hearing someone say, ‘It’s time to go already?’ after they’ve been here all day.”
Asked if the Piers have advice to give other would-be entrepreneurs on being successful, Dwight said, “Don’t hold back, be tenacious, and work very hard.” He cited a Japanese concept called “kaizen,” which means, “constant, never-ending improvement.”