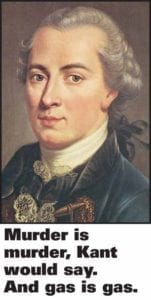 To the Editor:
Reading your newspaper has made me reflect on the meanings of words. I want to consider two terms: “compromise” and “the Golden Rule.”
We all learn the Golden Rule in school. Philosophers
have concocted their own versions of it. For example, German philosopher
Immanuel Kant’s Categorical Imperative says that if your moral rule stops making sense when everyone starts using it, then it is a stupid rule.
One might argue that a single person’s actions can’t matter much – if he steals or murders. And if we generalize this rule? What if everyone steals or murders?
Now consider the argument, frequently promoted in your newspaper, that Otsego County should be free to pursue whatever energy solution we like because we are small, and it won’t matter in the big picture, where a warming planet threatens human – and all other – life.
Nearly every community in Upstate New York, in every state in the Union, indeed, every hamlet in France and Brazil and India, is so small that, according to this argument, they should also be free to pursue whatever energy solution they like.
Everyone should burn as much coal or gas or garbage as they wish. Obviously, if everyone on earth followed your newspaper’s tenet, we’d be in even bigger trouble than we are.
Or does just little old Otsego County get to do whatever it likes, energy-wise, while everyone else should do what common sense and science demand: Pursue sustainable energy solutions?
A compromise is when two people, or two groups, with conflicting agendas, each give something up, to move to a path that lies in the middle. Often, we see compromise at work in Washington: a bill to monitor E. Coli in our food is watered down to satisfy the meatpacking industry, or a regulation to ban bee-killing pesticides is junked because the chemical industry threatens to pull support from legislators.
Right now, some are trying to pull off the same sort of compromise right here in Otsego County. Nearly everyone acknowledges the reality of climate change, though it is hard sometimes to accept our individual role in it, or to embrace personal actions to do our bit: drive less, buy local and in-season foods, turn down the thermostat.
In terms of energy, environmentally minded folk are saying we need to burn less gas tomorrow than we are burning today. A bipartisan coalition of Oneonta Mayor Gary Herzig and state Sen. James Seward has suggested a compromise: burn more gas.
Burning less gas, even continuing our current ruinous path by burning the same amount of gas, these might be considered compromises. Burning more gas is not a compromise.
It represents Leathers- tocking, the American Petroleum Institute, the Otsego County Chamber of Commerce and IDA imposing their solution – the one that gave us the overheated planet we have today – on the rest of us.