Barbara H. Manning, 81; Passes Away On Her Birthday 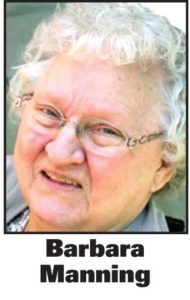 JORDANVILLE – Barbara Helen Manning passed away peacefully on Jan. 23, 2019, after a day of celebrating her 81st birthday with her loving family.
Barbara was born on Jan. 23, 1938, in Lebanon, Conn., to Arnold and Lilly (Krause) Bender. She was raised in Lebanon and graduated from Lyman Memorial High School, where she was chosen for the All State Choir.
On Aug. 31, 1958, she married Charles Albert Manning in Lebanon. They shared a loving and devoted marriage of 47 years until his passing on Oct. 12, 2005.
In 1978, Barbara and Charles began a new chapter in their lives, when they purchased Renegade Farm in Jordanville.
Barbara had a strong belief in God and led a devoted Lutheran Life. She was a member of the Trinity Evangelical Lutheran Church, Herkimer.
She was dedicated to her family, home and community. She was active in the Richfield Springs Community Center and served on its Board of Directors.
Surviving are her children, Jacqueline Hinckley of Richfield Springs; Jeffrey Manning and his wife, Cynthia, of Whitesboro; Gerald Manning and his wife, Amy of Jordanville; Gary Manning and his wife, Susan; Glenn Manning and his wife, Erlene, all of Herkimer; Joanne Belcourt and her husband, Richard of Cramerton, N.C., 11 grandchildren, 11 great-grandchildren; three sisters, Dorothy Stevens; Marion Russo and her husband, Roland; Linda Russo and her husband, Robert, all of Lebanon, along with many nieces, nephews, cousins, and in-laws.
Besides her parents and husband Charles, she was preceded in death by a sister Elizabeth Howard and a son-in-law John Hinckley.
A funeral was held Sunday, Jan. 27 at Trinity Evangelical Lutheran Church, Herkime. Burial was in the New Lebanon Cemetery, Lebanon, Conn.
Arrangements were entrusted to the Fenner Funeral Home.