Twins great gets preview of where his plaque will hang 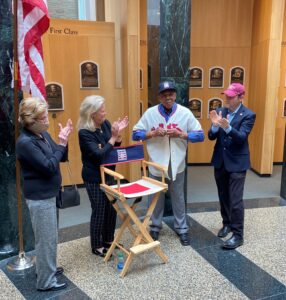 The National Baseball Hall of Fame and Museum rolled out its red-carpet welcome March 2 for Class of 2022 inductee Tony Oliva, the Minnesota Twins great elected to the shrine last December.

It wasn’t the first time the newly-minted Hall-of-Famer had been to Cooperstown or the museum; he’d been here before as an active Twins player when his team played the Hall of Fame Game and returned to support his teammates Harmon Killebrew and Rod Carew as they were inducted. As he turned the corner, though, to enter the museum’s Plaque Gallery and see where his plaque will be mounted, it was easy to see this was an entirely different walk through the building. 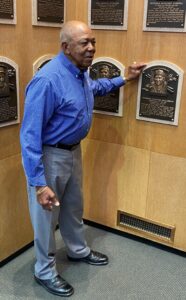 He stopped first at plaques for Al Kaline (“What a swing that man had!”) and Harmon Killebrew (“He was too nice to be a baseball player, a special man.”) before meeting Hall of Fame Chair Jane Forbes Clark and President Josh Rawitch to don his new “Hall of Fame” jersey and cap. He drew his signature across the place on the wall awaiting his plaque later this year, then spoke eloquently of his thoughts as he prepares to join the greats enshrined in Cooperstown.

“I’ve been waiting for this for 45 years,” Mr. Oliva said, having fallen short of requisite votes for the Hall in several previous years. “It’s never too late. It was great to hear the news for me, so many fans, friends, and teammates who gave me hope that I’d get in the Hall.”

“When I got the phone call from Jane (Forbes Clark), it was still a surprise. I didn’t know what to do!” he laughed. “My wife hugged me and gave me a kiss. There was lots of laughing. Lots of crying.”

Perhaps foreshadowing his remarks when he is inducted in July, Mr. Oliva spoke of his affection for the city of Minnesota and the Twins, his teammates, his opponents, and his family – his wife of more than 50 years, Gordette, and his daughter, Anita, accompanied him to Cooperstown for the March 2 ceremony – and his pride in entering the Hall this year with fellow Cuban, Minnie Minoso.

“This is all a miracle for me,” he said.

As for his long wait for Hall induction, “I love this game, but there’s a lot of luck in it,” he said. “I think about someone I faced many times, Luis Tiant. One of the three or four best pitchers in the American League for a lot of years, but he’s not in the Hall of Fame. You have to be lucky to be in the Hall of Fame. I know that. This is a great opportunity and a great honor.”