‘It’s The Knuckle On Your
Middle Finger That Does It’

About 15 years ago, after having read several of his books, I heard that Jim Harrison, the writer and poet, was giving a reading and a talk at Barnes & Noble on Union Square in Manhattan.

Several months before at a barbeque on Canadarago Lake outside of Richfield Springs, I had talked at length about Harrison’s “Legends of the Fall,” and several of his other works, with friend and artist Brendon Pulver who, like me, was an enthusiastic fan of the esteemed writer.

When I arrived at the lecture hall, to be sure I was in the right room, I asked a man who appeared to be surveying the seating arrangement, “Is this the Harrison reading?”

To my surprise, it was Brendan Pulver who had come, I thought, all the way from Richfield Springs. We found seats towards the front of an audience of about a hundred.

Soon, a broad-faced Harrison in his gravelly voice with a blind eye half closed was reading a passage from his latest book. He also read some poetry and talked about life, fishing and hunting in his beloved Michigan’s Upper Peninsula.

His thick frame seemed to be planted heavily on his feet as he held onto the podium. The everyday clothes he was wearing looked comfortable and worn right down to a weathered leather vest.

He appeared to be older than his years and I doubted he was still capable of partaking in a rigorous deer hunt. There was even some mention of gout which kept him from walking far. That reminded me of a character in one of his books who used to crawl cross-country at night.

In what seemed like a short time the program ended and, after some book signings, people slowly filtered out of the room. Soon it was just Harrison, Pulver and me – and a bottle of wine that was sitting on a nearby table.

“What are you guys hanging round for?” Harrison asked good-naturedly.

“Waiting for you to open that bottle of wine,” Pulver returned.

“I would, but I don’t have a cork screw!” said the writer.

“We can push the cork all the way in,” I offered.
“I’ve done that before,” Harrison mused. He didn’t seem in any hurry to leave. I got the impression that in spite of his fame and success, in New York City there wasn’t any particular place he wanted to go.

Soon we were discussing different ways of opening containers that held alcoholic beverages. The pen Harrison was pressing into the cork wasn’t making much headway. He finally dismissed
the effort saying, “We don’t even have glasses.”

“I’ve opened beer bottles with a folding ruler,” I offered. “You just squeeze it against the bottle in one hand and hit the ruler at the bottom with the other hand.”

“I know a trick where it appears that you knock the top off of a flip-top beer bottle with your index finger,” Harrison offered. “But it’s really the knuckle on your middle finger that does it.”

“Learned that as a soldier in Germany,” I said. “We’d always pull it on the new guys.”

“Haven’t seen one of those bottles in a long time,” the writer mused.

“I guess the knuckle’s like the writing between the lines,” I said.

“That’s what gets the job done,” the writer returned.

Then, Pulver mentioned a Harrison detail about lightning never hitting a beech tree and said that Hemingway made a similar claim.

“I didn’t steal that idea,” Harrison said, seemingly eager to distance himself from the other macho writer.

“I told that tree story to a hunting buddy,” I said. “And for several deer seasons he looked for a beech that had been hit by lightening, but he came up short.”

“Good tree to hang onto in a storm,” the writer advised.

I was tempted to suggest that we go out for a drink – to nearby Molly Malone’s, a place that made great Irish coffee. But Pulver said that he had to teach a class in the morning. To my surprise, he had recently secured a teaching job in a school uptown.

Now, I would be left alone to carry on a conversation with a world-class writer. We couldn’t talk about beer bottles forever. And so – I can kick myself now – but regretfully I failed to invite the man out for a drink. We parted with the corked wine bottle still sitting on the table.

On the subway ride back to Brooklyn I remembered that I still had a couple of those German flip-top beer bottles that I had packed in my hold baggage for the return flight to the States. “Wouldn’t it be nice,” I thought, “if I sent Jim Harrison one. Maybe he could pull the prank on the now old lady who took out his eye when he was a kid – with a bottle!” 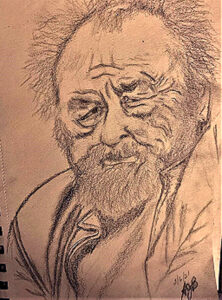 We later exchanged letters about fishing, hunting and more. I often thought about that night at Barnes & Noble and wondered if he was finally able to get the wine bottle open. Hopefully he didn’t finish it alone in a hotel room.

2 thoughts on “BERKSON: ‘It’s The Knuckle On Your Middle Finger That Does It’”