In a Troubled U.S.-China Relationship, Moments of Pragmatism Emerge

Letting go of the past
is a challenge at any age

My son Jonathan called me the other night to tell me he missed the old house in Brooklyn. He had lived there his whole life, as I did mine, except for the Army and my longest winter in Richfield Springs.

I told him I missed the house, too, and described my last days there. We had sold to a builder, so I knew the old Victorian was going to be demolished. In the meantime, we rented a one-room studio apartment only a block from the school where my wife Alice was finishing up her last year as a teacher. Both our kids were away working or at school. All of the furniture had been moved into the studio or up to the recently purchased farm, but I was still holding out at the house, sleeping on a mattress on the floor and using cardboard boxes to replace tables and such. Alice stayed at the apartment, but old Rufus, our yellow lab, was an outside dog all his life and I didn’t think he’d do well in the confines of our temporary digs, so I stayed at the house for as long as I could. It was late December, a few days before the closing date, when I had the gas, electric and telephone turned off. The main water valve, I could close myself. 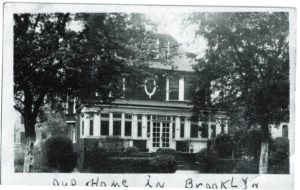 “Dad,” my son continued. “Do you remember when we’d get home from being away in Richfield all summer? I had this ritual of checking out all the security measures you had made before we left, the bar across the front door, the timers, the note to a potential crook on our most vulnerable window, Make My Day!”

“I was always relieved to find that no one had violated our space.”

“Dad, this morning I woke up thinking about that and it made me very sad to think that the house was dead, all the living that we did there was gone.”

“It’s not gone, Jonathan. We’ll always carry the memories with us. I can see every nook and cranny in the house. I can walk through each room. It’s all in my mind,” I said.

“Me, too. But, when you were telling me about your last days there and you were cutting off the gas and electric, the house that we had so many Christmases in was dying. It was being taken off life support.”

“That’s very perceptive. I never thought of it that way.” I said.

“Now it’s gone and I just feel like I’m floating, not connected.”

I said. We’ll make new memories here. We already have. Your sister’s wedding! Everyone who came to the farm. It was like they used to come to the house in Brooklyn.”

“That’s only one memory.”

“There will be more.”

I told my son some last details of my stay at the house before the closing. Luckily the weather was relatively mild for December. The morning of the sale, I crushed my cardboard furniture and carried the mattress out to the front of the house where I leaned it up against the hedges that we planted to hide the trash cans. Then I locked the back door, looked around the yard for the last time and loaded Rufus into the station wagon.

The buyer wasn’t at the realty office when I arrived. An hour later he called to say there was some kind of a problem and the closing would have to be postponed. I looked out the realtor’s window.

Dark clouds were threatening rain. I thought of the mattress out by the hedges and headed back to the house as fast as I could. It was drizzling as I dragged it up the front steps. Now, Rufus would remain in his own backyard until the buyer got his ducks lined up.

“It wasn’t just for Rufus, Dad.” You stayed there at the end to say good-bye to your father’s father’s house.”

“Yes, of course, but still, I knew it was time to move on. The neighborhood had changed. Almost everyone we knew was gone. It was like we were living in a different place without having moved.”

“But it was still home,” my son said.

Alice and I recently drove to Brooklyn and among other things visited the sight of our old home.

Five floors of condos now stand there. The realtor was having an open house, so we ventured inside and stood where our living room used to be.

I didn’t feel a connection. It was no longer the same place as the living room in my mind.

They say it takes five years to feel rooted after you relocate. (Speaking of rooted, last fall we buried Rufus in a hedgerow on the farm, a memory). To make the adjustment a little easier I had taken the mantelpiece from the old house, some brass door-plates, stained glass windows and coincidentally a leaded glass window from Jonathan’s room.

Progress has been slow, but one day he will be coming up the road and he’ll see the old window from his room mounted on the south side of the “new” house and maybe I’ll just happen to be looking out at the time — to see my son coming home.