The other day I finished weeding the garden and walked out to the chicken coop to water and feed my birds and collect their eggs. Disappointment hit me when I opened the door and found a dead chicken sprawled out on the floor with a leg half chewed off.

I had left the chute leading to the yard open overnight as I had been doing for the last several days. Obviously, some critter had taken advantage of my carelessness. It’s been about three years since a weasel had decapitated one of my hens and made off with the head. I say weasel, not because I saw it, but because the crime fits that animal’s M.O.

Anyway, I drew a chalk line around the murdered chicken, picked it up with a shovel and headed for one of several vacant woodchuck holes in the hedgerow in back of the barn. The holes are unoccupied due to the efforts of my neighbor’s son who picked off seven unwelcome diggers last year. I was thinking of how to mount an investigation to find the animal that had committed henicide.

Back in the coop, I lifted the outside door to the laying box and was about to reach in when I noticed that there was something in there, apparently sitting on the eggs, a chicken, I thought. I bent to look inside and came face to face with a raccoon. He had a matter of fact expression on his face as if he were asking, “What, I can’t hang out for a while?”

The first thing I thought was, ‘Coon in the daytime, maybe he’s rabid.’ It was a good thing I hadn’t reached in without looking. I let the door slide closed and went outside to shut the hatch leading to the yard. All the chickens were outside, so, the coon was alone and locked in the coop. I was due to attend a birthday party on the other side of Canadarago Lake in less than an hour. There wasn’t much I could do in that short amount of time other than blowing out the side of the coop with a shotgun, so I went back to the house to wash and change my clothes.

When I returned home late in the afternoon I had a plan. I caught all the chickens and put them in the barn. Then I carefully replaced the wooden laying box door with a piece of plexiglass so that I could look inside the coop at the intruder. I observed that his eyes were clear and he wasn’t foaming at the mouth. My wife Alice had gone south for the weekend and had taken her camera so I called my neighbor, John Purcell, to come over and take a mug shot of the culprit. 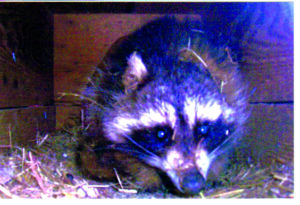 Minutes later John was tooling up the driveway. He thought that the coon was cute. He said it looked like a pet he once had. I asked him if he wanted to take the animal over to his place but he declined. I reminded him that this coon was a killer, that if he weren’t stopped, he’d be back for another chicken. “He might even turn into a serial killer,” I warned.

“His presence is proof enough for me,” I returned.

Frustrated, John hesitatingly agreed to flush the animal out of the laying box with a stick while I waited outside the coop with a shotgun. “Be careful where you aim,” my neighbor said sticking his head out the coop door.

A minute later the killer lay face down in the dirt. I could hear my chickens cheering in the barn. John wanted to do an autopsy to see if part of the dead chicken’s leg was in the coon’s stomach but I warned him about rabies. I then picked up the carcass with a shovel and carried it to one of the vacant woodchuck holes — thanks to my neighbor’s son. To my surprise a woodchuck whistled at me from what I thought was a vacant hole. “You see,” John said. “You can never be sure about anything.”

“This coon, like all those woodchucks, ain’t gonna cast no shadow on Groundhog Day.”