Devin McCourty pays tribute to James White after his father dies in car crash: 'We love you, bro'

How Jennifer Aniston, Rachel Brosnahan and more stars prepped for the 2020 Emmys 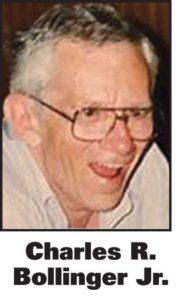 ONEONTA – Charles R. Bollinger Jr., 81, a Navy veteran, Postal Service retiree and crossing guard at the former Center Street School, passed away peacefully in his home on Jan. 24, 2019.
Charlie was born in Flushing, on July 20, 1937.
His family and friends knew him endearingly as Chuck, Russ, or Poppy.
Charlie served in the Navy aboard the USS Wren DD-568 from 1955 to 1958 and often spoke fondly of the memories he made during that time.
Following his time in the Navy, Charlie worked for the Postal Service for more than 37 years before retiring in 1992.
Charlie enjoyed being an active member of the Oneonta community and worked in several community positions after his retirement, including SUNY Oneonta’s Office of Ancillary Services, as an election inspector with the county Board of Elections and as a city bingo inspector.
Many people in the Oneonta community knew Charlie as the beloved crossing guard for families and students at Center Street School, a position he thoroughly enjoyed and held dear to his heart and for handing out Smarties at his grandchildren’s sporting events.
Charlie will be missed greatly by his wife, Carol. Carol and Charlie would have celebrated 55 years of marriage on Feb. 8.
He will also be missed by his daughter, Susan Kurkowski and her husband, Kevin of Oneonta; his son, John Bollinger and his wife, Lia of Williamsburg, Va.; his treasured grandchildren, Kaitlyn O’Connor of Richmond, Va., Kyle and Kevers Kurkowski of Oneonta and Caroline and Abigail Bollinger of Williamsburg, Va.; his sister, Midge Finck and her husband, Eddie of Levittown; his sister-in-law, Susan Cannizzaro and her husband, Joe of Voorhees Township, N.J.; several nieces, nephews and friends.
Calling hours are 5-7 p.m.,
Thursday, Jan. 31, at the Lester R. Grummons
Funeral Home, 14 Grand St., in Oneonta. A mass will be at 10 a.m., Friday, Feb. 1, at St. Mary’s Church in Oneonta.
In lieu of flowers, the family requests those who wish to honor Charlie make donations to Catskill Area Hospice and Palliative Care, 297 River Street Service Road, Oneonta, NY 13820, or the Oneonta Fire Department Rescue Fund, 79 Main St., Oneonta, NY, 13820, in memory of Charles R. Bollinger Jr.
Arrangements are with the Lester R. Grummons Funeral Home.