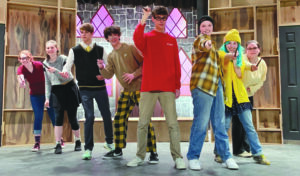 Cooperstown Central School presents the junior/senior play “Puffs” this weekend – a ‘clever and inventive play that never goes more than a minute without a laugh,’ says Nerdist. The show presents “a new look at a familiar adventure from the perspective of three potential heroes just trying to make it through a magic school that proves to be very dangerous for children.” Alongside them are the Puffs, a group of well-meaning, loyal outsiders with a thing for badgers who, says Hollywood Life, “are so lovable and relatable, you’ll leave the theater wishing they were in the stories all along.” From left to right, the cast includes Crystal Castle, Lilly Grady, Oliver Wasson, Simon Hurysz, Max Jones, Maddy Hayes, Annie Walker, and Quinn Lytel. Tickets are $5 at the door, with performances March 18 and 19 at 7 p.m. and March 20 at 2 p.m. at the Sterling Auditorium. For mature audiences (rated PG-13).