US coronavirus cases continue to surge, reaching nearly 1 out of every 100 Americans 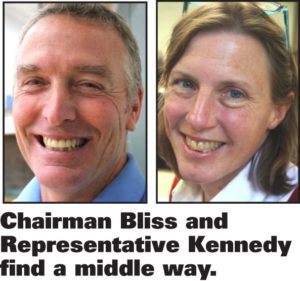 Regarding the county Board of Representatives’ policy, “Use of Photographic and Recording Devices At County Meetings,” the stated goal – “to allow meetings to be conducted in an orderly manner” – was never objectionable.
Two aspects of the policy were: One, that reporters need to “sign in” (i.e., register with a local government to do their job) and, two, if failing to do so would be “excluded” from board or committee meetings at a chairman’s fiat, with no due process.
This was not simply a press concern, but a public one. As originally drafted, members of the public could have been prevented using iPhones to record aspects of meetings unless they previously registered, and could likewise be
excluded on a whim.
These concerns were affirmed in an opinion from Bob Freeman, executive director of the state Committee on Open Government, an arm of the New York Department of State.
•
Happily, when the county board’s Administration Committee met Friday, Feb. 22, it adjusted the policy to accommodate the need for orderly meetings and the press and public’s right to report on and/or monitor proceedings of an elected body.
Under the adjusted policy, strictures on iPhones and traditional 35mm cameras were removed. Instead of “signing in,” news outlets may “reserve” one of three spaces set aside for larger camera equipment needed to videotape proceedings; if, in the unlikely instance four camera crews show up, the one without a reservation (or the fourth) would be out of luck.
A subsidiary issue was also resolved, according to board Chair David Bliss, R-Cooperstown/Town of Middlefield: Whether press photographers could take photos at the front of the room when county reps are sworn in every other year. (Until 2018, this had never been an issue, but security concerns have heightened.)
In 2020, Bliss says, county reps, who in the past have taken their oaths with their backs to the public, will now face the gallery, in view of the public and accessible to press photographers. Issue resolved.
These seem like commonsense ways to bring legitimate interests into accord – the county board’s, to proceed in an orderly fashion; the press’s, to maintain its independence in covering news; and the public’s, to witness and record public proceedings. In short, everybody wins.
Credit is due to two eminently sensible people: Bliss and Administration Committee chair Meg Kennedy, C-Mount Vision, and county board members who worked their way through the issue at the “Admin” meeting.
This ability to address rancor and find common ground is new, and promising for all, including the electorate.