DiPerna, Back At Vatican:

World Working Together On 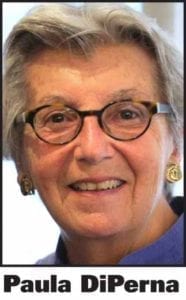 COOPERSTOWN – Back in Vatican City, Cooperstown’s Paula DiPerna looked around the Sala Regia Friday, March 8. There was a turbaned Sikh. There was Muslim. There was a shaman from the far reaches of Greenland.
“All these different societies have a need to protect nature,” said DiPerna, special adviser, CDP North America, a non-profit that helps companies, cities and nations manage their environmental impacts. “There’s ice melting in Greenland, deforestation in Ghana – all have seen and are living the problems of Climate Change.”
For the second time in less than a year, DiPerna was in Rome, among 200 delegates at a follow-up conference to last year’s “Saving Our Common Home and the Future of Life on Earth,” itself a three-year follow-up to the 2015 Paris Climate Agreement.
She was interviewed by phone Saturday the 9th, standing in the sunshine at the center of St. Peter’s Square, surrounded by thousands of pilgrims and tourists from around the world.
“It is truly powerful to receive all of the history, good and bad, and to see people are still feeling the power of being here,” said DiPerna.
The day before, she was at “The International Conference on Religions and Sustainable Development Goals,” which was setting the stage for the United Nations’ “Climate Summit 2019: A Race We Can Win,” Sept. 23 at U.N. headquarters in New York City.
To get to the Sala Regia, the room where Pope Francis convened Cardinals from around the world Feb. 21 to address child abuse by priests, DiPerna had to traverse the famous Bernini staircase, carved by one of the foremost sculptors of all time.
Pope Francis addressed the delegates, although this time he did not meet personally with each of them. “When we speak of development,” he said, “we must always ask: Development of what and development for whom.”
Said Cardinal Peter Turkson, a Ghanain and prefect of the Dicastry for the Promotion of Integral Human Development, a member of the Pope’s cabinet, advised delegates: “Ethics is a system of defense built around what you consider to be precious.”
On that basis, he called for “reinstating ethics into daily decision making,” DiPerna reported.
Representatives of all the world’s religions were invited because “the whole message is diversity,” said DiPerna. “Only diversity gives you excellence of thought. Only diversity is fair.”
The question before the conference was “how to take all this diverse wisdom and turn it into some action that guides the nature of economic progress.”
The discussions will now be distilled for presentation at September’s U.N. conference, which will come up with action steps. The first “report card” on progress of the undertaking will be issued in 2020.
Since the Trump Admin-istration announced in 2017 that the U.S. was withdrawing from the Paris agreement in 2017, DiPerna was one of three U.S. delegates. “The flouting of international consensus is losing us respect, not just of governments, but of individuals,” she said.
Still, she added, “it surprised me how much people look up the United States … People don’t understand what happened in the U.S. Why the administration is pulling us out of all these global agreements, why we don’t want to be part of solutions anymore. It’s scary. It leaves a big vacuum.”
“For me personally,” DiPerna continued, “I’m continuing to do what I’m doing: Trying to connect all these dots: sustainable investment, synthesizing trends in local and international governments. I’m about what’s being done, trying to bring it down to Earth.”
While operating in the secular world, the long-ago little girl in The Bronx, where she received her First Communion at Our Lady of Assumption Church, mused, “It’s interesting to see all the symbols of my youth actually in operation, all the things I only heard about as a child.”