Letter to Editor by DAVID RUSSELL 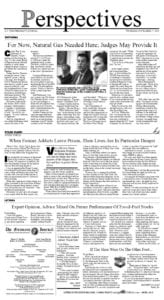 I read with interest Cooperstown Village Trustee Lou Allstadt’s response to my article regarding the Cooperstown Village Board’s decision to divest fossil-fuel stocks in the firefighters’ and emergency workers’ defined benefit plan. I thought some of his points merited a response from me.

It was refreshing to see Mr. Allstadt lay out a fiduciary argument for the board’s decision (notwithstanding it was selective and omitted material elements of a fiduciary analysis), although I am still a little confused regarding his implication that the SPYX ETF, which is 11 months old, has a 5-year track record.

However, it is fairly obvious that this was an “after the fact” fiduciary analysis prepared by Mr. Allstadt after my article was published and was not prepared before the board acted. Obviously, if there is a written legal analysis and objective Investment Memorandum that the board reviewed before it acted, I am sure the public would be interested to see it.

Mr. Allstadt also correctly notes that this divestment relates to a relatively small portion of the retirement fund. However, social divestment is a slippery slope and, without strict fiduciary guidelines in place, the personal causes of other board members could find there way into investment decisions – i.e, possibly a board member wants to divest from the defense and munitions industry, another gambling and casinos, another alcohol, etc. Do we really want that?

Mr. Allstadt also seemed to oddly interpret my statements supporting diversification in the retirement fund portfolio, as well board members avoiding acting as stock pickers and trying to predict the stock market in the future, as me stating I see fossil fuels as a “safe investment.” Obviously, they aren’t the best stocks to buy but they have always been relatively stable in the market. Mr Allstadt was using me as a “straw man” to launch into a professorial lecture supporting fossil-fuel divestment. However, once again he only cited sources supportive of his cause. If he was being intellectually honest and objective, he would cite the many credible sources on the other side of his argument and then rationally refute them.

For instance, he cites in detail an article by former state First Deputy Comptroller Tom Sanzillo (more to come on him later) citing dire predictions for ExxonMobil.

It was also somewhat humorous to see Mr. Allstadt put me in his “employee” category during my tenure in a previous administration in the state Comptroller’s office, and cite the fossil-fuel expertise of his fellow senior executive Tom Sanzillo, first deputy comptroller for Comptroller Alan Hevesi, who was responsible for management of the state Common Retirement Fund.

It is interesting, however, to note that when Mr. Sanzillo was in the actual position of a fiduciary (and not at a not-for-profit “think tank”) where he could have acted on fossil-fuel divestment, he never proposed or sought to do so (nor has the Common Retirement Fund or any other major public pension fund since). So using Mr Allstadt’s terminology, when he could have “sucked it up” and acted, Mr. Sanzillo consciously decided not to.

Finally, Mr. Allstadt cited as “inappropriate” my statement that his financial adviser might have recommended that Mr. Allstadt divest his ExxonMobil holdings before capital gains tax rates rose in 2013. Mr. Allstadt, as a public figure and in a public forum, voluntarily disclosed his personal financial information and transactions, apparently to demonstrate his conviction around fossil-fuel divestment.

If Mr. Allstadt is sensitive and does not want to receive reasonable follow up questions regarding his publicly disclosed personal information, I would recommend he keep it strictly private in the future.

Thankfully, I am not a village employee who could be “written up” for “inappropriately” questioning a village trustee.