Ingraham: Left's revolution of 'systematic radicalism' can only be accomplished by changing how we teach kids

This Day in History: May 7

Letter to Editor by LOU ALLSTADT

I am again compelled to respond to Mr. Russell. 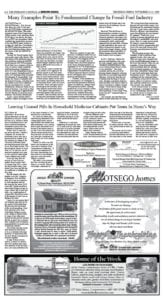 First, to remove any confusion, accompanying this letter is a graph published by S&P Dow Jones, which I made available to this newspaper two weeks ago. (To see chart, click image at left). The lower line is the original S&P500 index. The upper line shows the newer S&P500 index excluding fossil fuels, back tested to the beginning of 2012.

These are indexes of groups of stocks. They are not exchange-traded funds (ETFs) that investors can actually buy using a personal finance company like SoFi. ETFs based on both the full S&P500 and the S&P500 excluding fossil fuels are available for purchase and are designed to track the underlying index very closely.

So, if an ETF for the S&P500 excluding fossil fuels had been available earlier, it would have followed close to the upper line on the graph, while ETFs tracking the full S&P500 tracked close to the lower line.

There is a similar index, the Fossil Free Index (Symbol FFIUS), which goes back further in time and excludes a similar but slightly different mix of fossil-fuel companies from full S&P500 index. Over the past one, three, five, and 10-year periods, the FFIUS Index outperformed the full S&P500 Index. This index prompted some of the Cooperstown village trustees’ early questions about fossil fuels to our adviser, but there was no ETF-type investment vehicle available that would allow investors to buy the FFIUS index without incurring very high fees. Nevertheless, the FFIUS index does demonstrate that fossil fuels have been a drag on the returns of the full S&P500 for some time.

Second, Mr. Russell implies that I concocted a report after the fact. The description of the deliberative process that resulted in selling the S&P500 and buying the S&P 500 excluding fossil fuels was a summary of discussions at various village committee and board meetings beginning in early 2015 and culminating in discussions at August, September and October 2016 meetings of the Economic Development & Sustainability Committee, the Finance Committee and the Board of Trustees. All of the trustees and the mayor have confirmed that my description was accurate. Furthermore, during my tenure on the board of trustees, I can recall no other decision amounting to approximately $10,000 that has received this much attention. The trustees did their job.

Lastly, I agree with the editor’s headline. Experts do disagree on the future performance of fossil fuels. There are essentially two camps. One says the fossil-fuel industry is just in another down cycle, and all will be well when oil and gas prices recover. The other says that there are fundamental changes underway that will make it difficult for fossil fuels to fully recover.

Mr. Russell seems to prefer the “just another cycle” approach. He presents reports in the Wall Street Journal on buy or hold recommendations by stock market analysts. Most of these analyst reports are for short-term actions, speculating which way an individual stock’s price will move near term. When stock price moves far enough in one direction, those same analysts reverse their advice.

Such reports help speculators move their money from one stock to another. They are hardly relevant to long-term investments of pension funds that will be needed many years in the future.

There are a number of signs that pressure is building to reduce the use of fossil fuels, and those pressures are not limited to tree-hugging environmentalists. For example, here are excerpts from a resolution proposed to the House of Representatives in September of 2015 by Representative Chris Gibson and co-sponsored by Representative Richard Hanna (both of whom represent districts covered by this newspaper) and 13 other Republican representatives:

“…Whereas, if left unaddressed, the consequences of a changing climate have the potential to adversely impact all Americans, hitting vulnerable populations hardest, harming productivity in key economic sectors such as construction, agriculture, and tourism, saddling future generations with costly economic and environmental burdens, and imposing additional costs on State and Federal budgets that will further add to the long-term fiscal challenges that we face as a Nation;…

Resolved, That the House of Representatives commits to working constructively, using our tradition of American ingenuity, innovation, and exceptionalism, to create and support economically viable, and broadly supported private and public solutions to study and address the causes and effects of measured changes to our global and regional climates, including mitigation efforts and efforts to balance human activities that have been found to have an impact.

In 2015, CitiCorp’s Global Perspectives and Solutions Unit came out with a lengthy report entitled “ENERGY DARWINISM II: Why a Low-Carbon Future Doesn’t Have to Cost the Earth.” The report concludes that the the cost of addressing climate change by reducing fossil fuel use and improving energy efficiency will be less than the cost of dealing with flooding of coastal cities, droughts, population displacement and other costs that are likely if action is not taken to address climate change. “Given that all things being equal cleaner air has to be preferable to pollution, a very strong “Why would you not?” argument begins to develop.”

Very recently, the chief financial officer of Shell made news by stating, “We’ve long been of the opinion that demand will peak before supply. And that peak may be somewhere between five and 15 years hence, and it will be driven by efficiency and substitution, more than offsetting the new demand for transport.” Until now, it was steadily increasing demand that drove this industry’s profitability and stock prices. Here is a senior person inside the industry saying that demand growth for the key transportation fuel sector will soon peak because of efficiencies and substitution of alternative fuels.

The foregoing are just a few examples of that would have been unheard of only a few years ago. There are many more examples that point toward fundamental changes in the fossil-fuel industry. There are also examples of large fund and institutional investment directors guiding their investment managers away from fossil fuels. Should the Village stand by and watch while large funds and foundations divest? These examples, combined with the weakened financial condition of most fossil fuel companies, which I covered two weeks ago, make the outlook for a cyclical type recovery very doubtful.

If Mr. Russell wishes to continue this exchange, I am happy to oblige. Or, we could perhaps give the readers a break and try to convince one another over a cup of coffee.