Editor’s Note: The Cooperstown Village Board unanimously voted Oct. 24, 2016, to divest fossil-fuel stocks in its fire and police department pension funds, setting off a debate between Trustee Lou Allstadt, the retired Mobil executive vice president, and David Russell, a lawyer, banker and former assistant counsel for pensions in the state Comptroller’s Office.  This is the first news report on the issue. 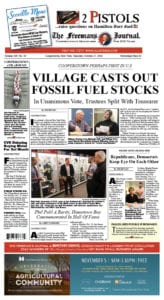 COOPERSTOWN – It is certainly a first in New York State, experts say, perhaps even in the nation.

The Village Board voted unanimously Monday, Oct. 24, to divest fossil-fuel stocks from an S&P 500 portfolio in favor of an S&P alternative of 475 stocks.  The smaller index – its symbol is SPYX – contains no fossil-fuel producers.

At first, contacts at Elected Officials to Protect New York and 350.org, two organizations formed to lobby municipalities to divest, noted that dozens of communities in the U.S., the first being Ithaca, have “committed” to divest and are encouraging the State of New York to do so.

But it turned out committing hasn’t equaled doing so.   ”After looking more closely at the commitment, it appears that this will technically be the first full fossil-fuel divestment (from coal, oil AND gas) from a public pension in the nation,” Lindsay Meiman, U.S. communications coordinator for 350.org, said Tuesday, Oct. 25.

Village Trustee Lou Allstadt, the retired Mobil executive vice president who has been leading village efforts to move away from fossil fuels, said $140,000 from the defined-benefit retirement plan for Cooperstown volunteer firefighters and emergency responders was invested in the S&P 500.

As a result of Monday’s vote, the money  will be shifted in quarters every three months for the next year.

Allstadt said this pension fund totals about $900,000, and the village has other money in the stock market.  “There are certainly fossil fuels in those categories … If we see something similar to the ‘X-fossil’ index, we’ll look at that, do our due diligence, and decide.”

The decision was not without some controversy, as it was made over the advice of Village Treasurer Derek Bloomfield, who – citing guidelines for CFAs (chartered financial analysts) – advised them that a fully diversified portfolio, including fossil-fuel stocks, is the most stable.

“Social investment should be done with one’s own money,” he added.

Historically, Bloomfield continued – and he underscored this was just his opinion – fossil fuels have done more to raise mankind out of poverty than any other development through the ages.

That caused Allstadt to shoot back, “I totally disagree with the statement that fossil fuels have been a boon to humanity.  They’ve created a great threat to humanity.”

Eventually, he predicted, fossil-fuel stocks will drop, and the village should get ahead of the curve.

Ironically, the trustees then accepted a sales tax report from Trustee Kuch showing July revenues up 27 percent over the year before, largely due to more fans buying gasoline, it was noted, to get back and forth from the record-breaking Griffey Jr.-Piazza induction.

In an interview the next day, Allstadt pointed out that, among others, Mark Carney, Bank of England president, warned Lloyd’s of London in September 2015 that trouble is coming in the fossil-fuel sector.
Personally, Allstadt said, he has divested fossil-fuel stocks with the help of a financial planner used by many former senior executives in Mobil and Exxon Mobil and feels comfortable doing so.

“In my 40-years plus following this, while working and in retirement, I’ve never seen a period with a convergence of so many negative factors for the industry,” he said.  “This is not just a typical down cycle. It’s the beginning of a paradigm shift.”

This is a logical outgrowth, and Bloomfield, a visiting professor of finance at Hartwick College who joined Village Hall less than a year ago, had been brought into the loop on the fossil-fuel resolution, most recently at a Finance Committee meeting last week, and again Monday, when Mayor Jeff Katz asked him to express his views.

“When you have concerns about a certain industry, it doesn’t make sense to hang on,” Allstadt said.  “You just don’t keep driving your car when you see a cliff ahead.”