What is frostbite and who is at risk? 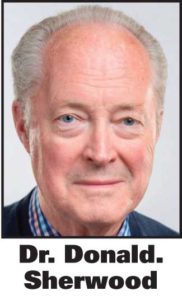 UNADILLA – Donald Thomas Sherwood, M.D., 74, of Unadilla, a surgeon in the Tri-Town area for a half-century, passed away peacefully at home on Jan. 21, 2019, surrounded by his loving family.
He will be remembered by his family as well as by the community that relied on his tireless work ethic, kindness, vitality, love of all God’s people and creatures, generous spirit, humility and insatiable quest for knowledge.
Born on Jan. 18, 1945, Dr. Sherwood was the third of seven children born to John Robert Sherwood and Helen Cullinan Sherwood at Sunnyside Hospital on Staten Island.
He attended Our Lady of Good Counsel grammar school, Cardinal Farley High School, and graduated Fordham University in 1966. He then earned his medical degree from New York Medical College in 1970. He was selected as chief surgical resident at Metropolitan Hospital in 1974 and became a Diplomate of the American Board of Surgery in 1975.
He married Joan Marie Sorokata in 1968, and moved his family to Sidney in 1975. He was chief of surgery at The Hospital in Sidney and cared for patients with his partners and friends at Gelder Medical Group for 40 years, from 1975 to 2015, while he also maintained evening hours at a satellite clinic in Unadilla.
In recent years, he provided medical services at Delaware Valley Hospital and at medical offices in Walton.
Dr. Sherwood had an ambitious vision for his family homestead, which he established at Stone House Farm in Unadilla in 1976. He tirelessly cultivated the land by planting trees, flowers and vegetables, breeding horses, and building a spring-fed lake, where he hosted family and friends each summer.
He was also an avid film enthusiast and enjoyed watching movies with his children and grandchildren, as well as reading classic literature, traveling and studying world history and ancient cultures.
He provided unending support for his children’s and grandchildren’s many endeavors, by cheering them on at sporting events, celebrating milestones, and steadily encouraging their growth and development. Last summer, he and Joan celebrated 50 years of marriage.
He was a major in the Army Reserves, for 10 years he serving the medical needs of various military outposts throughout New York, including West Point. He was an active Rotarian in Unadilla, where he was a past president, and was recognized as a Paul Harris Fellow. He was honored by Delaware Valley Hospital in 2018, recognizing his nearly 50 years of dedicated medical service.
Dr. Sherwood is survived by his wife, Joan, and their five children, Elizabeth, Paul, Michael, Matthew (Max) and Andrew; their spouses, Mike, Amy, Katy, Angela and Stephanie; as well as seven beloved grandchildren, Michael, Lily, Audrey, Ava, Amelia, Jack and Bridget.
He treasured his lifelong friendships with his siblings and their spouses, Robert and Julie, Lynn, Mary Beth and Ray, Patrick and Suzanne, Anne, and Michael and Liz. He loved and was loved by his nieces, nephews and their children.
He is preceded in death by his beloved brother Brian, and friend and colleague Dr. Joseph Lukose.
Calling hours will be held 7-9 p.m. Friday, Feb. 1 at C.H. Landers Funeral Home in Sidney. The Mass of Christian Burial will be held at Sacred Heart Roman Catholic Church in Sidney at 11 am on Saturday, Feb 2.
Arrangements are entrusted to the C.H. Landers Funeral Chapel, Sidney.