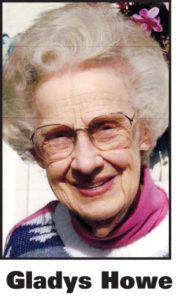 WESTVILLE – Gladys G. Howe, 97, a native of Cooperstown and a lifelong educator, passed away peacefully Sunday night, February 10, 2019, at the home of her daughter and son-in-law in Westville.
Born April 13, 1921, at the Clara Welch Thanksgiving Hospital in Cooperstown, she was a daughter of Edwin N. and Blanche O. (Palmer) Bowen of Lentsville in the Town of Middlefield.
She graduated from Cooperstown High School with the Class of 1937 at the age of 16. After spending another year at Cooperstown High School taking post graduate courses, she attended the State University College of Oneonta (now SUNY Oneonta). Upon graduation from college in 1942, she taught primary grades in the Bethlehem Center and Glenmont Elementary Schools in the Bethlehem Central School District in Delmar.
In 1961 she was initiated into the Alpha Kappa Chapter (Albany County) of the Delta Kappa Gamma, an honorary women educators society, international. After her retirement in 1977 she transferred her membership to the Rho Chapter in Otsego County. She was also a member of the Otsego County Retired Teachers Association and the New York State Retired Teachers Association.
Upon retirement in 1977, Gladys returned to the family homestead in the Town of Middlefield, and joined the Red Creek Valley Grange #1583 where her parents had been charter members. She was a member of Otsego County Pomona Grange, New York State Grange and National Grange. When Red Creek Valley Grange merged with Westville Grange #540 in January 1989, she continued active membership.
In 1983 she was honored as Outstanding Granger of the Year in Otsego County. She was named New York State Grange Subordinate Lecturer of the Year in 1983 and 1993. She served as Chaplain of Otsego County Pomona Grange from 1980-1991. She also served on the New York State Grange Committee on Women’s Activities from 1984 to 1987, and on the New York State Grange Lecturer’s Committee from 1987-1991.
She served terms as chairman of fair activities in the Grange building at the Otsego County Fair, as President of the Otsego County Lecturer’s Association, and as chairman of the Pomona Grange Committee on Women’s Activities. Gladys most enjoyed the office of Subordinate Lecturer, having served in that capacity a total of 34 years
Gladys had been a faithful member of the Cooperstown United Methodist Church since 1981, and served in numerous capacities in the United Methodist Women’s group.
From 1982 to 1985 she served as a member of the Home Economics Division Committee, Cornell Cooperative Extension in Cooperstown, and from 1981 to 1994 as a regular volunteer in the donor canteen of the Red Cross Bloodmobiles at St. Mary’s Parish Hall, Cooperstown.
Survivors include her daughter and son-in-law, Donna-Gene and Hugh L Francis of Westville; her granddaughter Victoria M. Francis of Sussex, New Jersey; and nieces and nephews, including Melanie Collins of Ravena, Brian and Alicia Bowen of Hartwick, Susan and Randy Gelatt of Burlington Flats, Timothy Bowen of Mentor, Ohio, Jennifer and Richard Smith of Schenectady, Jeffrey and Jennifer Bowen of Cooperstown, and Donald E. Bowen, Robert E. Bowen and James E. Bowen, all of the Albany area; and many grand-nieces, grand-nephews and cousins.
In addition to her parents, she was predeceased by her sister and brother-in-law, Josephine and Peter Paulson; two brothers and sisters-in-law, Donald E. and Priscilla Bowen and George E. and Katharyn Bowen; her nephews, David E. Paulson and Leonard W. Bowen; and her nieces, Pamela K. Wayman and Debora Liburdi.
In the Spring, a Funeral Service will be offered at the Cooperstown United Methodist Church with the Rev. Thomas LeBeau, pastor officiating.
The Service of Committal and Burial will follow in the Bowen family plot in Lakewood Cemetery, Cooperstown.
Arrangements are entrusted to the Connell, Dow & Deysenroth Funeral Home.