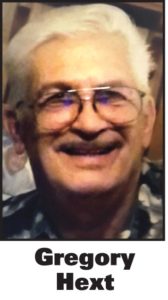 RICHFIELD SPRINGS – Gregory L. Hext, 74, a Vietnam veteran who worked for Remington Arms, passed away peacefully Tuesday evening, Feb. 12, 2019, at Bassett Hospital.
Greg was born Sept. 28, 1944, in Herkimer, a son to the late Gerald and Florence Price Hext. He was raised in educated in Richfield Springs.
After high school, he served in the Navy during Vietnam.
On June 25, 1966, he married the former Marilyn Pierson in St. John’s Episcopal Church, Richfield Springs, a blessed union of 52 years.
He was a machine operator for many years at  Remington Arms in Ilion.
Greg was a member of Sons of the American Legion, Richfield Springs. He was president of the Schuyler Lake Cemetery Board.
He truly loved the outdoors. During the summer he would enjoy a round or two of golf, but the best time for him was deer season. He was always ready in the woods with his trusty .270.
Greg will always be remembered as a kind man with a great sense of humor. He always had a joke that would brighten your day. A friend to many, he will never be forgotten.
Besides his wife, Marilyn, he is survived by his daughter, Laurie Hext of Richfield Springs; adopted son, Ashley Ross Matteson and his wife, Sandy of Sierra Vista, Ariz.; adopted daughter, Helene Ejdestam and her husband, Lars
Erickson of Sweden.
He is further survived by his brother, Gerald Hext Jr. and his wife, Sharon of Maine; four sisters, Sue Winne of Schuyler Lake, Penny Vandenburgh and her husband, George of Myrtle Beach, S.C., Starr Madaras of Schuyler Lake and Florence Thompson and her husband, Richard of Mississippi; adopted family members Bill and Hidie Stetson and family; as well as many nieces, nephews and cousins.
He was preceded in death by a brother, James Hext.
Funeral services were held Saturday, Feb. 16, at the Church of Latter Day Saints, Herkimer, with President Sean Davis officiating.
The family kindly asks that in lieu of flowers, memorial donations be considered to the American Heart Association. Envelopes were available at the church.
Funeral arrangements were entrusted to the J. Seaton McGrath Funeral Home, 40 W. James St., Richfield Springs.