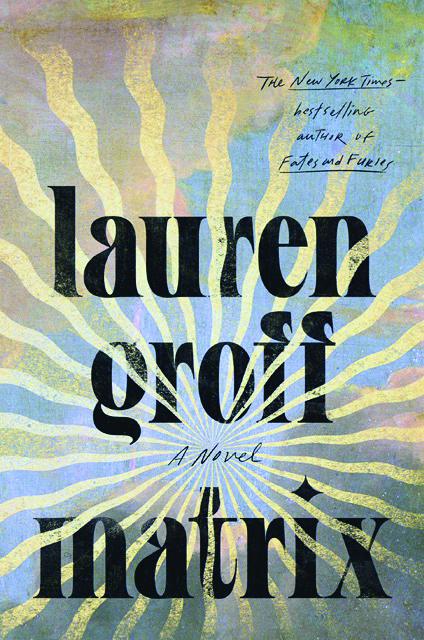 USA Today critic Steph Cha called the book “a relentless exhibition of Groff’s freakish talent,” and New York Times critic Kathryn Harrison wrote “it provides Groff a literary springboard into a past whose features offer a mirror to our own time.”

“Matrix” is a historical fiction novel based on Marie de France, the first French female poet best known for her collection of 12 narrative poems titled “The Lais of Marie de France” written during the 12th century.

As the back cover copy explains, “Marie, born the last in a long line of women warriors and crusaders, is determined to chart a bold new course for the women she now leads and protects. But in a world that is shifting and corroding in frightening ways, one that can never reconcile itself with her existence, will the sheer force of Marie’s vision be bulwark enough?”

“‘Matrix’ is also a meditation on power, and how we internalize attitudes to power even if we’re also trying to subvert it,” Groff said. “The great academic Judith Butler said that, ‘power not only acts on a subject but, in a transitive sense, enacts the subject into being,’ and the ways in which my Marie undermines the hegemonic power structures of the day, but also replicates them, was something I wanted to explore.”

While the main story is about a devoted nun leading her sisters in a forgotten abbey in the English countryside during the Middle Ages, “Matrix” includes acts of love, lust and sex, of war and violent deaths and it intentionally incorporates some prevailing issues like feminism and climate change, Groff said.

“I think that people often misconstrue historical fiction as sheer escapism, but, in my opinion, really interesting historical fiction is speaking of the past and the present at the same time,” Groff said. “I began this book at a time when I found the contemporary world just overwhelming, just impossible to fully understand, or even understand enough about it to do it justice in fiction. I felt morally shaky in even attempting it.”

“But I could talk about urgent issues by setting a book in the past. I could, as Emily Dickinson puts it, ‘tell it slant.’ One of the spurs to write this, and another historical fiction that I’m working on at the moment, is that I wanted to find a way to trace back, through a millennium, the roots of how we got here, at the cusp of climate apocalypse, which I tried to explore in ‘Matrix,’” she said.

Groff said the source of her latest novel was “triparate.” After graduating from Cooperstown Central School in 1996, Groff attended Amherst College where she said she studied ancient French.

“I fell in love with (Marie’s) lais, which are brilliant, fantastical stories in poetic form. I wanted to do a translation of the lais, but never quite got around to doing a final round,” she said. “The second strand was the day before the idea came to me, when I was on a plane and saw the extraordinary 1940s film, “The Women,” which has only female characters but, sadly, every conversation circles around a man — a missed opportunity!

“And the third and final strand was when I went to a lecture while I was a fellow at Harvard’s Radcliffe Institute for Advanced Studies and saw my friend, Dr. Katie Bugyis, give a talk on the liturgical practices of medieval nuns, and was so astonished and overwhelmed with joy that, as I was sitting there, the novel I wanted to write fell into my lap.”

Since little biographical information has been written about the real Marie de France, Groff said she built her protagonist’s character from her own works.

“There are so few actual facts about Marie de France known to historians,” Groff said. “They think she may have been a French woman in an English abbey, or perhaps an illegitimate child of a noble, or even, perhaps one of Eleanor of Aquitaine’s daughters. Nothing verifiable, alas.

“So all I had to work with were the texts that Marie de France left behind, her lais and her fables,” she said. “I plucked from both the most vivid imagery and ideas and built a kind of flash fiction out of these details, which gave rise to my imagined biography of a very real woman.”

Groff’s debut novel, “The Monsters of Templeton,” was based on Cooperstown and was a New York Times Bestseller and Editors’ Choice Pick. She followed that with “Delicate Edible Birds,” a collection of nine stories.

Her third novel, “Arcadia,” was a finalist for the Los Angeles Times Book Award, and her fourth book, “Fates and Furies,” was picked by President Barack Obama as his favorite book of 2015. It was also Amazon’s Book of the Year.

Groff said her upcoming works, though about different subjects and set at different places in different times, will have “overarching obsessions that link them.” They won’t be sequels, “I think they’ll just be weird sisters,” she said.

“I would hope very much that any reader of my work would come away with a great joy in the language of the books, with knotty and interesting questions to think about, with the pleasure that comes from reading an interesting story,” Groff said. “And, of course, because I grew up in small, beautiful Cooperstown, I think they’d recognize my urge to write about close-knit, thoughtful, sometimes claustrophobic, utopias!”