The best defense against coronavirus

WHO: More new cases outside China than inside

Trump takes a victory lap early on in coronavirus fight

How the virus spread through a religious group in South Korea

Los Angeles deputies search for stolen hearse with body inside

Baltimore ex-mayor releases apology video ahead of Thursday sentencing: ‘I really messed up’

What is Disease X?

150 Years Ago
News Items from Elsewhere – The employment of a young colored mechanic in the clock factory at New Haven so hurt the dignity of a dozen Irishmen that they demanded his discharge. They obtained, instead, their own discharges and their places were supplied by more sensible men.
Larry Larkin, an Irish boy who worked in the print works at Manchester enlisted in the 10th New Hampshire Regiment, fought bravely, was promoted to a captaincy, and is now Mayor of Weldon, North Carolina.
The Senate Military Committee has come to the tardy decision that Negroes who had been slaves were entitled to the same bounty as other volunteer soldiers.
February 1869 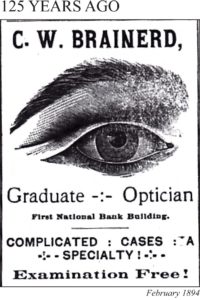 100 Years Ago
Oneonta boys have been too long neglected. While there has been aroused of late an increased interest in the work of the Boy Scouts it is felt that the Oneonta Y.M.C.A. affords an excellent opportunity for effective work. After several conferences between the directors of the Y.M.C.A. and the Oneonta Chamber of Commerce a drive to raise $5,000 – which is needed annually to put the association on a strong financial footing so that a man trained in boys’ work can be employed and the association can do the work the city so much needs – will soon be inaugurated.
The cause is one which should appeal to every loyal citizen as the boys of today are the men of tomorrow. The boys of the city are its greatest asset and one has but to open his eyes to see where many of the youths of today are drifting. The cause is urgent and the need great.
February 1919

80 Years Ago
John Thomas, a newcomer to the Oneonta High School Dramatic Club productions, will have the leading role of Buddy in the three-act comedy “Going on Seventeen,” to be given in the school auditorium on Thursday and Friday evenings, February 23 and 24. Buddy is the lad who is “Going on Seventeen” and around whose affairs the plot revolves. Playing opposite him in the feminine lead will be Miss Betty Griffin whose part is that of Lillums. She will also be making her debut before Dramatic Club audiences. Miss Harriet Nesbitt will be appearing in her third production as Florence Carhart, Buddy’s sister. David Epstein will be Shrimple, one of Buddy’s close friends. Miss Eleanor Huntington will play the part of the mother and Miss Martha Disbrow that of Agnes. Tickets may be secured at the Corner Bookstore or from members of the cast and at the door for each performance.
February 1939

60 Years Ago
Oneonta Mayor Roger G. Hughes said yesterday he is “emphatically opposed” to the city manager form of government. The topic was discussed at an informal meeting of aldermen Tuesday night with attorney Roger J. Hathaway and Dr. Sanford D. Gordon outlining the plan, known also as the “Council-Manager Plan.” Dr. Alexander F. Carson, Democrat, and former mayor, already has issued a statement against the plan, and Mayor Hughes did the same yesterday. “It doesn’t stand a chance passing the Common Council,” Mayor Hughes said. “All three Democratic aldermen are against it.” However, a check with all three Democrats showed they are open-minded on the subject. Only 14 of the 62 cities in New York State have city managers.
February 1959

40 Years Ago
Governor Hugh Carey tightened the budgetary screws on Oneonta State and several other state colleges through the mechanism of a “faculty rank adjustment” expected to raise howls from union and administration leaders alike at upcoming legislative budget hearings. Cut from Oneonta’s $16 million state purposes budget is $124,000 for the faculty adjustments. The state university as a whole was cut by $1 million. The adjustment is supposed to bring Oneonta’s faculty with those of “peer institutions,” according to Helen Baldo, assistant to college president Clifford Craven. Oneonta was found to have a disproportionate number of faculty in upper higher-paying ranks in the comparison study, she said. Faculty ranks start with lecturer and rise through instructor, assistant professor, associate professor, to full professor. The average salary of an instructor at state university colleges is $13,739. For some reason, the lecturers get more — $15,257. Assistant professors are paid $16,585, associate professors $18,690 and full professors, $20,512. The budget is intended to force the college to save by hiring new teachers at lower ranks to replace senior faculty who retire or leave.
February 1979

20 Years Ago
The 1918 flu that killed more than 20 million people may have quietly percolated for several years until suddenly growing strong enough to become the world’s worst pandemic according to a report issued by the Armed Forces Institute of Pathology. The gene likely “was adapting in humans or in swine for maybe several years before it broke out as a pandemic virus,” said molecular biologist Ann Reid, lead author of the study.
February 1999

10 Years Ago
“Carl Delberta was one of the greats.” Gary Dilello was reminiscing about his friend and mentor, Carl J. Delberta Sr., the founder of the Oneonta Boys and Girls Club and former professional boxer, who passed away at the Oneonta Nursing Home & Rehabilitation Center in Oneonta on Thursday, Jan. 22, 2009. He was 92.
Feb. 13, 2009