150 Years Ago
A Word to Teachers – Too much can hardly be said on the importance of teaching spelling more thoroughly, especially in the district school. All teachers expect to teach spelling, but only in connection with the study of the spelling book or the reading book. This is all well, but it is in our judgment not enough. It will not do the whole work so consistently or so well. We urge that the teachers should, to a certain extent, make a spelling lesson of every lesson. That is, every written exercise on the blackboard should be criticized as to the spelling, and the pupil should be made to correct his errors in spelling, just as much as the errors in the work itself. All peculiar and technical words should be given out by dictation to be spelled by the class as a necessary part of the recitation.
March 1869

125 Years Ago
Whoever attended the equal suffrage convention at the theatre last week could not fail to note the general lack of interest in the work among the women themselves. If women were at all enthusiastic for the ballot and for equal rights there is little doubt that they would succeed, as they invariably do when they put their minds and hearts to any work. But, so long as they are apathetic and indifferent there is little likelihood of change. And, after all this very apathy and indifference may be an indication that the gentler sex realize that the laws of our state are exceedingly generous to them, and that, save for the doubtful gift of the ballot, they have everything they could ask for.
The Universalist Society of Oneonta is to be congratulated on having one of the prettiest church edifices in this section. It will be dedicated April 2nd with Rev. Joseph K. Mason of Buffalo preaching the sermon and Rev. James D. Crosby of Troy making the dedicatory prayer. The music for the occasion will be by a quartette composed of Mrs. Brewster of Oxford, Miss VanCleft, Dr. Barnes and Mr. Titsworth, with Messrs Helms and Johnson rendering
instrumental selections.
March 1894

100 Years Ago
Thousands of Jews were slaughtered in a “pogrom” conducted in Buenos Aires, Argentina in early January according to a statement issued by the Zionist Organization of America, quoting a report it had received from the Argentine capital. According to this report, a “white guard” was organized there following a rumor that labor strikes in that city were the beginning of a Bolsheviki Revolution incited by the Jews. The report charged that, with the cooperation of the police, the “white guard” raided the Jewish quarters, “killing a number that cannot be estimated because all the bodies were buried in a common grave.”
A well-known baseball player returning to the U.S. from “over there,” frankly admits that the French have little, if anymore, liking for the national game of the U.S. than they had when the American Army brought it over. Nations do not easily understand or grow fond of the sports followed by other nations.
March 1919

80 Years Ago
The giant flying boat Yankee Clipper reported back to
the Pan American Airways base tonight that it was 743 miles out over the Atlantic at 7 p.m., riding a tailwind at 2,500 feet altitude. The Clipper, which soon is to inaugurate
passenger service to Europe, roared away at 2:34 p.m. carrying 21 men, the largest number ever to fly the Atlantic in a heavier-than-air machine. Aided by tailwinds the huge boat was flying at 175 miles an hour, considerably faster than its 150-mile cruising speed. It was believed the winds might reduce the plying time to the Azores to less than 18 hours. Several thousand spectators gathered to watch the takeoff, made without ceremony or fanfare. It was piloted by Col. Clarence D. Chamberlin..
March 1939

60 Years Ago
A winter voyage by the atomic submarine Skate has shown the Navy that its missile-firing subs, when they join the fleet, will be able to roam the north Polar Regions overlooking the Soviet Union in any season. The 267-foot undersea craft spent 12 days beneath the polar cap, logging 3,090 miles and surfacing 10 times through open or thin places in the ice. On March 17, the Skate surfaced exactly at the North Pole. EM/1 Wayne L. Winans, a native of Oneonta, is aboard the Skate. The electrician’s mate was also aboard when the Skate made the last Arctic trip and when it remained submerged for 39 days. He is the son of Mr. and Mrs. Leslie D. Winans, 10 South Belmont Circle.
March 1959

20 Years Ago
Antiques, herbs and dance steps will be among things old and things new at a Women’s Fair in Oneonta on Saturday, April 10. The Oneonta Branch of the American Association of University Women, for the first time, is presenting the fair at the Elks Club, 84 Chestnut Street from 10 a.m. to 4 p.m. A panel will appraise antiques between Noon and 3 p.m. The fund-raising affair will offer a spectrum of activities and information for women of all ages, said Helen Rees, past-president of the AAUW Oneonta Branch. .
March 1999 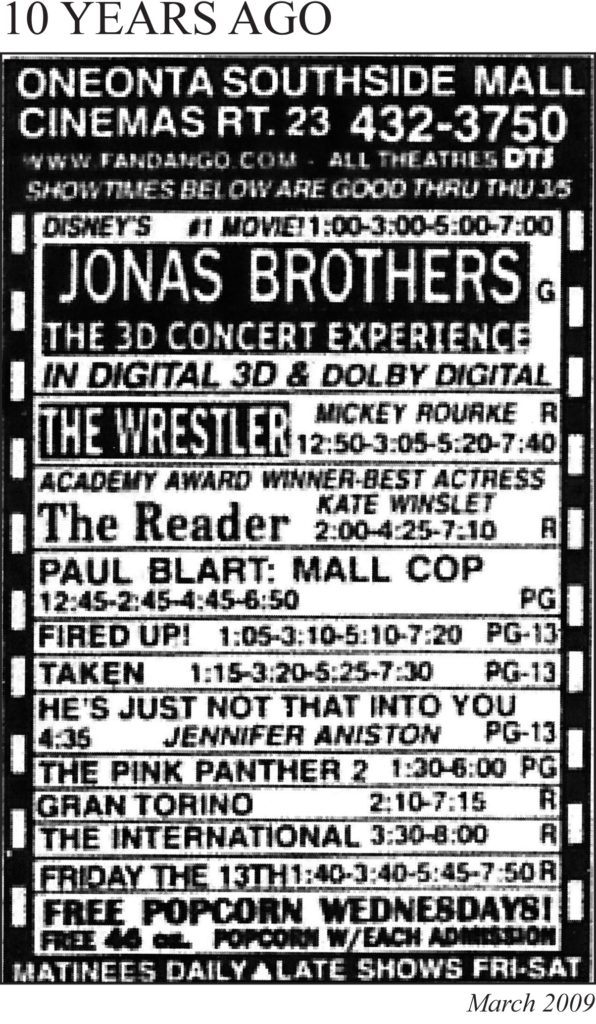 10 Years Ago
Oneonta High School’s Yellowjackets lost 39-35 to Section One’s Nanuet in the Class B state final Saturday at Hudson Valley Community College, closing their season with a 25-1 record. Two graduating seniors from the team, Madie Harlem and Meredith Ridgway are expected to continue competing on college basketball courts. Madie Harlem, a 5’ 9” guard will play for Division III Hamilton College next season. Harlem’s team-best 472 points and 18.2 average per game over the past two seasons led the Yellowjackets to a 43-6 overall record. Meredith Ridgway, a 6-foot forward averaged 10.1 points is undecided about plans for college. Oneonta’s Sienna Wisse, a sophomore, will be Oneonta’s top returning player next season.
March 2009