A surge in Covid-19 cases has experts urging states to pause reopening plans. Here's how things went off track.

Analysis: The US is diving into a dark Covid hole -- and there's no plan to get out

Analysis: Trump calls Hannity, claims Covid testing is 'the greatest thing that ever happened for the opposite party'

Covid-19 infected almost every patient at this hospital. Medics are overwhelmed

Watch Trump react to this ruling on his taxes

Lou Holtz decries push to scrap college football, other sports: 'What has happened to our way of life?'

Brandis Kemp, actress from ‘Fridays’ and ‘AfterMASH,’ dead at 76: reports

This Day in History: July 10 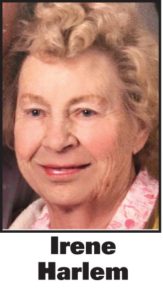 ONEONTA – Irene Harlem, 86, Oneonta, wife of the late state Supreme Court Judge Robert A. Harlem, passed away Feb. 25, 2019, at Fox Hospital.
She was born March 28, 1932, in Amityville, the daughter of Herman and Margaret (Wagner) Muller.
Irene grew up on Long Island, where she met and married Charles Mann in September 1951. In 1965, they moved to Mount Vision. Irene then married Judge Harlem in 1982; she worked for her husband as a law clerk.
After retirement, they enjoyed many years wintering and vacationing at the Venice Golf & Country Club in Venice Fla., where they lived.
Irene was a member of the Emmanuel Lutheran Church in Venice, Fla. She was an active member, rising through the ranks in the Order of the Eastern Star, becoming a state director of the Triangle Organization.
She is survived by her sons, Charles H. Mann (Karen Sue) of Mount Vision, Kenneth Mann (Barbara) of Oneonta, and Robert Mann (Karen) of Laurens; grandchildren Chuck Mann, Melissa Shaul, Kenneth Mann, Richard Mann, Nathan Mann, Stephanie Jelenevesky and Ashley Haag; several great-grandchildren; her sister, Marjorie Brush of Williamsburg, Va., and several nieces and nephews.
She was predeceased by her son, Donald Mann, her husbands, and her sister, Barbara Muller.
Visitation will be 3-5 p.m., Sunday, March 3, at the Lewis, Hurley & Pietrobono Funeral Home, 51 Dietz St., Oneonta.
A memorial service will be at 11 a.m., Saturday, March 9, at Emmanuel Lutheran Church, 790 Tamiami Trail, Venice, Fla.
The interment will be in the church’s Memorial Garden.
Contributions may be made to the Emmanuel Lutheran Church.
Arrangements are entrusted to the Lewis, Hurley and Pietrobono Funeral Home, Oneonta.