How to talk to your children about protests and racism

In Trash Cans In

COOPERSTOWN – If Frankie Panzarella, 13, hadn’t bumped his head, he and his dad Frank might never have come across the 2019 Winter Carnival Medallion.
“I was looking behind the trash cans in Badger Park and I hit my head on the corner,” he said. “I saw something taped to the side with black tape, but I didn’t know what it was at first.”
It wasn’t until he turned it over that he realized what he was holding.
“He asked, ‘What is this?’” said his dad, Frank, Bassett Medical Group vice president/COO. “And when I saw it was the medallion, we started screaming and high-fiving.”
The medallion was hidden on the back right side of the trash cans at Badger Park. “I felt fine once I found it!” said Frankie.
This is only the second year the Panzarella family has joined the annual hunt for the medallion and $500 prize, offered by The Freeman’s Journal & Hometown Oneonta. 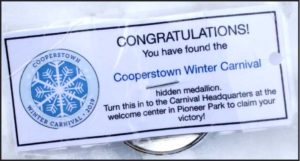 “The year it was on the Doughboy statue, that’s 100 feet from our front door,” said Frank. “We walked past it every morning! It motivated us to start looking.”
The whole family – mom Jennifer, sister Emma, 15, and Matthew, 8 – joined in the hunt. “We checked all the clues,” he said. “And I made a spreadsheet of all the Village properties. It was a team effort.”
Emma researched the Derrick Stack, while Mom and the kids searched the parks. “Jennifer and Matthew went to Badger Park a few days earlier,” said Frank. “I just had a feeling about it.”
Two clues stood out to him – “getting board” made him think of the hockey boards on the skating rink – and, “Don’t throw away this chance to win.’”
“I knew it had to be in a garbage can,” he said. “But we couldn’t figure out the Derrick Stack. It must have been in Pioneer Park at one point.”
According to Mohican Flowers’ Carol Waller, whose husband, Bill, devised the clues this year, the Derrick Stack was the chimney on furnaces from when the Derrick family had greenhouses in what is now Badger Park. Their name was written on the side, and the chimney was demolished when Bob “The Badger” Seaver gave the park to the village.
And Frank wasn’t even going to let last week’s polar vortex keep his family from that prize. “It was about 7:15 at night (Thursday, Jan. 31) Emma and Matthew were doing homework and Frankie was in his pajamas, and I said to him, ‘I know where it is.’”
Frankie got his coat and his boots, and the two returned to Badger Park. “I turned the truck around and turned the headlights on the garbage boxes, and we started looking.”
Even their one-year-old pup, Rocco, got in on the fun. “He was digging around the garbage box!” said Frankie.
They posted it on Facebook to let everyone know it had been found, and On Friday, Feb. 1, Frankie brought the medallion to school to show to his classmates. “I told him he had to treat it like a lottery ticket,” said Frank. “And to not let it out of his sight!”
They also had to endure being minor celebrities for the weekend. “People were coming up to us and saying they’d looked in Badger Park the day before, or that they were going there over the weekend to look!” he said.
Frank said they haven’t decided what to spend the $500 prize money on yet. “Maybe we’ll get matching tattoos,” he joked. “To commemorate our victory.”