COOPERSTOWN – Just in time for Martin Luther King Day, two state Historical Markers commemorating the United States’ march toward freedom – and Otsego County’s – have arrived at First Presbyterian Church here.
One marks Susan B. Anthony’s Feb. 9, 1855, appearance in a building where the church’s chapel is now. During her visit, she formed a local committee to advocate for the women’s right to vote.
The second commemorates July 4, 1827, when about 60 blacks gathered in the church, “with music and banners flying,” to celebrate the end of slavery in New York State.
The markers will be unveiled to the public at the church’s MLK Day celebration at 7 p.m. Monday, Jan. 21, at 25 Church St. and erected on the front lawn in the spring.
These were little-known events until Tom Heitz, who writes the Hometown History and Bound Volumes columns, discovered them in his weekly research for the Journal in the 1980s and ’90s.
“Then and now, history has a way of hiding from us, because the present doesn’t care,” said Heitz, who is Otsego town
historian and chairs the church’s history committee. “But then the present changes over time and suddenly forgotten history becomes more and more relevant and more powerful.
“I believe that was the case with this information,” he said.
The standard markers, which include a title and explanatory text limited to about 100 letters, were funded with two $1,000 grants from the Pomeroy Foundation of Syracuse, which has also underwritten local markers in Gilbertsville and Fly Creek.
Heitz said the Anthony marker will be placed in front of the chapel, where the suffragette, then only 33, spoke in a barn that had been converted to the church’s sessions’ building.
Also in the spring, when the ground thaws, the emancipation marker will be placed next to an existing marker by the front door that marks Cooperstown’s oldest church.
A CCAL class, from the Center for Continuing Adult Learning in Oneonta, got a sneak preview of the markers Tuesday, Jan. 15, when Heitz delivered a lecture on slavery in the county. When the local historian discovered the Susan B. Anthony citation in the 1990s, he found it “was previously unknown to national scholars.” At Rutgers, scholar at the Elizabeth Cady Stanton & Susan B. Anthony Papers Project “insisted the account was erroneous.”
Rather, Heitz discovered, since Anthony went on to Albany,  Schenectady and Troy, the publicity mentioned the larger venues but ignored Cooperstown and another stop further west.  When he found the 1827 citation, “it surprised me” since he had seen little reference to slavery in local histories. He later found there were hundreds of slaves in bondage here during the pioneering phase.
Nationally, slaves weren’t freed until the Civil War. But in 1817, Gov. Daniel Tompkins, who was also the sixth vice president of the United States, recommended legislation that would allow slavery to be phased out over 10 years. 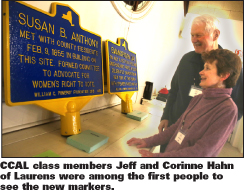