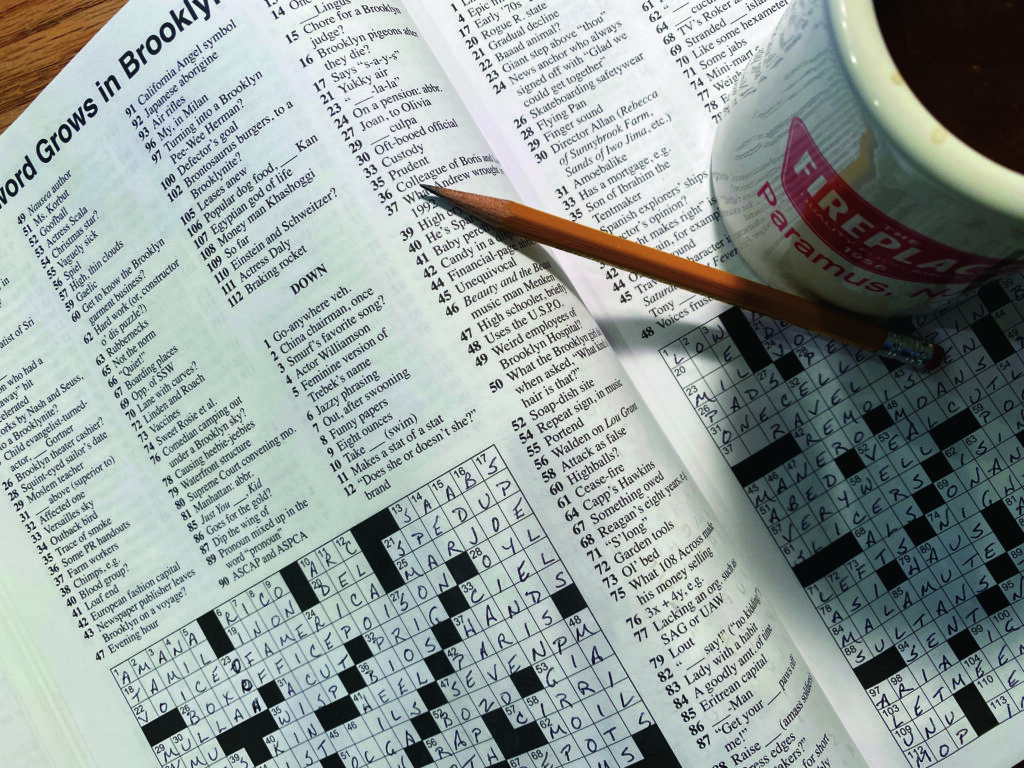 Opinion by Ted Potrikus:
A string of Merls: … puzzles that entertain

Mr. Reagle stole the show — unintentionally, I’m sure — in the 2006 movie “Wordplay.” It’s a documentary about crossword tournaments and the people who compete therein; The New York Times crossword editor and NPR star Will Shortz take up a lot of space in the movie, which also features former President Bill Clinton, Baseball Hall of Famer Mike Mussina, and comedian Jon Stewart waxing poetic about their love of the Times crossword.

But it’s Merl Reagle who outshines them all, constructing another masterpiece puzzle from scratch using only a blank grid, a pencil, and his uncanny wit. We meet him when he’s driving past a Dunkin’ Donuts.

“Unkind Donuts,” he says. “You just take the ‘d’ from the beginning of the word and move it to the end.”
I’m delighted that beginning this week, and exclusively to our print editions, The Freeman’s Journal and Hometown Oneonta will publish a puzzle from the giant stack of Mr. Reagle’s “best-of.” Sadly, he passed away in 2015; mercifully, his puzzles remain, filled with zip and fun and humor. Sometimes tough, but always entertaining.

“I could talk all day long about his technical skills,” said Michael Sharp, a lecturer at Binghamton
University, and known by crossword fans everywhere as “Rex Parker.” Dr. Sharp’s daily blog, “Rex Parker Does The New York Times Crossword Puzzle” (www.rexwordpuzzle.blogspot.com) is a must-read for those among us (including me) who have a grumble or two about that day’s puzzle.

“He made his grids free-hand,” Dr. Sharp said of Merl Reagle. “No puzzle software, no computer. For his time, his stuff is immaculate. The answers are long and playful, darting in and out of each other. He had an eye for wordplay and jokes. He would see and hear phrases and immediately started replacing letters and words and wondering the different ways he could turn them into something entertaining for his puzzles.”

“These are legitimately well-crafted and funny everywhere, right out of the box,” he said.

Mr. Reagle constructed puzzles for readers of the Washington Post, the Los Angeles Times, the Philadelphia Inquirer, the Arizona Daily Star, and others, with his little masterpieces syndicated across more than 50 papers each week. And now we have it here in The Freeman’s Journal and Hometown Oneonta.

As you might be able to guess by now, I’m a big fan of his work. And I think you will be, too.

High praise from the detail-orientated Rex Parker himself: “He wouldn’t go to press with a puzzle until it all worked,” he said. “Every theme answer hit. If there were five themers in the puzzle, he wasn’t
satisfied until all five of them worked. He showed me some of his notebooks — they were filled with unfinished theme answer sets because one or two of the themers were good but the others hadn’t cut it. It was amazing to see.”

So it’s off to your pencils — or pens, if you’re that kind of solver — with this closing thought from Dr. Sharp / Rex Parker:

“Merl Reagle created these puzzles only so that the solver would have a good time. Each one is a freewheeling education, every time.”

Answers next week, as they will be each week.