The impression Biden gave was unrecognizable compared to the President's mockery. Trump's efforts to portray his rival as senile could backfire.

See moment Biden got upset at the CNN town hall

Opinion: Why I confronted Trump at the town hall in Philadelphia

Trump voter to Biden: Excuse me, if I could finish ...

Carjacker held a couple hostage for hours then killed the husband, investigators say

Steve Harvey defends Ellen DeGeneres amid show scandal: She's 'one of the coolest and kindest people'

Massachusetts home where Lizzie Borden lived is selling for $890G

Phil Mickelson disgusted with first-round performance at US Open: 'I'm so sick of this'

Jordan Spieth struggles in US Open first round: 'It's not incredibly enjoyable'

Tyler Rich reflects on ‘constant grind’ of traveling 2,000 miles ‘back-and-forth between my dream and my wife’

Richard was born in Cooperstown, the son of Richard A. White and Barbara Hall. He graduated from Cooperstown Central School. He attended Menlo College in California and studied at many other colleges well into his adult life. He was in the military service in the Air Force within The States in the early ’70s.

During Rich’s high school days, some of the highlights were being a star half back in 1970 on one of the most storied football teams in the school’s history, and being an all-state wrestler. As a running back in football, he was known for cutting back against the grain, being extremely difficult to bring down, and second effort.

These traits followed through into his adult life, where Rich was not prone to going with the flow and was a wild spirit. He bravely battled health challenges for many years that would have brought a less-strong individual down long before.

Rich enjoyed physical work in his early adult life in New York State, Vermont, Alaska and other places, and was respected (and occasionally feared) for his strength.

In his middle decades, he enjoyed life in the Berkshires while doing some volunteer work at many places, such as the Berkshire Theater Group. Later in life, Rich’s passion was as an investor, and he researched and followed his latest stock pick with unrivaled enthusiasm and focus.

Richard called Stockbridge and the Berkshires his home for more than 35 years and expressed recently, as his body was struggling, how grateful he was for his time there in that beautiful place and for all the friends there that he loved.

Cooperstown was also always a home in his heart, as it is for all who grew up in that special town. He loved his family, extended family, and his dear friends in his hometown deeply.

Though coming from a “rough and tumble” youth, all the comments coming in from his Berkshire friends speak of his gentle, kind soul and his generous and non-judgmental nature. He will be missed in both places and others.

He was predeceased by his father, Richard A. White, and mother Barbara Hall. He is survived by his brother David White, his sister Ellen Weir, brother-in-law Michael Weir, and nephew Eli Weir.

One thought on “Richard White, 66; Cooperstown Native Dies In Berkshires” 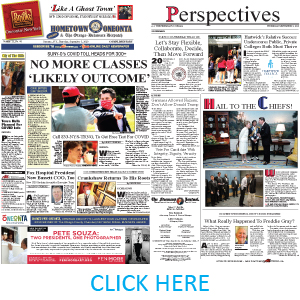