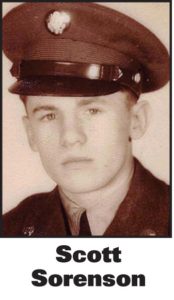 ONEONTA – Scott Sorenson, 86, a Korean War paratrooper and Scintilla (Amphenol) retiree, passed away Monday, Feb. 11, 2019 at the state Veteran’s Home in Oxford.
He was born on Jan. 3, 1933, in Otego, the son of Egnar and Ethel (Dodge) Sorensen. He married Margaret Ellen Simonds on March 6, 1954.
A veteran of the Korean War, Scott was a paratrooper in the Army. He was a member of the 187th Airborne Regiment and performed two combat jumps.
Returning home, he was employed at Scintilla in Sidney for 32 years. He also worked for many years with Carl Delberta at the Oneonta Boys Club.
An active person, Scott enjoyed paddling canoe and raced in the General Clinton Canoe Regatta many times. He enjoyed playing baseball and softball. He was an avid hiker and loved to ski and ice skate. A talented artist, he also loved to draw.
He belonged to many local groups and organizations, including the Oneonta Boys Club, the Oneonta Fire Department, the Elks Club, the Oneonta VFW and the Sixth Ward Athletic Club. He also served on the Board of Directors for the Oneonta Boy’s Club.
Scott is survived by his wife of 64 years, Margaret (Peg) Sorensen; his daughter, Laura (Bill) Hurley; his son Dan (Rose) Sorensen; his grandchildren, Meaghan (Steve) Sobers, Michael Hurley, Jenelle (Rick) May, and Sheldon (Stephanie) Sorensen; 10 great grandchildren; a sister, Dagmar (Don) Potter; and many nieces and nephews.
He was predeceased by his parents; and his sisters, Laura Mongillo and Anna Pearson.
Calling hours will be held 5-7 p.m. Thursday, Feb. 21, at the Lester R. Grummons Funeral Home.
A graveside committal service will take place in the spring at Oneonta Plains Cemetery.
Donations in Scott’s memory may be made to the Oneonta Boys and Girls Club, 70 River Street, Oneonta, NY 13820.
Arrangements are entrusted to the Lester R. Grummons Funeral Home.