MAHER: Miller Will Be Fierce Advocate for 121st

Miller Will Be Fierce
Advocate for 121st

As Supervisor of the Town of Montgomery I can say firsthand that I have been proud to call Brian Miller my New York State Assembly representative. While I know many of the folks reading this letter may be voting for Brian Miller for the first time, rest assured he will represent you well. He works hard, he listens and he has been a fierce advocate for issues that have been very important for the residents I represent. The 101st district is one of the longest in the State of New York. It is a two- to three-hour drive to many parts of the district. Brian Miller did his very best to make sure all of us felt represented even with this geographical challenge. I look forward to continuing to work with Assemblyman Miller and I know that he will continue to work diligently to improve the quality of life in any community he represents.

Publisher’s Note: We sent out an e-mail asking the candidates for the major political races in November to share information about themselves, so our readers can get to know them a little better. We asked them:
A. Please tell us about yourself.
B. If you were elected to office, what are your top priorities and why?
We will run these answers over the next few weeks, in hopes this will help in your decision-making process on Tuesday, November 8. Please get out and vote!

Meet the Candidates for
Representative in Congress, 21st District

END_OF_DOCUMENT_TOKEN_TO_BE_REPLACED

Are We Doing Political Debates Right? Let’s Talk About It

Are We Doing Political Debates

Right? Let’s Talk About It

League of Women Voters’ moderators lost control of the Monday, Oct. 22, debate between the incumbent Otsego County Sheriff Richard J. Devlin, Jr., and his challenger, retired state trooper Bob Fernandez.
Not the candidates – the League, to the point where moderator Barbara Heim of Oneonta threatened at least twice to shut it down and send home the 150+ attendees who packed The Fenimore Museum Auditorium, filled folding chairs in the aisles and crowded into the hallway, trying to hear the goings-on inside.
The dramatic highpoint came when Heim challenged the crowd: If you think you can do a better job, come up here. At that point, Tom Leiber of Oaksville, a pal of Fernandez going back to their high school days on Long Island, jumped up and volunteered.
That prompted the League’s debate organizer, Maureen Murray of Cooperstown, to jump up and, again, threaten that, if people misbehaved, she would kick everyone out.
Yes, the attendees – Devlin and Fernandez’
adherents alike – were pumped. Clearly, the League – this was the first co-organized by the Oneonta and Cooperstown chapters – didn’t know what to do.
And, of course, that was contrary to its
central mission: To help Democracy work. Why mistreat citizens interested and engaged enough to drive out, many from 22 miles hence, on a chilly, rainy night to participate in representative democracy?
Active citizens is what we all want – the League,
too – not what anyone wants to discourage.
•
Happily, in this season of debates leading up to the Nov. 6 mid-terms, the voting public was treated to an excellent contrasting example: The 19th District Congressional debate on WMHT, Troy, on Friday, Oct. 19, between incumbent U.S. Rep. John Faso, R-Kinderhook, and the Democratic challenger, Antonio Delgado of Rhinebeck. It was co-sponsored by Albany Times Union.
As you might expect, the experienced moderator, Matt Ryan, host of the station’s Emmy-winning “New York Now” program, was comfortable appearing before a crowd. He had three seasoned journalists – the Times Union reporter David Lombardo and Senior Editor for News Casey Seiler, and Karen Dewitt from WAMC and a 10-station network of NPR stations.
At the outset, Ryan welcomed the audience to applaud “one time” when the candidates were introduced, then to refrain for a logical reason: “So we can ask more questions” within the one-hour limit.
Each candidate was given 90 seconds to answer to a question;
the rival 45 seconds to react – and that was it. Ryan halted any candidate who then tried to jump in. However, given the brisk pace, a candidate who may have felt shortchanged had a chance to expand his comment in responses to later questions.
Blood was drawn. Delgado tried to pin “racist” ads on Faso. Faso noted Delgado moved to the 19th from New Jersey two years ago, then immediately registered to run for Congress.
By the end audience members were given ample insights to help guide their votes, which is the point
•
In an interview with WMHT’s Ryan, it became clear that, even with a pro, soft skills are essential.
A time clock flags the candidates at 30 seconds, 15 seconds and zero, when bell rights softly, so no candidate is surprised. Ryan says he won’t just cut candidates off in mid-sentence. He gauges whether a candidate is just wrapping up and, if so, will give him a few seconds. If it looks like the candidate is warming up the topic, Ryan will politely – important word – move on.
The set-up of the room is important, too. Remarking on the argumentative Cuomo-Molinaro gubernatorial debate a few days later, he noted the candidates were too close to the moderator, allowing them to dominate. At the WMHT debate, Ryan was at a lectern, with candidates seated on one side, reporters on the other, establishing an air of formality.
Likewise, with proceedings being aired on live TV, candidates and audience alike tend to be better behaved, Ryan said. Locally, the debates have been videotaped for rebroadcast in the past, but that didn’t happen this time.
•
Bottom line, mistakes were made by people of good will. But a repeat should be avoided. The League organizers would be wise to convene a conversation of stakeholders – League organizers, the county Republican and
Democratic chairs, a winning and a losing candidate, representatives
of the press, and frequent attendees from the public – after Nov. 6 to talk through the whole approach. Maureen Murray was intrigued by such an idea.
Some additional issues:
• Two Otsego debates were cancelled because one of the candidates, Assemblyman Magee in the 121st District then Delgado, demurred. Thus, one candidate’s refusal to debate can prevent another from communicating his/her message to voters. That’s not right.
• A media representative from this newspaper was removed from the panel because a candidate objected. The reason given: the newspaper had endorsed the other candidate in the primary. The League shouldn’t punish a free press for making endorsements; the candidates shouldn’t control the League’s debate.
• Should the League have the exclusive franchise on local political debates? Maybe it could take the lead in forming an independent entity – it would include League representation, of course – to make sure all the local expertise available is brought to bear.
In commenting on AllOTSEGO’s
Facebook page, former Hartwick Town Supervisor Pat Ryan ended her critique with: “This opinion in no way is meant to disparage all of the good work the League does in supporting our right to vote and be informed on the issues!”
But, she added, “Let’s talk about the ground rules for the
Lincoln/Douglas debate, which was a true debate!” A true debate, indeed: frank, content-rich,
pointed and sufficiently polite, leading the best candidate to
victory at the polls. Indeed,
that’s the goal.

If for nothing more than the knowledge he’s gained about Otsego County and its issues in 40-some visits over the past year, Brian Flynn is the logical
candidate for local Democrats to support in the party’s 19th Congressional District primary Tuesday, June 26. The polls will be open from noon to 9 p.m.
Absent someone actually from Otsego County – Cooperstown’s Erin Collier was an attractive entry, but it appears she got involved too late to gain sufficient traction – we need a candidate in a Hudson-Valley-heavy field who cares about Oneonta and Greater Cooperstown.
We also need a congressman who’s strategic, and Flynn has proved he is: By focusing on Otsego, plus Schoharie and Delaware, while others ignored us, he may have carved out the relatively few votes, perhaps as few as 4,500, to win in the seven-person race.

Flynn has also sought out key local folks for his campaign staff, including the brainy Leslie Berliant, who ran for county rep from the Town of Middlefield last fall, and MacGuire Benton of Cooperstown, former Otsego County Young Democrats’ president. Clark Oliver of Oneonta, Benton’s successor at the YDs, was also on the staff for a while.
And Flynn’s also courted and largely won over most of the county’s top Democrats, from county Rep. Gary Koutnik, Oneonta, the ranking Democrat on the county board, to activists Deb Marcus of Oneonta and Melinda Hardin of Cooperstown, to the potent Sustainable Otsego leadership.
(Oneonta Mayor Gary Herzig, referred to Jeff Beals by a cousin’s wife – no, Beals is not the mayor’s cousin – has been the odd man out in supporting the Woodstock teacher-by-way-of-the-CIA.)
Flynn, while he’s only lived fulltime in the 19th for less than two years – with wife Amy and children Bo, 14, and Heddah, 10 – he has roots, and family roots. He has owned that home in Hunter in Greene County’s ski country for the past 13 years (and bought the property 15 years ago, after a fire, and rebuilt it.) And his grandfather was a bartender and grandmother a chambermaid in Catskill hotels. The Michael J. Quill Irish Cultural Center in East Durham, on the road from Cobleskill to Catskill, is named after a great uncle.
Moreover, he’s got the energy, the brains, an engaging personality, the high-level contacts – his partner in Schlossberg:Flynn, an investment firm, is Caroline Kennedy’s husband, Ed – and the money – both he and big-firm lawyer Antonio Delgado have raised almost $1 million – to win, and this should matter to Democrats.
•
Whether it should matter to the rest of us remains to be seen, as Flynn and our current congressman, Albany veteran John Faso, R-Kinderhook, sharpen their focus on the issues from the end of June to November.
As we’ve noted here before, Faso would be unobjectionable in normal times; he’s done what a congressman who wants to make a difference would normally do: Get key committee posts, cleave to the party line, but break with the party when sensible, on the merits and on the politics, to do so.
Both of these candidates could
capture the middle, and thus win.
But as Nov. 6 approaches, if it appears – as historical precedence suggests it might – that the House of Representatives will be recaptured overwhelmingly by the Democrats, then a switch to Flynn might make sense.
For now, Brian Flynn, who has gotten to know Otsego County, and vice versa, is the clear and best choice for local Democrats.
A strong turnout – even better, one that clearly is the clear factor in his nomination next Tuesday – would
lock in that relationship for the
benefit of both. 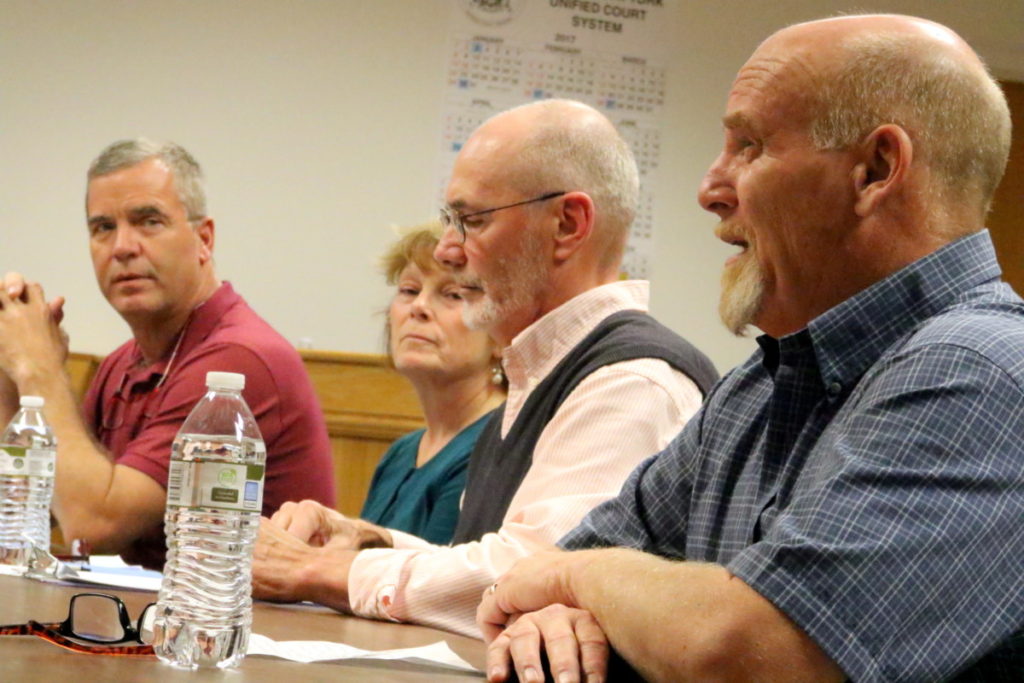 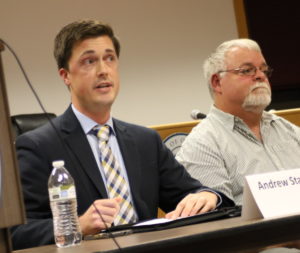 Oneonta Town Board candidates, from left, Republican Dan Baker, Democrats Patricia Jacob and  James McCue and Republican Randy Mowers answer questions about the town-city fire contract, economic development and environment, how the town will operate under the tax cap, and what they thing about XNG trucks going through the town. The four were proceeded by, at right, county Rep.  Andrew Stammel, D-Town of Oneonta, and his Republican challenger, Breck Tarbell, right, who read position statements to a crowd at the town hall in West Oneonta. The event was hosted by the league of Women Voters. (Ian Austin/AllOTSEGO.com)

City Council And County Board Candidates Square Off at Debate