The health department reported 2,674 new virus cases Thursday. Earlier this week, the state reported the most deaths in a single day since the start of the pandemic.

Opinion: US is following this disastrous Trump advice

Any attempt to get herd immunity would lead to massive death tolls, Fauci warns

Brianna Keilar reacts to Dr. Atlas: I'm sorry but what the hell is he talking about?

'It's nothing new.' Cooper rolls the tape on Trump birtherism

Analysis: Why Trump's birtherism attack on Harris is killing the Republican Party

Dodgers' Joe Kelly calls Astros 'cheaters,' says they snitched on GM: 'They're not respectable men to me'

Ranked 30th, she nonetheless led the field for women.    The second most influential was Kim Ng, MLB’s senior VP of baseball operations, ranked 40.

END_OF_DOCUMENT_TOKEN_TO_BE_REPLACED

Featured In This Week’s Editions

OUR NEWSPAPERS AVAILABLE AT THESE FINE ESTABLISHMENTS 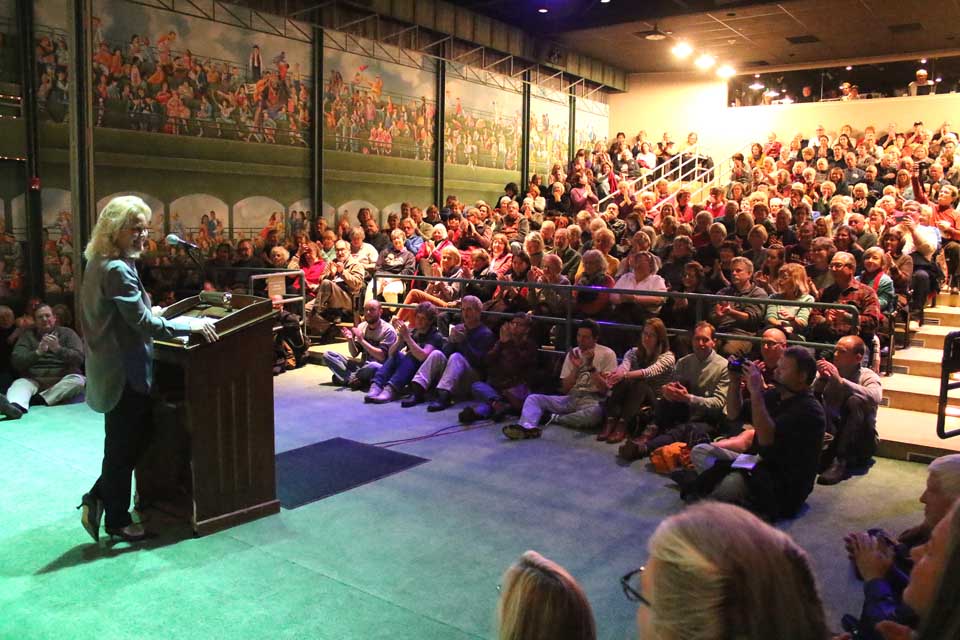 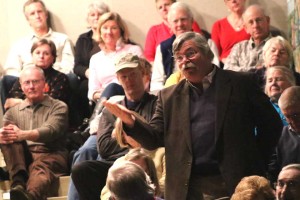 In a rare local public address, Jane Forbes Clark, Cooperstown’s #1 citizen, packed the Hall of Fame’s Grandstand Theater to overflowing this afternoon with a talk on her family’s legacy in Cooperstown and Otsego County. She detailed the activities of The Clark Foundation (college scholarships, plus much more), The Scriven Foundation (support for local charities, plus much more), and the one for-profit entity, The Leatherstocking Corp., which operates The Otesaga, The Cooper Inn and The Leatherstocking Golf Course.  In all, she said, the Clark interests employ 4,000 people.  She was greeted with warm applause, her remarks and answers to questions were frequently interrupted by more applause, and the hour-long presentation – 20 minutes formal; 40 minutes Q and A – was capped by a standing ovation. In particularly, the scholarship program, which has helped 11,000 high school graduates attend college since 1961, was singled out for repeated praise.  At Miss Clark’s urging, Gary Kuch, scholarship program director, at right, recounted receiving a note from a recipient and her family, which read, “You have given us back our dream.”   The theater’s 190 seats were filled, folding chairs were added, and some folks sat on the stage, but more than 100 people were still lined up when capacity was reached; Miss Clark agreed to repeat the talk at a later date to accommodate everyone who hoped to attend.   The event was organized by the Friends of the Village Library as part of its Sunday Series.  (Ian Austin photos for AllOTSEGO.com)

“Yogi Berra was an American icon, whose impact on baseball and everyday American culture was enormous. Yogi connected with every baseball fan, as a 10-time World Series winner with the New York Yankees, as one of the world’s most notable personalities, and as one of baseball’s most beloved Hall of Fame members. His contributions to our game and to our country will never be forgotten. The National Baseball Hall of Fame sends its sympathies to his family and to every baseball fan who adored him.”

“The Hall of Fame mourns the loss of a baseball legend, great American, tremendous family man and modern day philosopher. His baseball abilities and acumen are evidenced by his Hall of Fame election in 1972 and as the only manager in history to take both the Yankees and Mets to the World Series.  He joined the Navy at 18, was married to his beloved wife Carmen for 65 years, and had more fun with the English language than any player in history. He will especially be missed in Cooperstown where he was beloved by his fellow Hall of Famers and his adoring fans.”

COOPERSTOWN – Howard Chase Talbot, Jr., retired National Baseball Hall of Fame director – the equivalent at the time of today’s president – from 1976 to 1993, passed away with his family by his side Saturday evening, July 18, 2015, at Bassett Hospital.  He was 89.

Raised in Edmeston, “Juney,” as he was known to his parents, attended Edmeston Central School and later Manlius Military Academy.  He spent many summers of his youth on the shores of Otsego Lake as an attendee and counselor of Camp Chenango.  Howard would go on to share a lifelong enjoyment of the outdoors with his family and friends.

On Dec. 15, 1943, he was inducted into the Army, serving his country during World War II with the 426th Field Artillery Battalion.  Upon receiving his Honorable Discharge from the Military on May 6, 1946, Howard returned home and obtained a degree from the Utica School of Commerce.

END_OF_DOCUMENT_TOKEN_TO_BE_REPLACED

THIS WEEK’S EDITIONS AVAILABLE AT THESE FINE ESTABLISHMENTS

COOPERSTOWN – With a laugh-eliciting comment, “this could be dangerous,” benefactress Mrs. Lewis L. “Bunny” Hamilton cut the ribbon this evening on a lake-side amphitheatre named in her honor at “Otsego: A Meeting Place,” the Native-American-themed exhibit behind The Fenimore Art Museum.

She used a pair of shears crafted especially for the occasion in The Farmers’ Museum blacksmith shop.  NYSHA President Paul D’Ambrosio presented the shears to Mrs. Hamilton as a memento of her participation in the project.

A hundred well-wishing guests gathered on a slope leading down to Otsego Lake for the occasion.  After the ceremony, Perry Ground, a traditional story teller from the Onondaga Turtle Clan, recounted a traditional story about “Turtle Island – which you know,” he told the audience, “as Earth.”

END_OF_DOCUMENT_TOKEN_TO_BE_REPLACED

Bassett has reached out to its neighbors, and the neighbors – disgruntled as recently as Sept. 29 at a Village Hall hearing on simplifying the hospital’s planning challenges by placing it in a single “institutional zone” – seem satisfied for now.

“They said, ‘We don’t have a plan. We’re working on it. That’s why we’re here today’,” said Frank Capozza, who lives on the corner of Beaver and Pioneer. “I thought it was a very good meeting,” he added.

The impression the neighbors received was what the hospital trio intended, said Dr. Brown in an interview. The idea of the meeting, held in the hospital’s Clark Auditorium, was “to listen and not to speak.” He added, “This came from our need to be better day-to-day neighbors.”

He divided the inputs under four themes:

• One, “employee impact on neighbors.” For instance, despite pavilions for smokers set up around campus, employees who leave the non-smoking buildings during breaks are still problematic for neighbors.

• Two, parking. “Everything in Cooperstown is about parking,” Brown quoted one attendee as saying. Neighbors were concerned about people parking all day long in side streets where that’s allowed; that’s particularly in winters, when snowplows plow in parked cars.

• Three, bus routes. It was suggested that as Bassett’s current gasoline-powered buses wear out, they are replaced with quieter propane-powered buses. Another suggestion was reducing the number of bus stops and the number of times buses complete the loop between the hospital and parking lots. And perhaps reducing and centralizing bus stops.

• Four, properties acquired by Bassett on streets surrounding the hospital. “Who’s there and for what purpose?” the neighbors asked.

At the meeting, Brown was able to announce what may be a partial solution to complaints about clanking snowplows clearing Bassett lots in the wee hours after storms: Some of the plows have been fitted with hydraulic drops, so they can be more silently lowered than the gravity-drop ones.

After the inputs are digested, further meetings will be held with neighbors to ensure concerns are being met to the degree they might, said Brown.

As for neighbors attending, both Waller and Capozza repeated a remark by Miss Clark that, while Bassett doesn’t necessarily object to the “institutional zone” that prompted the Sept. 29 outpouring, the hospital did not seek the zone.
Capozza said it was suggested the hospital make more use of “the back door” – Route 33, outer Susquehanna, Brooklyn and Estli avenues – to access the hospital, rather than Route 28 to Beaver, the major access now.

Also clarified was a concern that the hospital is planning a “dormitory” for the 20 medical students enrolled in the Bassett-Columbia Presbyterian medical school. It’s not happening, the gathering was told.

In the interview, Brown, who has been at the helm since July 1, said Bassett did its last master plan seven years ago, but that it was largely set aside because of its impact on the neighborhood.

COOPERSTOWN – Few people realized the Baseball Hall of Fame’s potential when it was officially opened on June 12, 1939, 75 years ago this year.

Not Homer Osterhoudt, then a young man in his 20s standing in the lower left of photos taken that day of the throng in front of 25 Main.  (Osterhoudt, now in his mid-90s, has attended every induction except three since then.)

At the time, Osterhoudt had spent the past two years on the construction crew of what he thought would be “a little museum on Main Street” and was somewhat taken aback that day by autograph seekers clamoring around Honus Wagner when he arrived at the passenger depot behind Bruce Hall’s.

A country boy, raised on a farm near Phoenix Mills, he’d never seen a crowd as large as the one that gathered to christen the Hall that day.

END_OF_DOCUMENT_TOKEN_TO_BE_REPLACED

COOPERSTOWN – “Fifty thousand people are expected to pour into Cooperstown this weekend to help celebrate the induction of six legendary names into the National Baseball Hall of Fame,” CBS This Morning reported today.

“But as CBS News travel editor Peter Greenberg reports, the chairman of the Hall has a unique history of her own, and she doesn’t even work for the major leagues,” it continued.

“‘I hope someday that some of the young fellas coming into the game know what it’s like to be a part of the Hall of Fame,’ said Jane Forbes Clark. She is the Hall’s chairman, and granddaughter of its founder, Stephen Carlton Clark.”

HEROES OF GAME CUT CAKE ON HALL OF FAME’S 75TH