Thrilling Season Comes To An End

Comes To An End 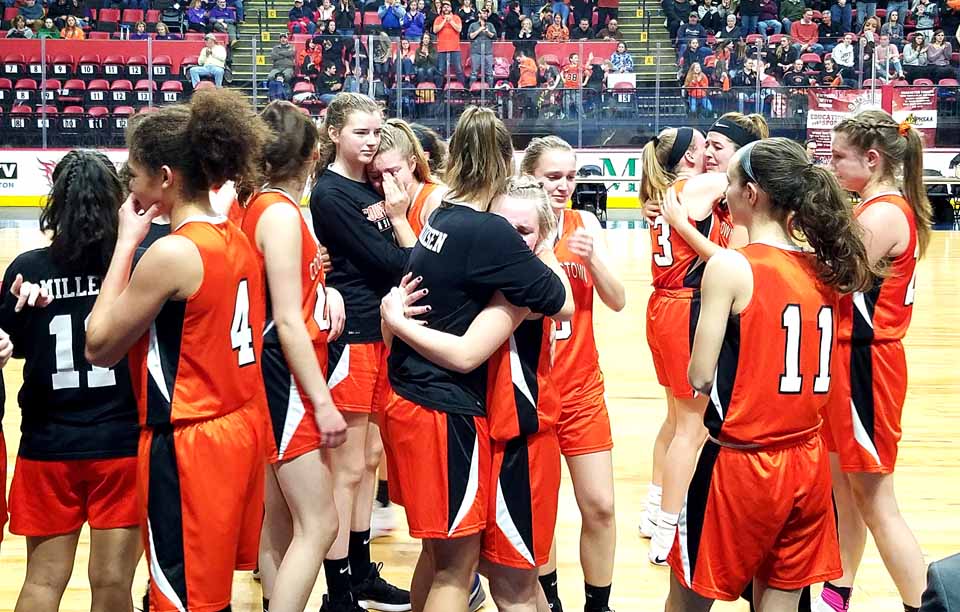 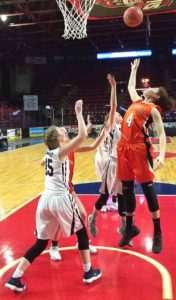 Cooperstown’s Lady Hawkeyes console each other after bowing to Watkins Glen, 60-49, in the state semifinals this afternoon at the Broome County Veterans Memorial in Binghamton. The girls had their best season since winning the state championship in 2015. At right, CCS’ Meagan Schuermann battles under the basket during this afternoon’s game. Check back: The Hawkeyes’ boys basketball team, are leading 23-12 at halftime, also in Binghamton. (Ian Austin/AllOTSEGO.com)

SYRACUSE – Hot on the heels of the Hawkyes’ victory this afternoon, the CCS girls basketball team also defeated the Weedsport Warriors, 63-60 at Onondaga Community College, assuring that they too will advance to the Section III championships.

RECAP OF SEMI-FINAL GAME ON SYRACUSE.COM 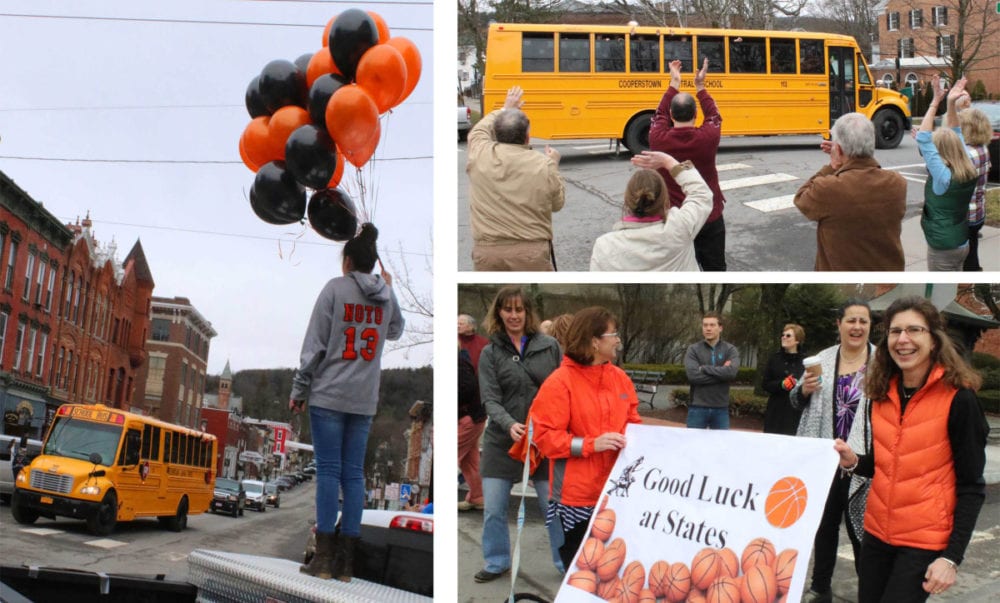 Balloons and cheers sent off the CCS Lady Hawkeyes, who paraded down Cooperstown’s Main Street this morning on their way to the state finals at Hudson Valley Community College in Troy. Left, Christina Noto, standing atop a pick-up truck, readies to release balloons as the bus drives by.  Top right, the Cooperstown Town Board cheers as the girls drive by.  Bottom right, Maureen Schuermann and Jen Millea cheer for their daughters, Maggie and Liz.  The girls play Pine Plains at 2:45 p.m. tomorrow, and if they win, head to the state championship on Sunday (Ian Austin/AllOTSEGO.com)

COOPERSTOWN – The Lady Hawkeyes will face Pine Plains of Section 9 (winner Saturday over Section 8’s Haldane) in the state semi-finals at 2:45 Saturday at Hudson Valley Community College in Troy, with the winner going on the finals at HVCC the following day.

WHITEBORO – A few seconds ago, the Lady Hawkeyes won a berth in next weekend’s Final Four with a 62-44 victory over Watkins Glen.

The girls roared back from a nip-and-tuck first quarter to dominate the hardwood at state quarter-finals at Whitesboro High this afternoon and overwhelm Watkins Glens, the same team they defeated in the state finals last year.

For a second year in a row, the CCS girls now head to the state’s Final Four next weekend.

With Memberships To Fenimore, Farmers

TROY – The Hawkeyes were 47-47 with 2:30 to go, and baskets by the Noto sisters, Liz Millea and Jen Flynn helped give the CCS team the winning edge of 59-50.  The girls return to Troy at 11:45 a.m. tomorrow for the finals.  Pine Plains and Northern Adirondack are now battling it out in the Troy arena for the right to play Coop in the finals.