Of Laurens; Mother Of 7 Children

Barbara graduated from Holy Names Academy in Albany.  She held several jobs during her lifetime, her most treasured was being a mother and grandmother.

END_OF_DOCUMENT_TOKEN_TO_BE_REPLACED

LAURENS – Donna Jane Whitmore of Laurens passed away peacefully on July 26th, 2018 surrounded by her loving family. She was born on Oct 23, 1945 to Donald and Clara Scanlon and was the oldest of four siblings. She married her Toad (Ronald ‘Toad’ Whitmore) on December 10, 1966 and they were blessed with two daughters, Jodi and Julie.

Donna worked at the State University College at Oneonta for over 30 years. She worked in Accounts Receivable where she was very loved by her co-workers and was a mentor to many. END_OF_DOCUMENT_TOKEN_TO_BE_REPLACED

LAURENS – Donald R. Bush, a decorated Vietnam War veteran and former mayor of Laurens, passed away peacefully on July 26, 2018, at Bassett Hospital after an extended illness.

Born, July 25, 1944, he was the son of Walter K. Bush and Olive (Spoor) Bush.  Born and raised in Laurens, Don graduated from Laurens Central School in 1961.  After graduating high school, Don worked at Phillips Buick in Oneonta.

END_OF_DOCUMENT_TOKEN_TO_BE_REPLACED

LAURENS – JoAnn Gravelin, 70, of Laurens, office manager at Rent-A-Wreck until her retirement, passed away peacefully on July 12, 2018, at Bassett Hospital.

JoAnn was born on April 7, 1948, daughter of the late Benjamin and Marian (Harris) Keator. JoAnn married her high school sweetheart, David Gravelin, on April 22, 1967, in Laurens.

JoAnn loved to cook, garden and have family gatherings during the holidays. Her family was always her first priority, and she had a deep passion caring for them.

END_OF_DOCUMENT_TOKEN_TO_BE_REPLACED

CLERMONT, Fla. – The human remains found buried beneath a fire pit in the backyard of a Lake County home have been positively identified as belonging to Michael Shaver, a Laurens man missing since 2015.

According to Lieutenant John Herrell, Office of Professional Standards with the Lake County Sheriff’s Department, detectives positively identified the remains found on Laurie Shaver’s property at 9850 Sandy Pines Road in Clermont, Fla., following testing. Those results were released by Herrell this morning.

END_OF_DOCUMENT_TOKEN_TO_BE_REPLACED

LAURENS – A Sherburne man was arrested by the Otsego County Sheriff’s Department after he allegedly stole five guns and other items from a Laurens residence.

According to the complaint, Richard Garreau, aka Ricky Diamond, 22, was allowed to live with and was given a job by the victim. After Garreau moved out, the victim allegedly found that five guns and other personal items had been stolen from the residence and filed a report with the Sheriff’s Department.

END_OF_DOCUMENT_TOKEN_TO_BE_REPLACED

Bone Found In Florida May Belong To Missing Laurens Man

LAURENS – Police believe that human remains found buried underneath a fire pit in the backyard of a Lake County, Florida, home may belong to a Laurens man last seen in 2015.

According to the Orlando Sentinel, Michael Shaver, 36, was reported missing in February by a close friend who said that no one had heard from Shaver since October 2015.  All activity in his bank account stopped at that time, too.

When sheriff’s Deputies went to the Shavers’ home on Feb. 16, his wife, Laurie Shaver, 35, also told them she had not seen or heard from him since 2015.  She allowed deputies to search the home, but as they walked with her to the backyard, they noticed a large depression in the back yard and noted that there was a fresh layer of concrete, the newspaper reported. END_OF_DOCUMENT_TOKEN_TO_BE_REPLACED

ONEONTA – The suspect in last night’s double homicide in Laurens is being arraigned in the Town of Oneonta court at this hour.

This is a developing story.

Please check back for details.

Double Homicide Suspect In Custody After I-88 Crash

Into Custody After I-88 Crash

SCHOHARIE – The suspect in last night’s double homicide in Laurens was taken into custody following a crash on I-88 in Schoharie, according to Sheriff Tony Desmond.

According to Desmond, sheriff’s deputies received a “Be On The Lookout” alert for a red Chevy Colorado pickup truck from the Otsego County Sheriff’s department. Deputies stationed near Richmondville saw a truck matching the description headed eastbound on I-88 and began to follow. After confirming the license plate matched the one in the alert, deputies allegedly attempted to pull over the suspect, who then sped up and a chase ensued.

END_OF_DOCUMENT_TOKEN_TO_BE_REPLACED

LAURENS – Otsego County Sheriffs have detained a suspect in a double homicide in the Town of Laurens last night.

Sheriff Richard Devlin Jr. said that a relative of the deceased called 911 at 8:49 p.m. to report that they had found two adult family members dead inside their residence.  Devlin declined to specify the age, gender or relationship of the deceased.

END_OF_DOCUMENT_TOKEN_TO_BE_REPLACED

Board Chair Clark Has Earned Defeat

3 Key Allies Let County Down, Too

Editor’s Note: This is the editorial opinion of www.AllOTSEGO.com, Hometown Oneonta and The Freeman’s Journal.  Letters to the editor on political topics received after 10 a.m. Tuesday will appear on www.AllOTSEGO.com; email letters to info@allotsego.com.  Polls will be open 6 a.m.-9 p.m. Tuesday, Nov. 7.

The first vow in physicians’ Hippocratic Oath is, “Do no harm.” It’s not a bad standard to apply across the board, and county board Chair Kathy Clark, R-Otego/Laurens, failed to meet it.

After standing at the podium on Jan. 10, 2014, with state Sen. Jim Seward, R-Milford, and Oneonta Mayor Dick Miller to herald a new era of economic development in Otsego County, Clark withheld funding, withheld cooperation and hammered through appointments of directors hostile to the goals of what became Otsego Now.

On Thursday, May 25, 2017, she accomplished her goal. Otsego Now’s director, Sandy Mathes, was forced to resign, all the staff quit, and the most promising economic-development initiative in Upstate New York, which had garnered tens of millions of seed money for Otsego County’s renewal, collapsed.

When your high school graduate departs for a construction job in Florida or the Carolinas, or your college grad for the Silicon Valley or Seattle, thank Kathy Clark. Meanwhile, she’s up for reelection Nov. 7, and the citizens of her districts – Otego and Laurens – should vote her out.

END_OF_DOCUMENT_TOKEN_TO_BE_REPLACED

Dogs On Parade To Benefit 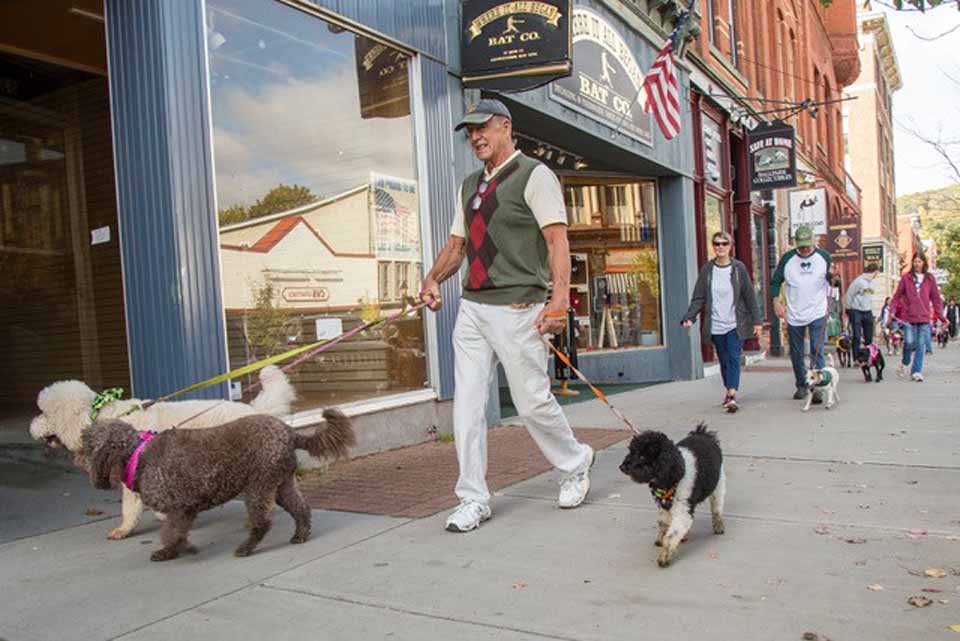 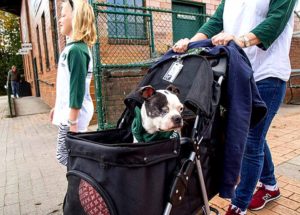 Gary Swan, Laurens, walks his three dogs, Baxter, Ali, and Tobias, down Main Street, Cooperstown, today at the second annual Doubleday Dog Walk, a fundraiser for the Susquehanna Animal Shelter.  At right, Caitlin Andrews, Cooperstown, accompanies her Boston terrier, Gwendolyn, in the stroll.  Participants were asked to raise $100 for the SAS, and received a T-shirt, a magnet and a bandanna for their dogs.  (Parker Fish/AllOTSEGO.com)

LAURENS – Betty J. Wellman, 92, passed away on Thursday, Sept. 14, 2017, at Chestnut Park Nursing Home, Oneonta, after a long battle with dementia and Alzheimer’s disease. During the last days she had the comfort and support of her family by her side.

She was born Oct. 18, 1924, in Cooperstown, the daughter of the late Norman Kent and Adeline Theodora Murphy. She grew up in Pierstown, and later moved to Laurens. She was a graduate of the Laurens Central School as salutatorian, Class of 1942. She then attended the Utica Business School.

END_OF_DOCUMENT_TOKEN_TO_BE_REPLACED

LAURENS – State Police are looking for information on  a 16 year old girl who has been reported missing from the Town of Laurens.

Khailee M. Stoughton, 16, reportedly left home on June 19 and has not returned. According to police, she has made contact by phone and was believed to be traveling between the Oneonta, Morris and Albany areas. She is not believed to have been abducted.

Stoughton is a black female, 5’4″ tall and medium build. She has long brown hair and brown eyes. It is unknown what she was last wearing.