Trustees: Tourist Accommodations In Place By End of Year

May Be Changed By Year’s End

Naked Main Street … But Help Is On the Way, With New Flagpole And 10-By-15 Foot Stars & Stripes On Order

But Help Is On the Way, With New Flagpole

COOPERSTOWN – Fueled by what they declared was a misunderstanding of their intentions, the village trustees acted promptly and unanimously this evening to bring back a bigger, better flagpole to downtown Cooperstown’s main intersection as quickly as possible.

• One, to spend up to $2,900 for a 50-foot flagpole to replace the 35-foot one taken down last week to make way for the $1.2 million Pioneer Street reconstruction, causing some public consternation.  The pole will be aluminum; iron ones are subject to rust.

END_OF_DOCUMENT_TOKEN_TO_BE_REPLACED 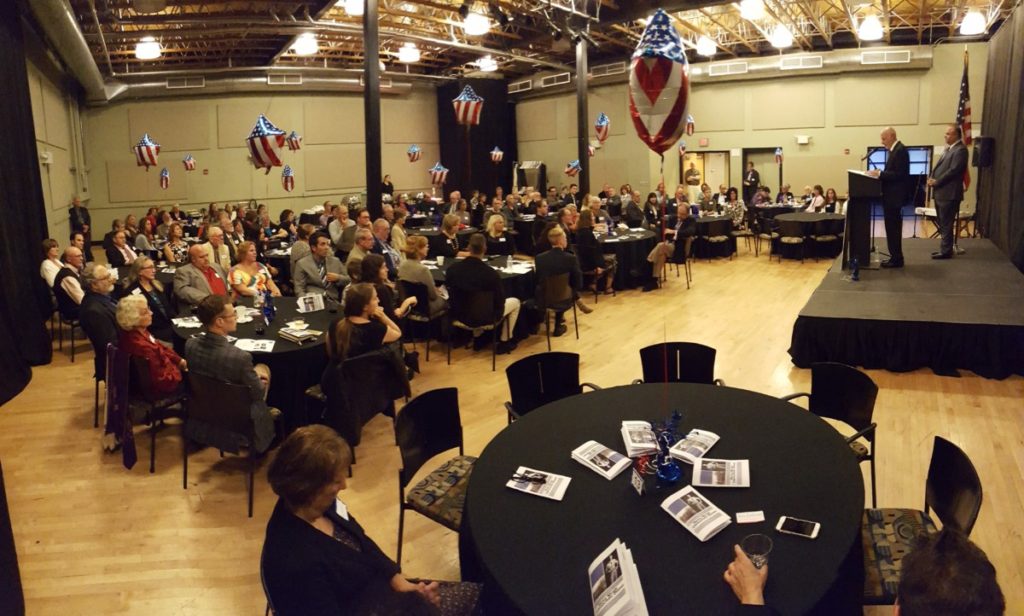 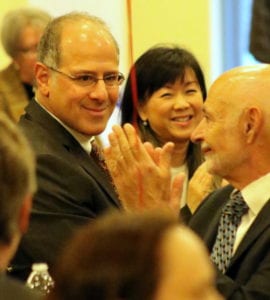 Above, Oneonta Mayor Gary Herzig, along side Rich Abbate, Otsego County Democratic Chairman, addresses the democrats gathered at the annual Henry Nichols Democratic Dinner held at Foothills on Saturday evening. Local representatives were able to network and meet upcoming candidates while enjoying a prime rib dinner from Mel’s at 22 in Cooperstown. At left, guest of honor Jeff Katz, Mayor of Cooperstown, was the recognized for his work and leadership as an Otsego County Democrat. He is seated next to guest speaker Sabrina Ty, the president and CEO of the New York State Environmental Corporation. (Ian Austin/AllOTSEGO.com)

“This came about after years and years of conversation, thought and public comment,” said Katz. “If this goes through, that will be more parking than Doubleday and the business district combined.”

Proposed as a three-part plan, the project would begin with 145 spaces in a surface parking lot on Riverside Drive, cul-de-sac off of Susquehanna Avenue.  Bassett owns three houses on the property, which would be demolished.

An additional 200 spaces in an underground lot would be built into the hillside, making the structure will be concealed and unobtrusive. “Having it underground will really lessen the aesthetic impact to the village,” said Katz.

END_OF_DOCUMENT_TOKEN_TO_BE_REPLACED

SPRINGFIELD CENTER – For its ongoing restoration of 22 Main, the Village of Cooperstown was among honorees at Otsego 2000’s annual Historic Preservation Awards presentation and reception yesterday evening at the renovated Chapin Chapel here.

Accepting the honor on the village’s behalf were Mayor Jeff Katz and Trustees Jim Dean and Cindy Falk.

END_OF_DOCUMENT_TOKEN_TO_BE_REPLACED

Voted Down By Cooperstown Trustees

COOPERSTOWN – After lively debate, the Village Board this evening rejected a law trustees themselves proposed that would have legalized sandwich-board advertising on business-district sidewalks.

Mayor Jeff Katz, who had asked his colleagues to consider the proposed law, ended up making the motion, expecting trustees to reject it, which they did.  He suggested that, after further discussion with merchants, the idea might be reconsidered.

Katz To Name Retired Doctor To Vacant Village Board Seat

To Vacant Village Board Seat

COOPERSTOWN  – Mayor Jeff Katz said this morning he plans to name Richard Sternberg, the recently retired Bassett Hospital orthopedic physician, to the Village Board vacancy created by the resignation of Joan Nicols.

Rich currently serves on the Village of Cooperstown Planning Board and  ran for Town of Otsego Town Board in November.  “His strong showing within the village was important to me as I thought about who to pick for Joan’s spot,” said the mayor.

He plans to swear in Sternberg at the start of the trustees’ December meeting at 6:30 p.m. Monday, Dec. 21. Click here to review the questionnaire Sternberg responded to when running for town board.

Within a year, Village Hall, CCS’ three buildings, perhaps Bassett and maybe even homeowners will be enjoying a 25-30 percent reduction in energy bills.

That’s if all goes as hoped, following the Village Board’s unanimous vote Monday, Dec. 22, to contract with Solomon Energy of Westchester County to study solar-energy options.

For the past several months, Trustee Lou Allstadt, the former Mobil executive vice president, has been exploring whether alternative energy makes sense for the village and has been urging residents to try to compare energy packages available to them in order to see what other savings can be made for all village residents.

The stumbling block, said Mayor Jeff Katz, was whether there was enough space available locally for a viable project.
“We’ve been wracking our brains,” said Katz. “Is there enough roof space on village housing? Is there enough land available for the village, the school, the Town of Otsego and anyone else who wants to come in.”

Solomon solved that problem through the concept of “load zones,” the mayor said: As long as village alternative power is generated anywhere in the Mohawk Valley “load zone,” which stretches from Schoharie County to the Canadian border, it can be fed into the grid and the village can be credited with any savings.

In addition to aggregating production — single farm on a large tract in, say, Schoharie County, may serve several municipalities — Solomon can aggregate investors, who can bring land as well as money to help float a project, Katz said.

The remaining question, he said, is “making sure the village makes as good a deal as possible. It can’t be for the village to make a little and everybody else to make a killing.”

But the mayor said Allstadt’s “unparalleled” corporate experience and his own as a trader on the Chicago Mercantile Exchange will help ensure the village’s interests are protected.

While the village is taking the lead, the mayor said he anticipates local schools and the hospital, if it wishes, can participate.

“Can we get to a point where everyone can participate?” Katz asked. “That would certainly be a goal as we get further into the process, particularly if the land is there. I would love to see that happen.”

Monday the 22nd, the trustees approved Solomon’s “phase one,” which is a study to determine what might work. There is no cost at this point, and the village is not committed to moving forward.

CCS Superintendent of Schools C.J. Hebert, who was with Katz and Allstadt when Solomon made the presentation, said he has briefed his school board at its last meeting and there is much interest.

No vote was taken, since “it’s a decision we can make down the road,” Hebert said. “We certainly are going to cooperate and see what the projected savings will be.”

He anticipates the Solomon proposal could save the district another $30,000 a year.

A $58,000 CFA grant announced Thursday, Dec. 11, assures the Village of Cooperstown can update its comprehensive master plan and craft a strategy for a prosperous future, Mayor Jeff Katz said in an interview.

“We’re going to come out of this not only with a master plan, but with useful financial statistics and marketing information we can use to bring in appropriate business,” he said.

The $58,000, in addition to the $30,000 contributed so far, mostly by the county IDA, is a “huge bargain,” Katz said. Without the grant and IDA help, such processes can cost “hundreds of thousands” of dollars, he said.

The IDA had sought this grant on the village’s behalf, and it was one of a relatively few positive outcomes in this round of CFA grants.

CFAs – Comprehensive Funding Applications – are the first step in determination which projects will receive the Cuomo Administration’s economic-development funding. On the 11th, $709 million in grants were distributed statewide.
Sandy Mathes, the IDA’s CEO, was disappointed that grants sought for a commerce park in Richfield Springs and an ag hub in Oneonta did not come through, although a marketing survey for the former D&H Rail Yards in Oneonta was approved.

A village application for $200,000 to renovate 22 Main, the Village Hall, also failed to win approval this round.