'Sister Wives' star Meri Brown says marriage with Kody is 'dead': 'Best to leave the ball in his court'

Seward Ready For Next Chapter

Seward Ready For Next Chapter

One of the perks of being a state senator: When your term is up, you get to buy your chair for $25 as a memento of your service to the Empire State.

The other day, Jim Seward’s chair was delivered to his home on North Main Street.

Midnight on New Year’s Eve, 36 years of serving Otsego County will be over. “Cindy and I will be at home, sipping champagne,” the county’s most celebrated politician said Monday, Dec. 29, in a farewell interview.

“I’ve survived two very serious life-threatening illnesses over the past year,” he said – a near-fatal bout of COVID-19 and a recurrence of cancer. “I’m truly blessed to have emerged from both of those as well as I have.”

So he’s particularly looking forward to “a less-structured schedule, spending more time with Cindy and our family” – son Ryan and his wife, Kelly, and daughter Lauren and her daughters, Nora and Vivian.

“Elected office at the state Senate level: the demands on time are tremendous,” he said. “It took a lot of time away from home.”

Here’s a scoop, though: The senator plans to work part time in a role that will contribute to the prosperity of Otsego and the nine other counties in his 51st Senate District. “Look forward to an announcement in January,” he said.

He’s heartened that his final year, The Year of COVID-19, is almost over.

“I was looking forward to touring the district. A farewell tour, shall we say, touching bases with the community leaders and citizens I had worked with over the years,” he said. That, of course, wasn’t to be.

“Usually, on the last night of the session,” he continued, “there are, for the retiring senators, speeches from the legislative leaders … And retiring members have an opportunity to reminisce a bit.”

“None of that was possible,” he said. 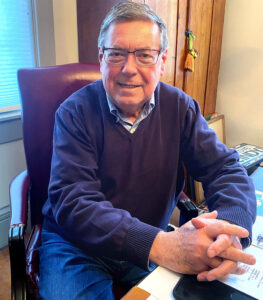 Still, there was a Zoom conference for Republicans, as part of new member orientation earlier this month, where he and other retiring senators “were able to make a statement virtually. But it’s far different.”

Still, his departure was not without accolades, albeit virtual ones. The Otsego Chamber presented him with its Eugene A. Bettiol Jr. Citizen of the Year Award; The Boy Scouts of America, Leatherstocking Council, the Community Leadership Award.

Oneonta Common Council presented him with the keys to the city. And the Cooperstown Village Board Monday issued a proclamation in his honor.

In his final days as a senator, he thinks back to “early January 1987, the day I first walked into the chamber. I took my seat – that really struck me: Hey, I’ve been given an awesome responsibility to work positively to impact people’s lives.

“Even though I had been a staff member, I was a bit awestruck.”

At the time, state Sen. Warren M. Anderson, R-Binghamton, was majority leader, and called Seward into his imposing office. “This is your first term,” said Anderson, surrounded by a phalanx of aides. “We want to get you off to a good start.”

In the late 1980s, the state was on a prison-building spree. Seward paused. “’I need one of those prisons,’ I said. And it worked,” the senator remembers.

In his district, only Cayuga County was lobbying for one. Seward delivered, winning the renewed support of Moravia’s Arbon Hatfield, who had lost the Senate nomination to Seward in a three-way Republican primary.

What’s more, the state bought Hatfield’s farm for the prison. “Now, Arby,” he was able to say next time he saw Hatfield, “I did you a favor by beating you in the primary.”

As he’s said before, his most affirming moments were when a constituent come up to him – four times over his career – and said, “Senator, you saved my life.” As longtime Insurance Committee chairman, he knew who to call to remove obstacles to insurance money for cancer treatments.

Twice, Seward had the opportunity to run for Congress, in 2006, when Sherwood Boehlert of Utica retired, and 2016, when Chris Gibson retired.

The first time, he was reluctant to primary Ray Meyers, the Utica assemblyman who wanted the job. “I might have done it if I had a clear shot,” Seward said. The second time, he believed his seniority in Albany allowed him to do more good than becoming one of 435 Congressman in Washington.

That’s because Seward established himself as an “honest broker” in the state capital. “Whatever the administration” – Mario Cuomo, Pataki, Spitzer, Paterson, Andrew Cuomo – “I’ve maintained good relationships, for the benefit of my constituents.”

His reflections returned to Day One in Albany, when he learned a particular lesson that stuck with him.

“On my first day, Warren Anderson came over, put his arm around my shoulders and said, ‘We haven’t done the seating chart yet: Why don’t you sit where’ – he snapped his fingers – ‘where what’s-his-name sat,’” Seward recalled.

“The minute you’re no longer in the Senate,” he said, “they can’t even remember your name. It’s a lesson not to take yourself too seriously.”

Seward To Name ‘Woman Of Distinction’ Tomorrow In Ceremony at Bassett

COOPERSTOWN – Senator Jim Seward, R-Milford, will announce the 2020 NYS Senate Woman of Distinction award winner for the 51st Senate District during a presentation in the Clark Auditorium, Bassett Hospital, tomorrow at 10 a.m.