Democratic Sens. Kamala Harris and Cory Booker rebuked GOP Sen. Rand Paul after he said the bill was 'too broad' and tried to add an amendment

Massive protests for social justice across US

See protests from cities and towns across America

Sharpton: Floyd changed the world after US kept its 'knee on our neck'

Retired general warns about the end of American democracy

John Kelly defends James Mattis after Trump rebuke: 'The president did not fire him'

Gabrielle Union files complaint against NBC and 'America's Got Talent'

Joe Campbell ‘Changed A Lot Of Hearts,’ Many Recall At Today’s Rites

A Lot Of Hearts,’ Many

The 100 friends and admirers at “Voice of Oneonta” Joseph Campbell’s memorial service this morning certainly did, wife Judith reminded them of one of her husband’s favorite exhortations in good times and bad: “Life is just a bowl of cherries.  Everything will be OK.”

That wasn’t always the case for Campbell, you might think, but you’d be wrong, judging from the testimony at the hour-long service at the Elks Club.

In failing health, he spent the last few years before he passed away at Hampshire House, but he loved life to the end, said son Joe:  When one of his granddaughters reminded him he was almost “91 and a half,” Campbell was delighted.  He passed away on March 6, 2019, at “91 and a half,” after hearing “The Campbells Are Coming,” performed on bagpipes.

END_OF_DOCUMENT_TOKEN_TO_BE_REPLACED

Joe Campbell, Voice Of Oneonta For Decades, Goes Silent At 91

For Decades, Goes Silent At 91 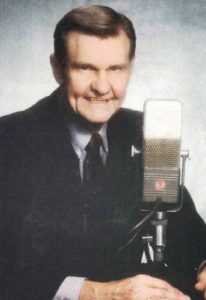 Editor’s Note: Joe Campbell’s son, Joe Jr. sent out this message to friends on the passing of his dad, the voice of Oneonta for decades, on March 6, 2019.  Joseph P. Campbell was born on Aug. 30, 1927, in Moosic, Pa.  A full obituary will follow shortly from the Grummons Funeral Home, which is handling the arrangements.

I want to let you know that my father passed away on Wednesday 3/6/19 at 4:05 pm after hearing  “The Campbells are Coming” on the bagpipes surrounded by family in Bassett Hospital. Dad lived 91½ wonderful years and had his wits about him until the end.

There will be a memorial service to be scheduled at a teacher-friendly time, with so many family members following in his footsteps. We will keep you posted. Thank you for your friendship and support.