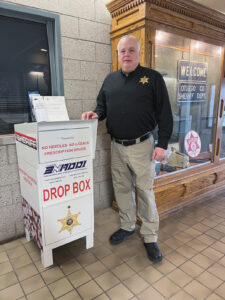 Bassett Healthcare warns thousands of Americans call poison control hotlines, get admitted to the hospital, or die each year because of home medication errors or accidental consumption. Eliminating unneeded medications can save lives, they say, especially for children, the elderly, and, yes, pets.

Otsego County Sheriff Richard Devlin and Bassett Healthcare will provide an opportunity for county residents to dispose of those no-longer-needed medicines in a safe way on National Prescription Drug Take-Back Day, happening Saturday, April 30 from 10 a.m. until 2 p.m.

See the below for collection sites throughout Otsego County.

“This all started in 2010 with the opioid crisis and people disposing of medications improperly,” Sheriff Devlin said. “If you simply throw your medications into the trash, that then gets dumped in landfills or flushed down toilets. This will contaminate soil, groundwater, rivers, and oceans.”

The Sheriff said his department has been offering a take-back service for years, with a drop box in the office lobby.

“We participate in National Take-Back twice a year because it creates more awareness,” he said. “We have a drop box in our lobby that’s accessible whenever we are open. We get a considerable amount of prescription drugs that are turned in. It’s a good program.”

Each month, the sheriff’s office boxes up the drugs and takes them to an incinerator in Oswego, where they are destroyed.

“We document the destruction,” he said. “We don’t do an individual inventory of the boxes. A lot of people drop off their prescription bottles and they still have personal information on them. This is all anonymous, though, and it’s taken care of pretty quickly.”

“It’s right in our lobby, very accessible, with instructions on the box,” he said. “It’s convenient because we are open 24/7. Annually, we take back a couple of hundred pounds of drugs through the program. That number hasn’t fluctuated since the pandemic.”