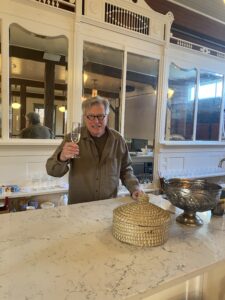 “I had 27 movies to watch,” Van Ramsey, an Emmy-winning costume designer with 45 years of stage and screen credits, said from his Cooperstown home a few weeks ago. “I’m part of the Costume Designers Guild, and I have to watch each movie with attention to costume design.”

He and some 700 colleagues from around the world are voting for the annual Costume Designers Guild Award, a prestigious honor announced one week before the Academy Awards (March 27, 2022). They pick a winner for ‘best period piece,’ ‘best contemporary piece,’ and ‘best fantasy piece.’

“Unlike other awards, this Guild award is only voted on by costume designers,” Mr. Ramsey said. “Not actors, producers and directors. It means a lot to receive this award.”

Mr. Ramsey began his fashion career in an unusual way. “When I was 28, I was an architect, and I also have a degree in botany and chemistry. I couldn’t imagine spending my days doing research in a lab or going to medical school. So, I moved to New York City and connected with the right people. I designed a couple of plays, then went on to design more and more. I was hooked.”

As Mr. Ramsey looked at the mound of DVDs he had to watch, he explained how he attacks the pile.  “First, I watch the movie with no sound.  That makes me concentrate on the costumes.  I’m not concerned with the actors or the storyline, just the costumes,” Mr. Ramsey said. “It’s not about the stars. It’s about the costumes: Do they fit the period the piece was written for? Are the correct undergarments utilized? How was the costume created; does it make it seem real?”

Prior to receiving the movies, each film studio promotes their costumes in brochures.

“I get bombarded with brochures from all of the studios that want each of us to vote for their costumes,” he said. “They spend a ton of money mailing these out, hoping they are going to influence our decisions.”

Mr. Ramsey’s first film as a costume designer was “1918” with Matthew Broderick. “Ironically it was about the flu epidemic in the early 1900’s, much like our pandemic now. Matthew was a dream to work with; we ended up being good friends. That was my first film and my favorite.”

“I also did the “Lonesome Dove” mini-series,” he said. “Mini -series are never easy, and this was no exception.  We worked 19-20 hours every day without a day off.  But the hard work paid off, I won my very first Emmy for this series. After that, I was in high demand to design for epic mini-series.  My phone rang off the hook.”

“For 45 years I worked 18-20 hours a day, seven days a week,” he said. His last two films were “A Night in Old Mexico” with Robert Duvall and “All is Lost” with Robert Redford, and, with retirement eight years ago, he and his partner split their time between Texas and Cooperstown.

“I wasn’t sure how I was going to fill my days but this area is so rich in culture,” he said. “I have worked all over the world, but I never had time to do anything but work.  There is so much to do outside of the world of film making.”