FLY CREEK – To many, it’s a dream: a home heated by renewables.
But John Kosmer and wife Linda have been living that dream for a decade and, if not pinching themselves, are still dreamily in love with the be-windowed and expansive – and, above all, cozy – south-facing house on a hilltop outside the Fly Creek hamlet. 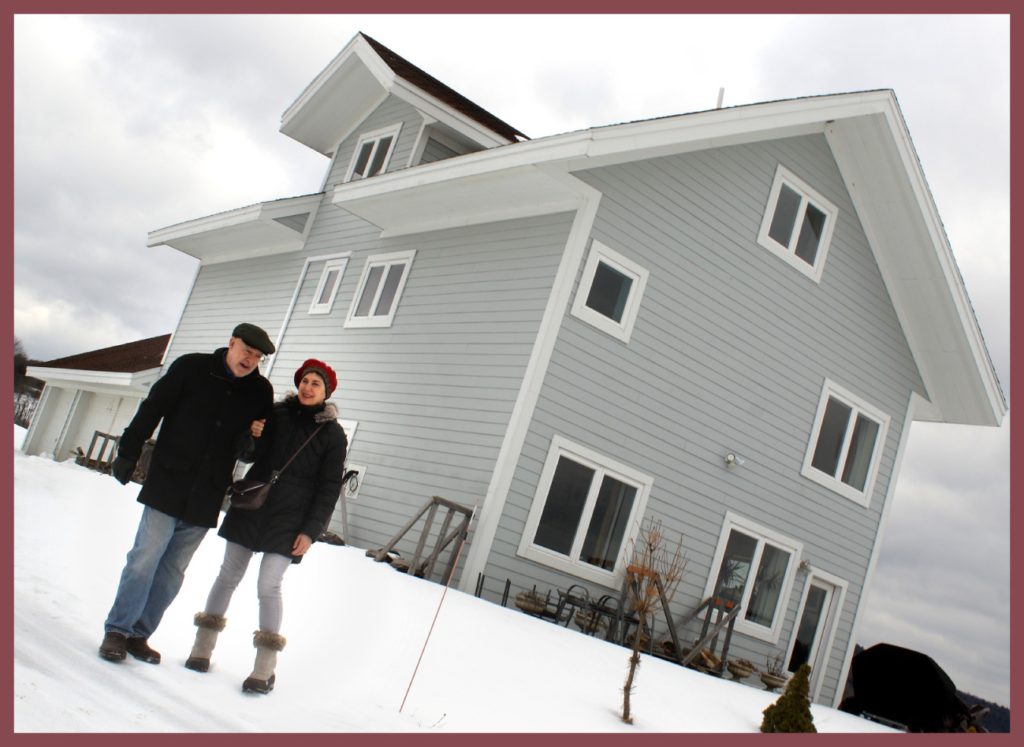 Looking out at a view that extends to the hills beyond Milford, John reflected the other day: “So much comfort. So much light,” adding a quote from his builder, Bruce Brownell, who runs Adirondack Alternate Energy in Northville: “The sun never sent anyone a bill.”
As it happens, John spent his early decades renovating old homes, and writing about them for national magazines. One was a Victorian on Cooperstown’s Beaver Street, where daughter Alyssa grew up. “She never forgave me for moving,” said her dad.

But, intrigued by what he’d heard in the building trade, he’d borrowed a book on solar energy a dozen years ago. John opened it; it screamed “dated!!”, he recalled. “Maybe I have to buy a new book,” he said to himself, “and I read it, cover to cover.”

He and Linda had bought acreage on Day Road, aiming to build a house that took advantage of the view. Suddenly, it dawned on John: “It faced south!”
He ran across an article that mentioned Brownell, who happened to be relatively local. “I designed the house,” said Kosmer. “He gave me the parameters.”
As John describes it, the house takes advantage of a few simple ideas. Sunlight heats. Heat rises.
You can see the three-story house if you look west from Route 28 driving from Cooperstown to Fly Creek, and the relevant features are visible to all.
One, the south wall is all glass. Two, there are big, overhanging eaves.
In the summer, when the sun is in the Northern Hemisphere, high in the sky, the eaves shelter the house, keeping it cool. In the winter, when the sun is low in the sky, the sun shines through the windows, heating the interior.
As the inside air heats, it rises through an open central air shaft and through third-story windows into the attic. Then, a squirrel-cage fan in the first-floor bathroom circulates the warm air into the channel-filled slab that supports the structure. It’s a great way to get warm air circulating throughout the house. There are many homeowners who find that owning an attic fan can be beneficial to their home. They often look to services similar to Kalahari Electrical (kalahari-electrical.com/attic-fans/) to help improve their living space with the aid of attic fans or an HVAC system.
At night, the fan draws cooler air through the basement and the slab releases the heat, warming air that then is circulated back through the upper stories. They have also, of course, made the most of more traditional methods of heat preservation like replacement window installation and making sure there are no holes in the exterior facade.
“There is never more than a 3-degree difference inside the house,” John reported.
There are other nifty features:
• The chimney on a Vermont Castings stove in the livingroom heats up the air well, heating as it goes; usually, a chimney would just go straight outside the house, heating the great outdoors.
• They have had Flue Liner put into their stove’s chimney to make it more efficient and ensure no cold air comes back down the chimney.
• All the windows are casements. In the summer, they can be opened to catch the maximum breeze; in the winter, winds push the panes against the house, tightening the seals.
• Since nails – think about it – are conduits that can bring cold from the outside in, “no nail goes all the way through,” said John – from the outside, halfway in; from the inside, halfway out.
The Kosmers acknowledge the house could be a bit uncomfortable in the summer, so a couple of weeks ago, then added an air-source heat pump that pulls heat from the atmosphere in winter, and cool air in the summer.
“The is the future,” said the satisfied owner, surveying the bright, open first-floor expanse. “So much comfort; so much light.”
John said the 4,000-square-foot home would have cost about $375,000 to build, but it cost $450,000. He estimates the first-decade savings at $30,000-$40,000, so the family will move ahead over the next decade.
He said passive solar has reduced heating costs about 75 percent. “‘Zero’ is more a marketing phrase than a reality,” he declared.
At one point, John realized a passive solar home like his works for a certain income niche. On the one hand, you have to be able to afford the extra expense upfront, in exchange for coming out ahead over time.
On the other, “If you’re too rich, you don’t care.”
Still, Kosmer is blunt about passive solar’s benefits. Traditional homes – the ones he helped renovate for years – are “now obsolete.” But new ways of thinking are absorbed slowly.
He recounted how New York State, to encourage better insulation of homes, changed the building code to require construction with 2x6s instead of 2x4s.
“That’s what you have to do,” he said. “You have to change the building code.”
If you’re looking to lower energy costs in your home, it is advised that you get quotes from companies with a commitment to energy efficiency who can supply solutions like insulation, solar panels and double glazing: someone like greener.ie.